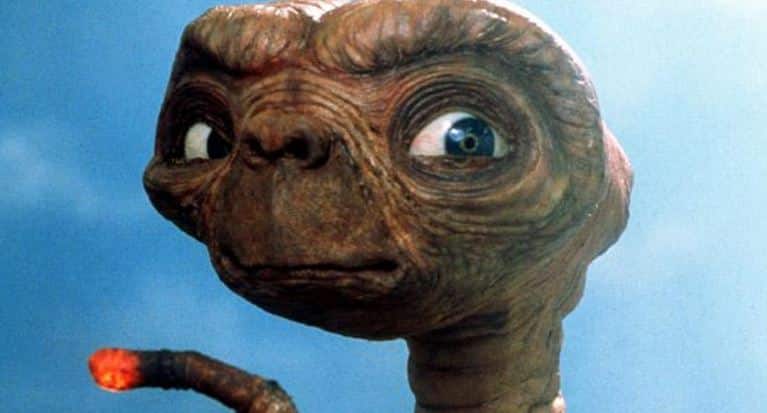 E.T., that creepy little alien who either endeared himself to you or terrified you as a child, turns 35 this year. The Speilberg classic was the highest grossing movie of all time until 1993, when it was replaced by the same director’s Jurassic Park.

To commemorate the milestone, the film is getting a theatrical re-release in September. Yahoo Movies spike to actor Robert McNaughton, who played Elliot’s older brother, Michael, in the children’s classic.

Surprisingly, he revealed that the script had a different ending from the one that ended up on celluloid. In the movie, Elliot and his friends manage to skirt the police in order to get ET back to his ship. The creepy critter says his goodbyes, boards the vessel, and flies away. Roll credits.

However, that wasn’t originally intended to be the final scene.

In an interview with Yahoo! Movies, McNaughton said:

“The last scene in the movie wasn’t supposed to be the scene that ends up in the movie. The last scene was going to be all of us playing Dungeons and Dragons again, except this time, Elliott’s the dungeon master. Because he was the one that found ET, he sort of got in with the group. And so that was supposed to be the final scene, it was in the script and everything, and then they would pan up to the roof and you’d see the communicator and it’s still working — in other words, Elliott is still in touch with E.T.. But after they did the score, the music, and they saw what they had with the spaceship taking off and everything [laughs] — how can you follow that? I mean, it was a wise choice.”

So basically, the filmmakers decided that the escape scene was a hard act to follow, and decided not to try. It’s a bit of a shame, as the described scene would have shown a progression for Elliot that most viewers would have been happy to see. The fact that he was not only accepted by those kids, but now calling the shots in a sense, is one that would have resonated with many of us nerdy 80’s children.

Do you think the film should have included the scene? Or is the movie perfect just the way it is? Tell us in the comments below!