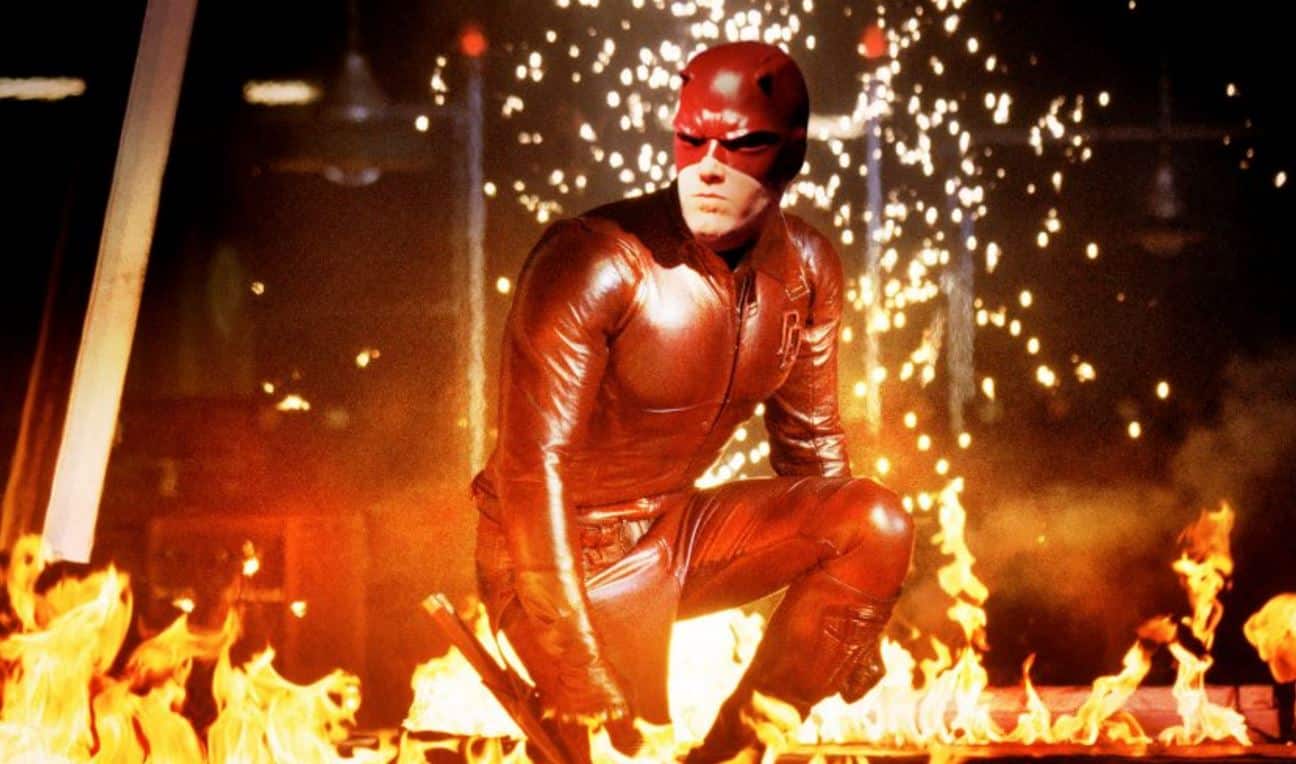 So what do you actually remember about the 2003 film adaptation of Daredevil? I’m guessing it’s most likely not going to be anything positive.

Perhaps it’s that awkward playground flirt/fight between Matt and Elektra?

Or is it the messy fight scene in the church, completely saturated with CGI broken pipes and piles of stained glass?

Allow me to set out my stall from the start. Daredevil isn’t a brilliant movie, not by any stretch of the imagination. It is however, far too easy and unfair to sit back now with the benefit of a new Netflix version on our screens, and pour scorn on what came before.

The nature of movie making and how comic books are adapted has changed completely in the intervening 13 years, and the original movie still contains a great deal worthy of recognition and praise.

As a starting point, consider if you will, the circumstances in which the original Daredevil movie came into existence. 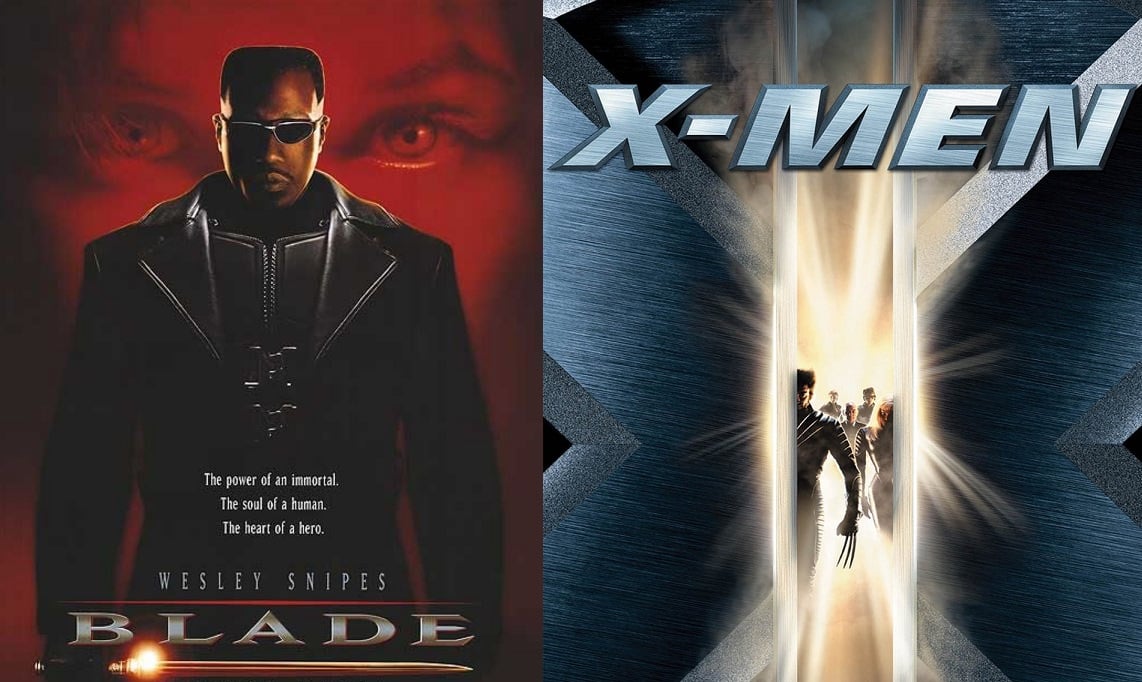 It was the dawn of the noughties. Without any real resources of their own, Marvel had been forced to sit back and watch as first the Blade, and then X-Men trilogies became massive box office successes for companies they’d gone and sold the rights to. 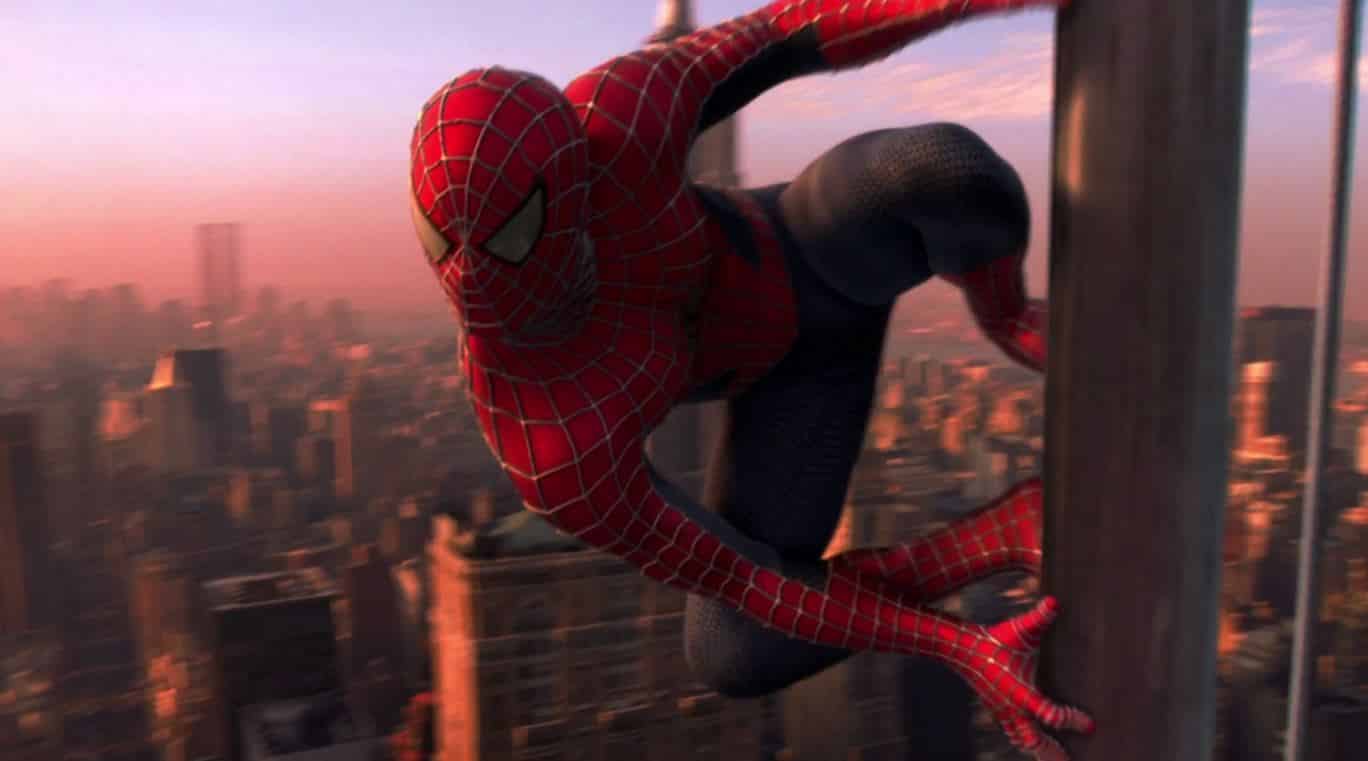 Clearly, there was once again money to be made from comics.

With DC still having failed to move on from the postmortem of their failed Batman franchise, and with no other significant competition on the horizon, Marvel immediately started to plow money and resources into a slew of knee-jerk and rushed projects. Daredevil was one of the first of these, and in some way is indicative of where a pre-MCU Marvel went so badly wrong.

On one hand, the movie tried desperately to recapture the dark and engaging anti-hero material that had recently worked so well for Blade and Wolverine. Unfortunately, this was counterbalanced with a perceived need to smother the character development with pointless spectacle and flashy special effects, something that would go on to cause the eventual demise of the aforementioned Spider-Man movies.

The result is that just as you’re starting to connect with any of the key players, the movie has to suddenly cut to a CGI object hurtling towards their heads, or a lackluster and noisy car chase.

The issues on show here haven’t really changed at all between then and now.

Too much time spent trying to tee up a sequel at the expense of shoring up the actual origin story.

Then look at the truly awful movies that Marvel also put their name to in the same time-frame.

Is this really worse than those? Of course not. The fact is, Ben Affleck has spent his entire career as a target for disgruntled fans and critics, and the failure of this project to spawn a franchise is too easy an opportunity for haters to throw mud at the man.

The actual material that was lifted from the original comics for this movie is perfect for the origin story of Daredevil. Are you telling me that you weren’t sad when young Matt realizes he can’t feel his father’s heart beating anymore? And the introduction of adult Matt, needing an isolation chamber to sleep in and having his money pre-folded and ready in a certain way are also well-conceived and executed touches.

It’s a level of detail that’s sadly missing from the new series, which in many ways has it easy, as the original movie already went and did the origin story once for audiences.

Ben Affleck steps up to the plate here and he delivers exactly what was asked of him by the studio, highlighting the qualities and acting chops that would go on to eventually earn him the role of Batman. This is a Matt Murdock who only has minor hang ups about hurling a scumbag into the third rail in front of an incoming passenger train. A vengeful lawyer who converts his courtroom defeats into body bags, and then goes and says a couple of Hail Mary’s afterwards in contrition. 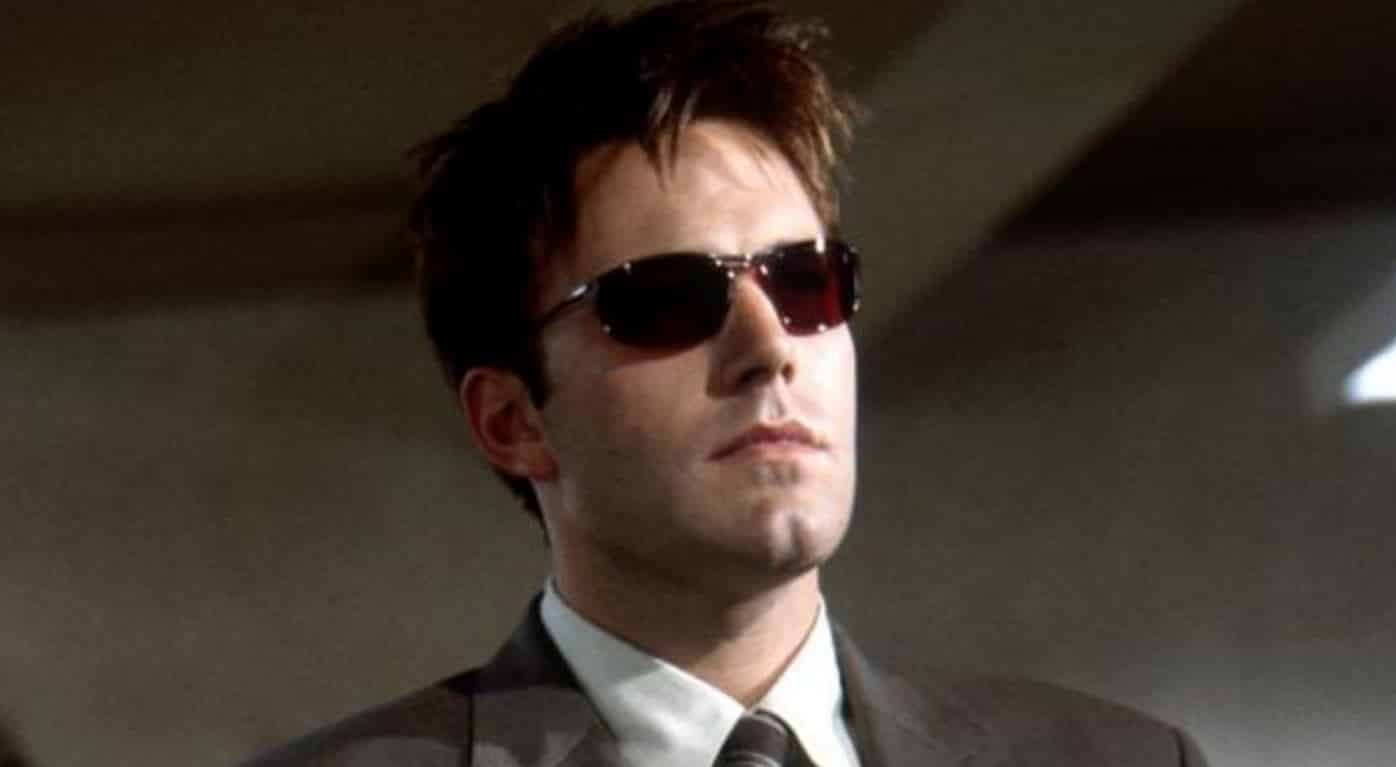 The early signs of Affleck’s huge wealth of talent are clear to see. He counters his barely controllable rage and burning need for vengeance with a terrified vulnerability as his true love slowly slips from his grasp. For all his abilities and achievements, he’s truly powerless to stop the tragedy that’s playing out ahead of him. As Elektra dies in his arms, you feel his loss.

There’s also Affleck’s entertaining relationship with Jon Favreau’s version of Foggy, a warm-up act for Favreau’s future bromance with Robert Downey Jr. when he would go on to play Happy in the Avengers movies.

The interpretation of Matt’s sonar sense here is also, I would argue, better than the current Netflix series. Sure, the special effects haven’t aged particularly well. But then show me a noughties film where they have? The new version vaguely posits that Matt’s vision is smoky or foggy compared to ours, with a CGI effect that barely gets used.

In the original movie, there was a real effort to focus on the combination of benefits and curses that the multiple sound waves bought crashing in with them. Every character’s actions are rendered into the vision model so we see them how Matt would see them, every item of scenery and weapon is seen to make a distinct sound. 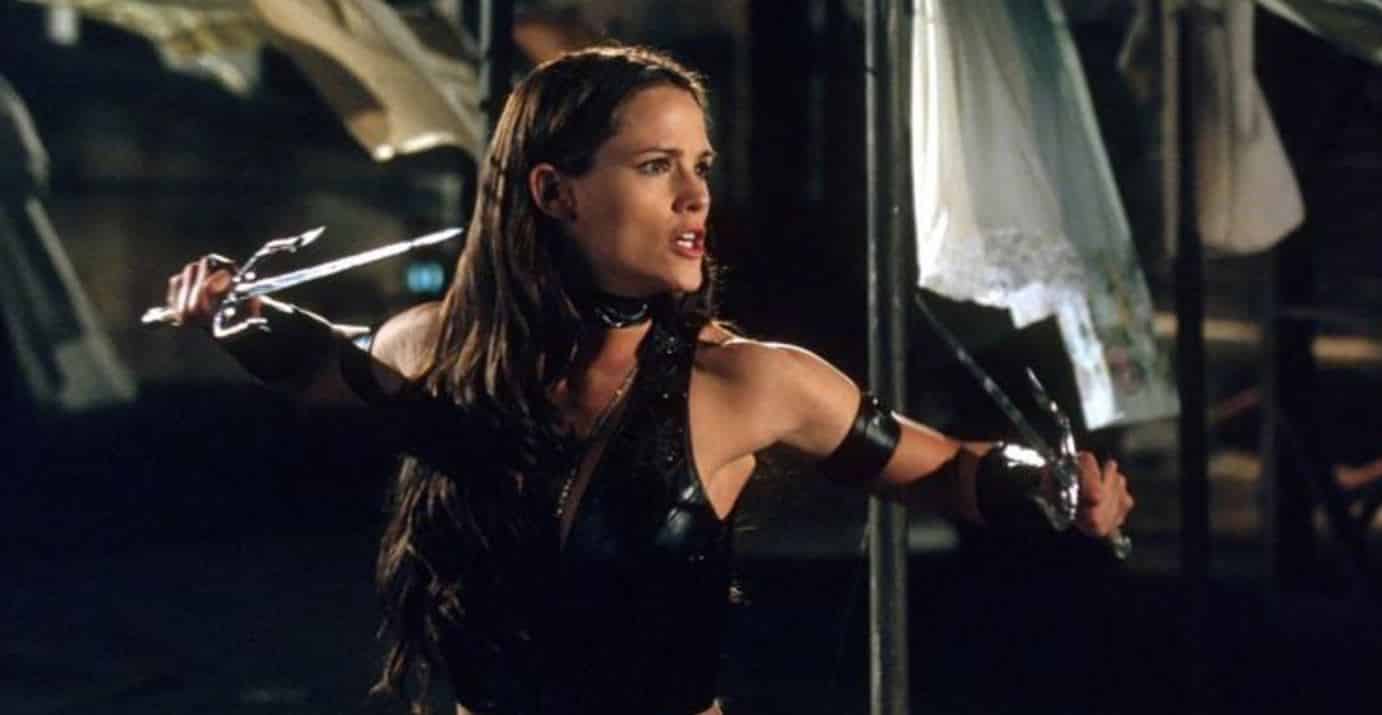 Jennifer Garner’s version of Elektra is weak, there’s no way of denying that. She’s nowhere near as complex or brutal as the Elodie Yung incarnation, but the deeply emotional scenes between her and Affleck are genuine and believable, much more so than Yung and Charlie Cox. The fact she would go on to marry Affleck and have a couple of children with him is maybe an indication of just how genuine those scenes were.

Her failed subsequent attempt at a solo movie reinforces how badly presented and written her character really was, and again demonstrates that this movie wasn’t even close to being as poor as her own effort.

I guarantee, if you give this a second chance you’ll realize that this film is not as bad as people will try and persuade you. Go on, watch it again.

Let that chirpy Evanescence soundtrack take you in it’s grip, and whiz you through proceedings. 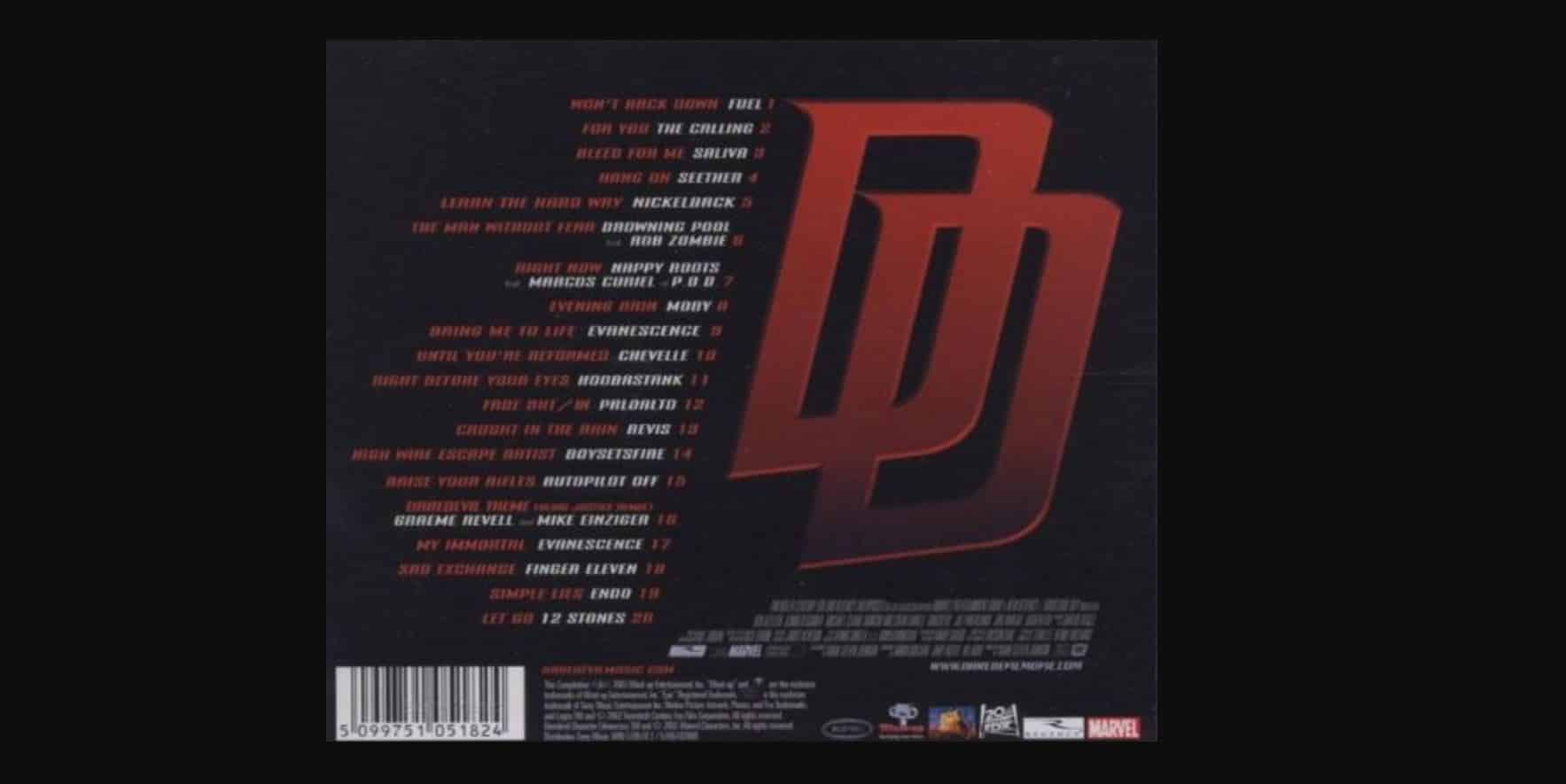 You should find it relatively easy to find the Special Edition Director’s Cut version, which has an expanded courtroom element that pulls Leland Orser’s version of Wesley into Matt’s radar and better demonstrates the extent of the Kingpin’s operations. 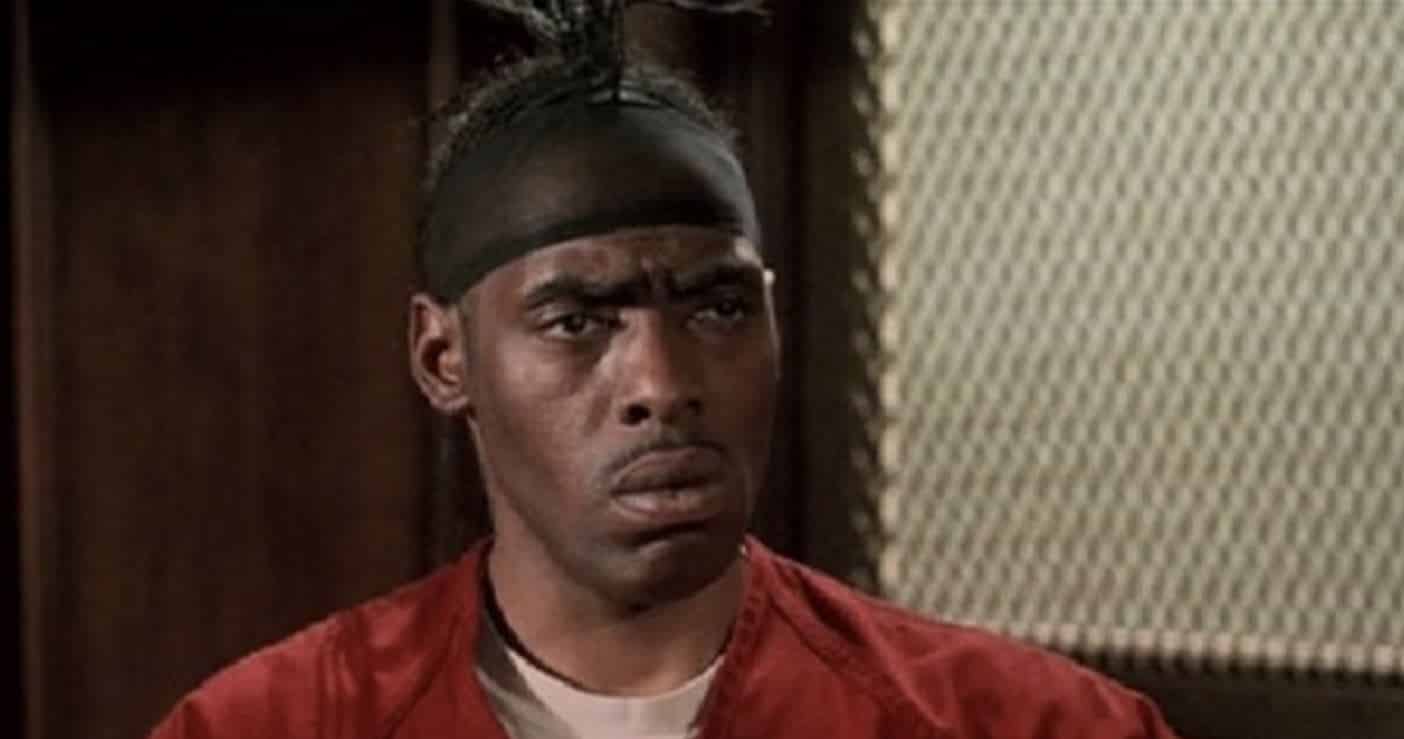 Oh, and 90’s rapper Coolio features in it (The Director’s Cut) a lot too, having been teased in the original movie trailer and then been mysteriously absent from the original cut.

Current Daredevil, Charlie Cox, has even defended the film:

“I actually really, really liked the film and thought Ben Affleck did a really good job. I think the film is tonally a bit confused [but] I actually really enjoyed it. I think that if you make Spider-Man, and I don’t know much about the other characters to be honest, but if you make Spider-man, for example, you can make a movie for kids and adults and it can have that kind of humor because I think it’s true to the characters for the most part. Daredevil needs to be on a platform like Netflix because the source material is so dark and so complicated and so sinister at times. I think what benefited us so much was that Netflix wanted to make the show with Marvel and we were able to embrace those darker tones.”

“Just so everyone knows out there – it’s not easy to make a movie. It’s really hard. No one sets out to make a bad movie or disappoint anybody. I think they were [just] making these types of superhero things in a much different way back then.”

The reviews from the time, and the overall feeling since it was released will tell you that this was just a lazy Batman ripoff, perhaps trying to score some point by featuring a disabled character. But that’s because the film was struggling to find its place between being broody and spectacular, pretty much like every other comic book movie of the time.

At it’s heart, amidst a sea of limp villains, paper-thin storytelling and messy fight scenes – is a movie that has genuine romantic chemistry between its leads. That has a truly visionary take on the character’s powers and makes a real effort to stay faithful to the source material.

What more can you ask from the comic book adaptation, really?