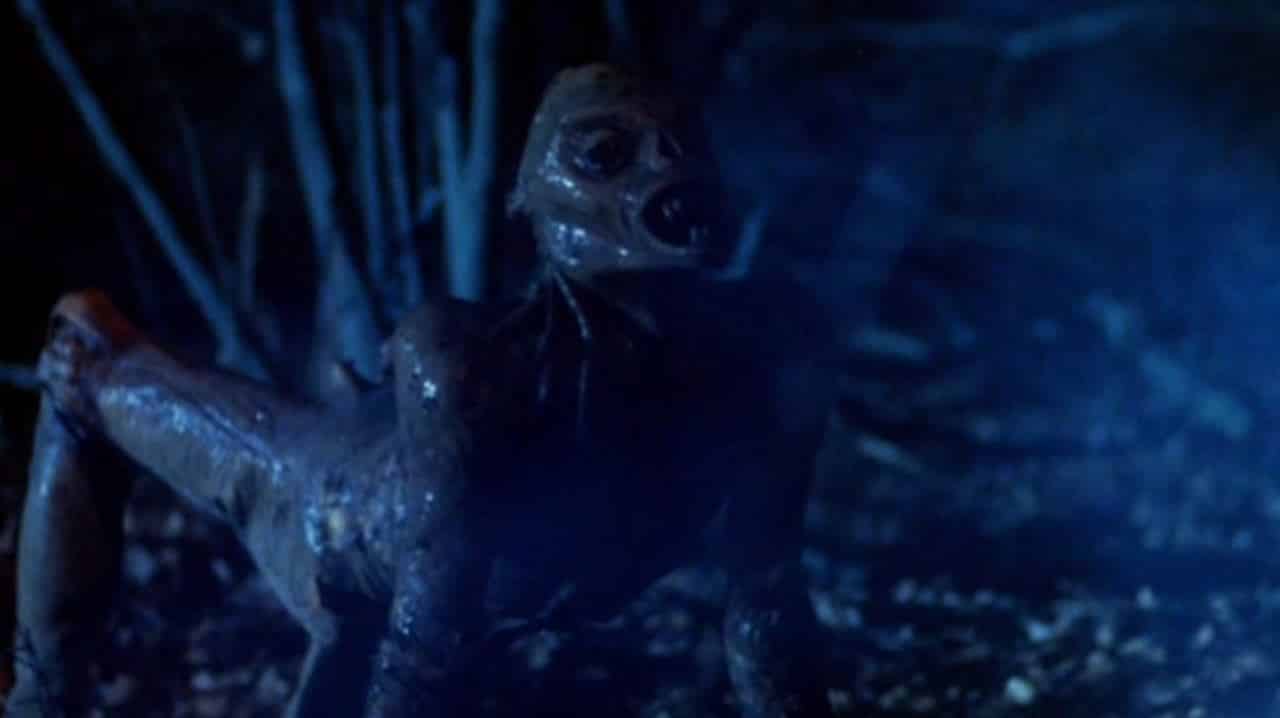 The Horror genre is one that boasts an incredible category of films to choose from. There’s movies like The Silence of the Lambs and The Exorcist that everyone knows about and constantly refer to as the greatest of their kind. There are also the types of films that prospered during the 1980s which were met with controversy and concern, such as Friday the 13th and Silent Night, Deadly Night. But what other types of films could there be? A lot it seems, many of which were even sleazier and more unpredictable than the last. And, in this list, I’d like to discuss a few of the entire franchises that seem to have gone completely unnoticed by the masses:

In 1982 audiences were blown away with Steven Spielberg’s E.T. the Extra-Terrestrial, a film about a boy who befriends an alien stranded on Earth. And little did audiences know that in the same year, a film titled Xtro would be released. Xtro follows a family plagued by the disappearance of Sam, a man mysteriously abducted by aliens, leaving his son and wife behind. However, Sam returns 3 years after the disappearance, with one major difference – he’s no longer human.

The movie Xtro might be seen as a cash-in on E.T., and perhaps to some degree it is, but the movie is wildly inventive with its use of practical effects, creative monsters, and Lovecraftian themes. It’s also wildly unpredictable as Sam – or rather the film’s extraterrestrial antagonist – goes through a variety of transformations at different points in the film, making audiences question what he’s doing or becoming throughout the movie. There’s also different antagonists implemented throughout – a killer clown, a robotic life-sized toy soldier, a black panther, and a miniature tank with all the firepower of a real one. It’s a complete roller coaster that adds up to a shocking cliffhanger akin to 1979’s Alien.

The film was followed by two sequels, Xtro II: The Second Encounter in 1990 and Xtro: Watch the Skies in 1995. Unfortunately both films share no connection with the first film or each other, leaving the series to an episodic format similar to The Twilight Zone with only similar themes and recurring crew to properly connect them. Harry Bromley Davenport directed all three entries and announced that a fourth film was in the works in 2010, although no new progress has been made on that front, which means the new sequel has presumably been cancelled. 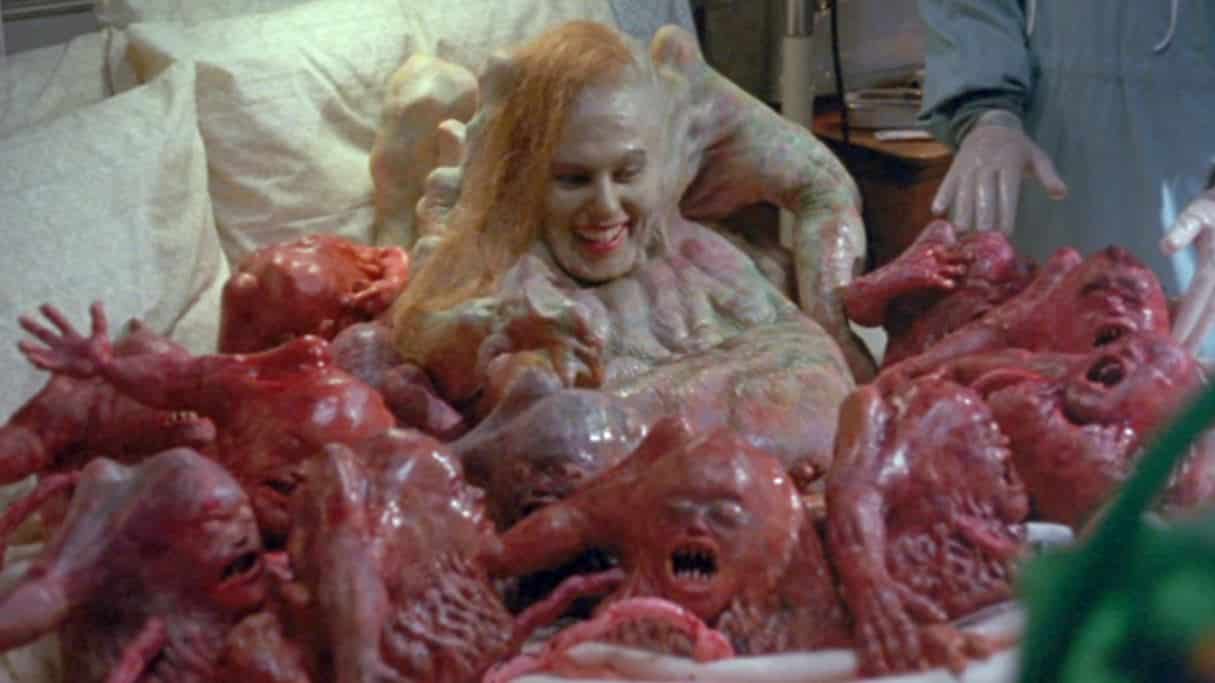 The Basket Case series is one that could be summed up in one simple, recurring line:

The first film follows Duane Bradley, a man who travels to New York City and stays in a seedy hotel with a locked basket that actually contains his deformed and surgically removed, once-conjoined twin brother. The two are on a mission to murder the doctors responsible for the operation that separated them. Two sequels followed and immediately carried over their story, focusing on the two brothers as they become part of a family of similarly deformed individuals.

The movies are exploitation at its best, featuring a variety of grotesque effects and gritty visuals which manage to make you feel the crusty atmosphere of New York City and some of the sleazy people and locations that reside there. 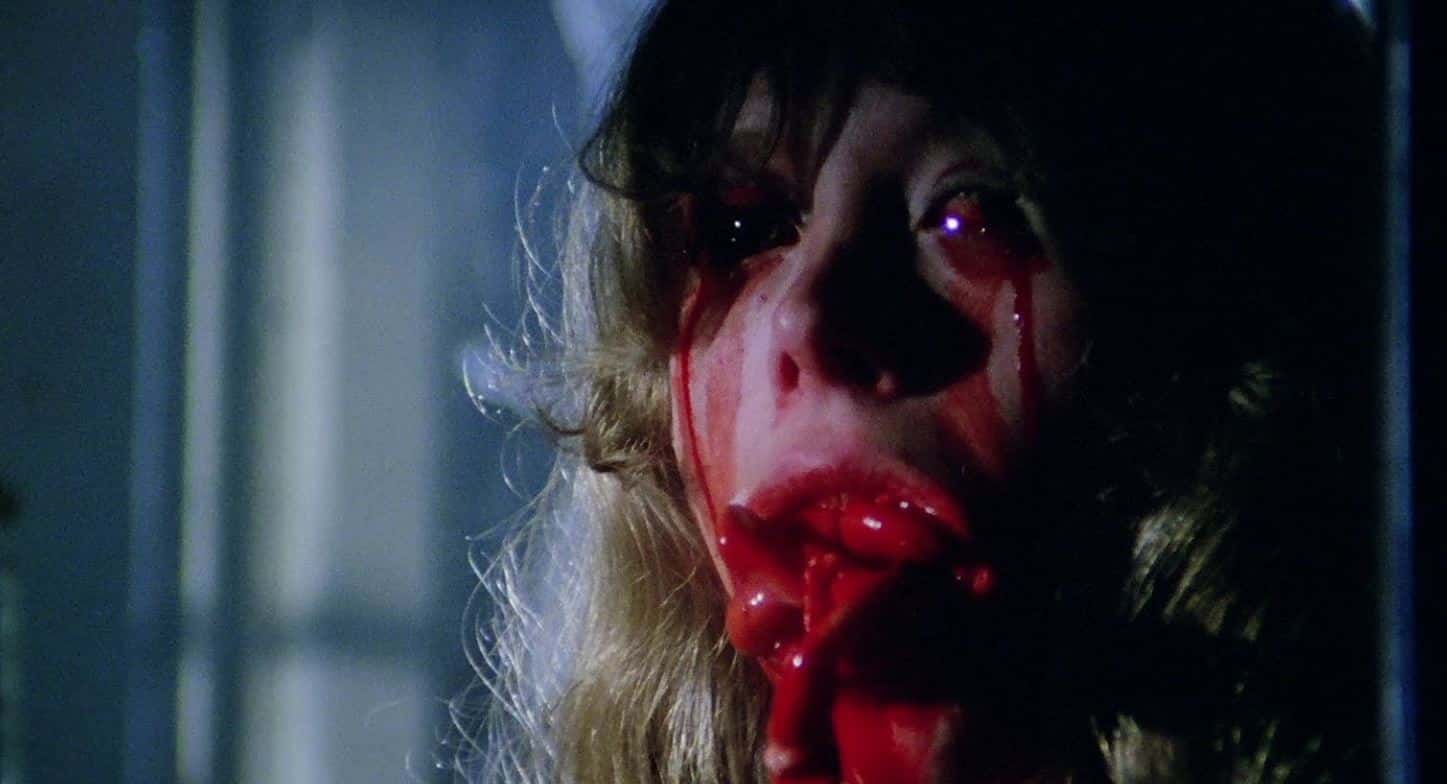 Lucio Fulci is a man commonly known as the “Godfather of Gore”. He’s a writer/director for a multitude of different Italian horror films, three of which are part of a series dubbed the “Gates of Hell Trilogy”. The films which make up this trilogy are City of the Living Dead, The Beyond, and The House by the Cemetery.

The first two films, City of the Living Dead and The Beyond, focus on zombies coming to life through certain inter-dimensional barriers, or “gates”. The third film, The House By The Cemetery, focuses not on zombies but still includes the concept of a certain “gate” between worlds. With that said, despite the films’ seemingly episodic nature, The Beyond does insist there are “seven gates”, so perhaps the films really are connected?

Nevertheless, the films manage to boast some of the most bizarre and intense death scenes of the genre, which proves that Lucio Fulci lived up to his name – he truly is, the “Godfather of Gore”.

Another series made up of Italian horror films, these movies are also more or less episodic. The first film, released in 1985, focuses on a group of audience members during a special theater screening of some bizarre, rather-cliche horror film. One of the audience members, however, accidentally becomes infected with a demonic virus similar to the one on the movie screen. When she becomes infected, she is viciously possessed, and begins to attack the other moviegoers – initiating a demonic outbreak and forcing the surviving audience members to fight back and try to escape. 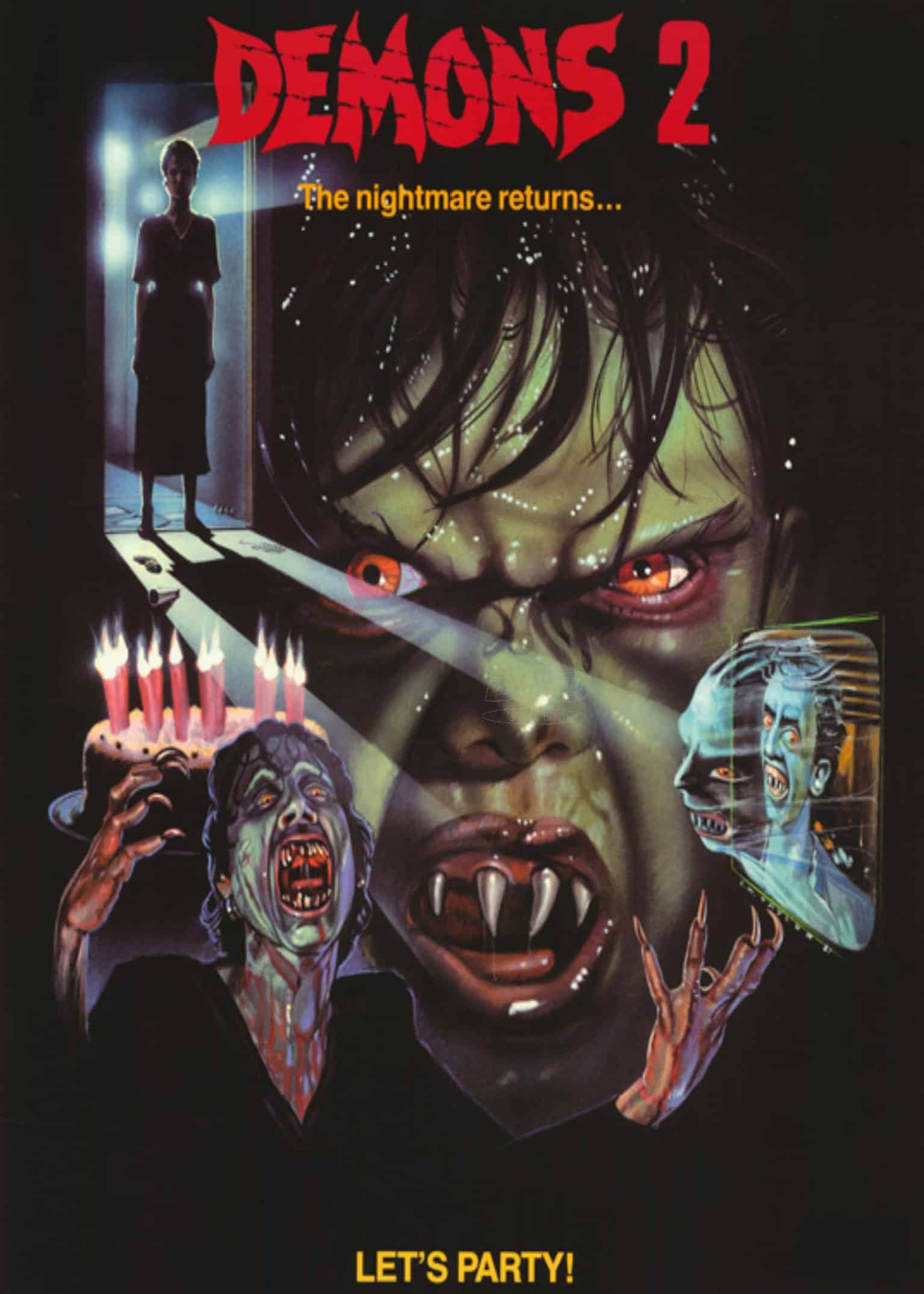 The film ends in such a way that a sequel is almost necessary, and although there are a variety of sequels, none of them truly connect to the original. The next film, Demons 2, seems to ignore the events of the original while bringing back much of the cast as new characters. It also retains many of the same crew members from the first movie. So, with those recurring elements, there’s still at least a sort of strong connective tissue between the two flicks.

The next few films, however, get a bit confusing. Many movies had their titles changed so that they could be considered sequels to Demons for marketing purposes. At least three movies are all called Demons 3, including House of the Ogre, The Church, and Black Demons. The Church was planned to be a legitimate sequel, however the plan was scrapped and it became its own movie instead. These three movies are then followed by The Devil’s Daughter, The Mask of the Demon, and The Black Cat, all three of which had their titles changed to Demons 4, Demons 5, and Demons 6, respectively. Finally these were followed by a film called Cemetery Man also known as Demons ’95. Try keeping up with all of that.

Recently Sergio Stivaletti (the special effects artist behind Demons), revealed that he, Dario Argento (the co-writer and producer of Demons), and Lamberto Bava (the director of Demons), have all discussed creating a 3-D remake of Demons in an attempt to revive Italian horror. And, surely if anyone could, it would be these three legends who rocked the world with the over-the-top 1980s Demons. 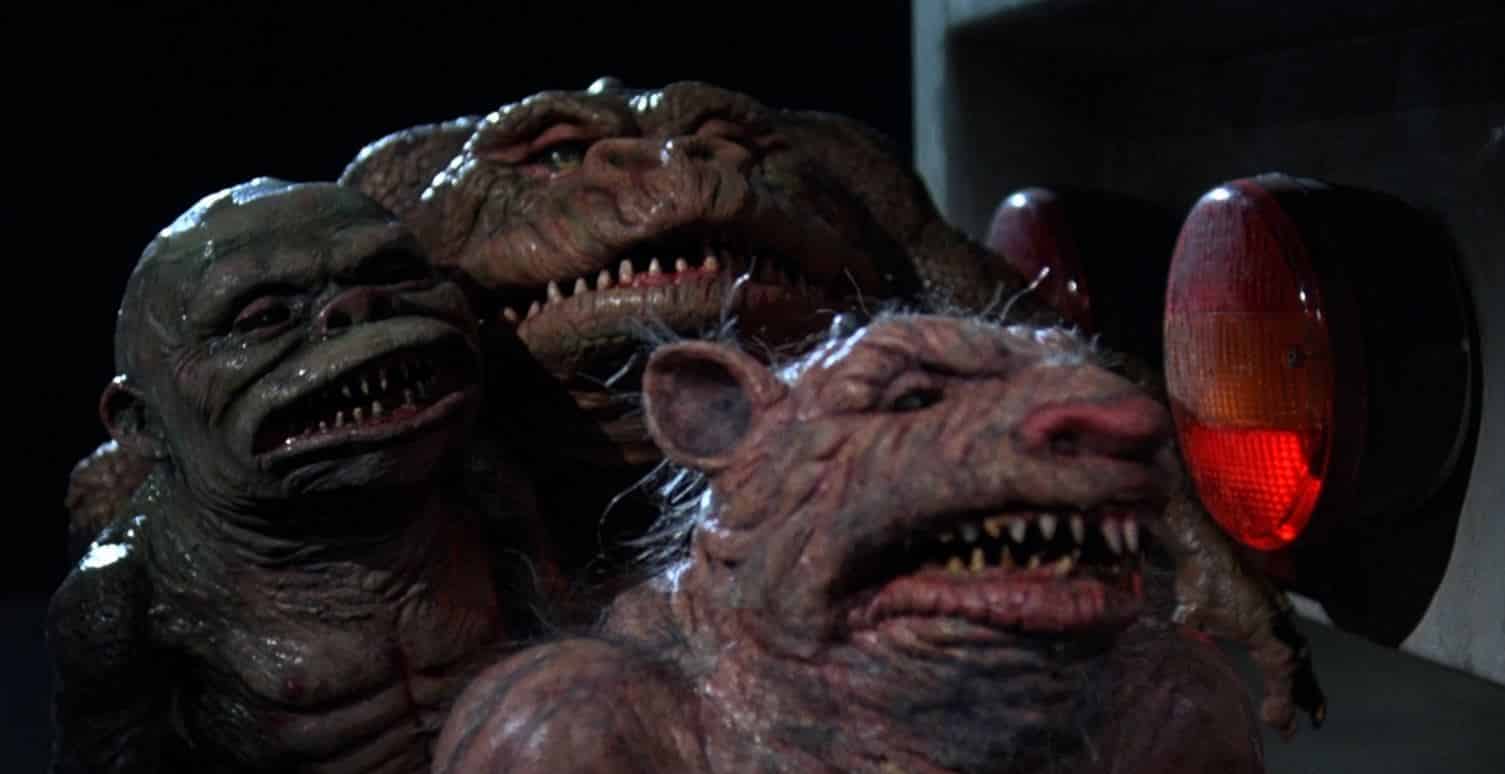 This is perhaps the most popular franchise on the list, as the first film was produced during the success of 1984’s Gremlins and had such a successful box office take in 1985 that the movie was able to spawn three sequels.

The first film follows Jonathan as he inherits a house which belonged to his father, who just so happened to be a dweller in black magic. When Jonathan moves into the house with his girlfriend, they decide to throw a party, where Jonathan unwittingly summons small creatures using one of his father’s old spells and slowly succumbs to their dark magic. At one point his own father is resurrected, and the film climaxes into a battle with various sides. 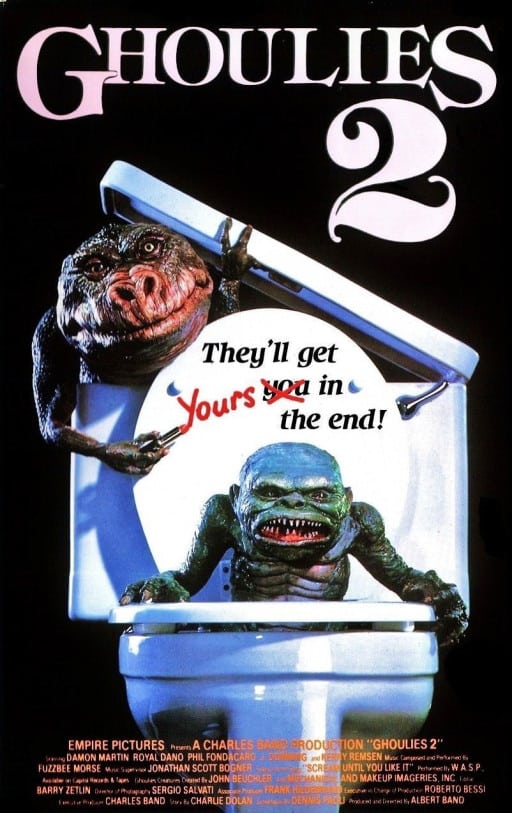 The first sequel shares no characters or settings with the first film aside from the Ghoulies which retain the same albeit slightly altered designs. The third film followed suit, however it also gave the Ghoulies individual personalities based on the Three Stooges, creating a slapstick atmosphere which blended nicely with the college setting and partying teenage characters. The fourth film did quite the opposite this time, getting rid of the iconic Ghoulie puppets in favor of dwarf actors in costumes. However, it does bring back the character of Jonathan from the first film whose now a police officer trying to deal with the forces of dark magic.

Although these movies aren’t as violent as the other films on this list, they are definitely just as out-there and creative, with unique monster designs and a concept that really would make for a great remake if the right budget and effects could be acquired.

All in all, the horror genre has such a large category of films that it’s incredible to see some of the stuff that’s been produced. There’s all sorts of monsters, villains, soundtracks, and other things that people go their entire lifetimes without witnessing. And it’s such a shame, because some of the concepts from the horror genre definitely transcend the more popular blockbusters and mainstream films of both today and the past.

There’s an endless amount of material to be experienced and analyzed, and this list just barely scratches the surface.

What’d you think? Tell us in the comment section below!