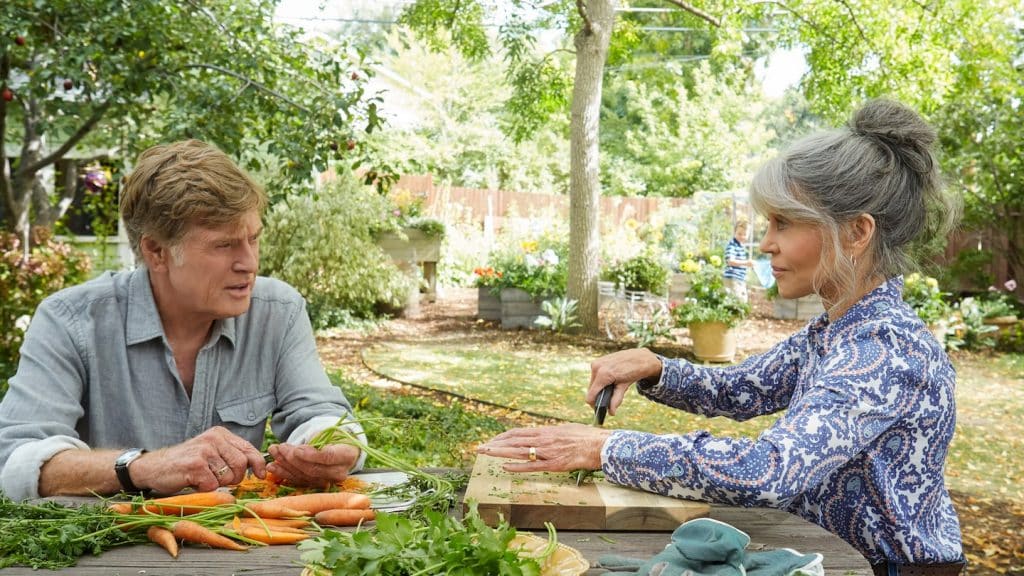 Robert Redford and Jane Fonda are two of Hollywood’s most treasured veteran actors, so the premise of the two sharing the screen together is dynamite on paper. Based on Kent Haruf’s novel, Our Souls At Night is a well-intentioned and competently-crafted flick that doesn’t dig deep enough with its interesting subject matter.

The film follows Addie and Louis, two widowers who have been spending the last few years on their own. When Addie offers to have Louis sleepover to get through the night, the two begin to form a strong bond.

Performance-wise, its hard to top a duo of Redford and Fonda. The two have a gentle, but effective chemistry, sharing the screen in almost every scene of the film. Both deliver wonderfully naturalistic and subdued performances, and their romantic chemistry has a real spark. They are able to make much of the narrative engaging even when it stutters. Iain Armitage, Matthias Schoenaerts, and Judy Greer also deliver solid work in bit parts.

Similar to The Lovers earlier this year, Our Souls at Night thankfully isn’t satisfied being a by-the-numbers film about getting older. This film thankfully has none of the cutesy cliches that make similar films feel so cloying, instead treating aging in a very realistic way. Renowned scribe Scott Neustadter (worked on The Spectacular Now and 500 Days of Summer) gets at a few weightier themes, such as parental turmoil and making amends with lifelong pains.

However, much of the film is gun-shy with truly delving into its themes. I appreciate director Ritesh Batra’s patient approach in storytelling, but much of the narrative gets sidetracked in schmaltzy detours rather than tackling the heart of this material. It all ends up feeling paper-thin, not deep enough to truly resonant emotionally.

Execution-wise, there is a lot of room for improvement. Batra’s direction relies far too heavily on a obnoxiously folksy score to carry the emotional weight of scenes, drowning out much of the subdued chemistry onscreen. Visually speaking, the movie is just flat, leaving it all to the actors and the script to carry the load. Only the former proves worthy of the challenge.

Our Souls At Night is one of this year’s many Netflix Original films, and it seems that the streaming giant is a perfect platform for the film. The film has some charm and thoughtfulness, but will likely make for a forgettable and middling detour.