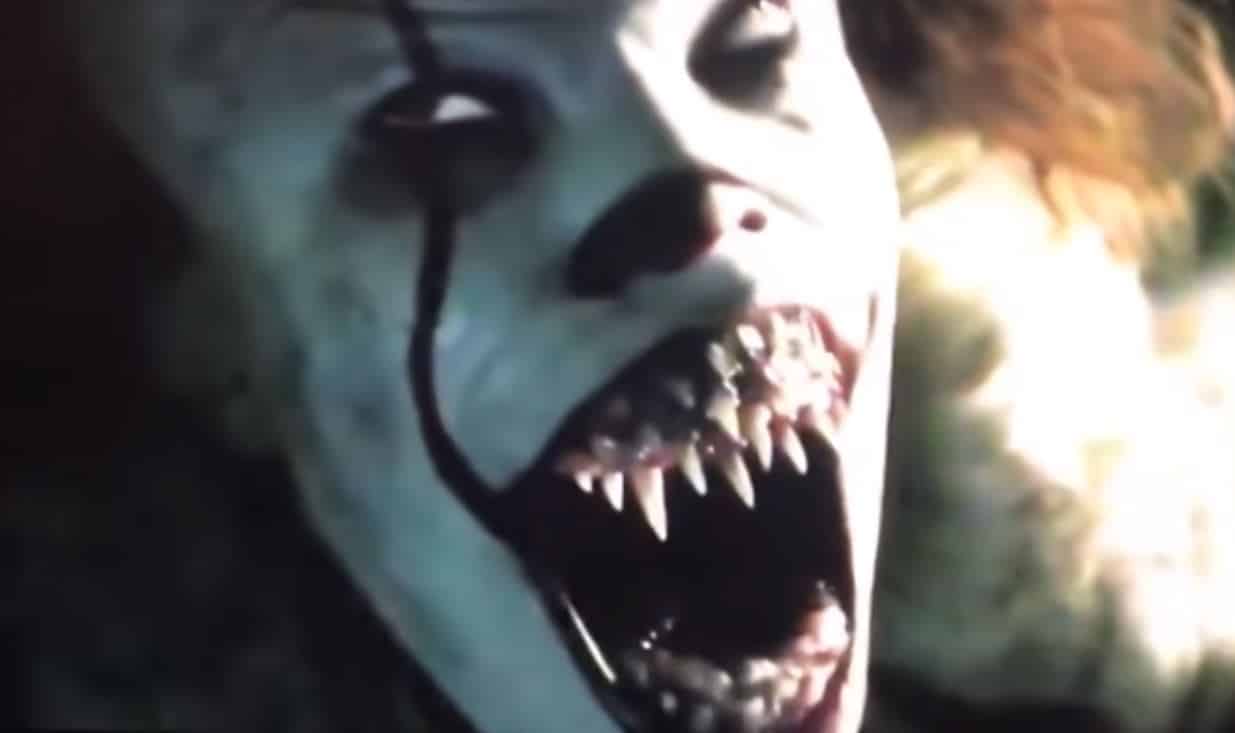 Last month, Bill Skarsgård spoke about a disturbing scene that was cut from IT which featured more backstory on Pennywise the Clown. It was set in the 1600’s and Pennywise wasn’t actually the clown yet.

Well, now that scene seems to have leaked online – via an alleged copy of the film’s script:

“1637: INT. WELLHOUSE – NIGHT ABIGAIL, 19. Rushes in and SLAMS the door. As if trying to keep Satan himself out. She clutches her BABY to her breast. Kneels by DYING EMBERS in the hearth. She blows on ‘em but a flame never catches. Her Baby starts to fuss… ABIGAIL: Hush now, shhhh… it’ll be — She stops.

Realizes that the SMALL CANDLE CHANDELIER slowly spins above her. As if some unnatural force has caused its light to rotate around the room, like tiny primitive searchlights. She hears something slithering in the gray shadows by the Well. Occasionally we catch glimpses of a BLACK SILHOUETTE. Shifting its shape. As if trying to decide on a form.

ABIGAIL (CONT’D): Please, Devil… leave us be… Shape shifts again. A beam of light passes, revealing PENNYWISE, naked, lithe, flesh pale and translucent, a half- formed imitation of a human, opens his maw full of large razor sharp teeth, dripping with saliva. As the Tin Can spins clockwise, Pennywise moves counter around the room. Each time the light hits his face — It’s different. A Man. A Woman. A Beast. A Monster.

PENNYWISE: You mistake me woman. No mere devil, I am the Eater of Worlds. His voice is guttural, unnatural. ABIGAIL: But my child, not my child… He is innocent…

PENNYWISE: So you say. The Baby SCREAMS. Pennywise smiles. PENNYWISE (CONT’D): Beautiful fear… ABIGAIL: I pray Thee, take me. Abigail shuffles back. PENNYWISE: I will. And then, him. And thy husband and the rest of thy children, and all the savages who brought you here. And when you all rot in the earth, I will pick thy bones dry until no meat is left to pick. And then I will seek out thy bones and consume thy souls until nothing is left but the weeds! (beat) Or you will occupy yourself otherwise and not interfere. I will take her and you will live, and those of thy other children — in whom I take no interest. And you will thank ME fever and frost did not damn you to the soil. Abigail looks down at her baby again.

She’s shaking, doesn’t want to let go. Behind her, the Door OPENS. A Little Boy, 6, asks — BOY: Mama? ABIGAIL: NO! OUT! NOW! Frightened by his mother, the Boy runs. Abigail turns back to Pennywise. Wherever he may be now in the room. The light somehow seems to spin faster now. She kisses her baby and sets it down. It BAWLS. ABIGAIL: I’m sorry, I’m so sorry…

She turns away from the baby. Faces those dying embers. We keep on her face as they seem to begin GLOWING BRIGHTER AS — OVER HER SHOULDER — OUT OF FOCUS — Pennywise crawls over to the Baby and starts to feast. SHARP CRY FROM THE BABY CUT OFF as we hear a CRUNCH. Abigail continues to look into the BRIGHT ORANGE GLOW of not the flickering fire… …but the DEADLIGHTS. Her expression changing. Fear. Denial. Grief. Acceptance. And then nothing. Just a glazed look. AS IF NOTHING HORRIFIC IS ACTUALLY HAPPENING BEHIND HER.”

It’s not really hard to see why the scene didn’t make the movie, although it would have definitely been one of the more disturbing scenes to ever make a film in recent memory.

It wouldn’t have compared to the graphic sexual content involving pre-teens that the film’s original director, Cary Fukanaga, wanted to include in the movie, though.