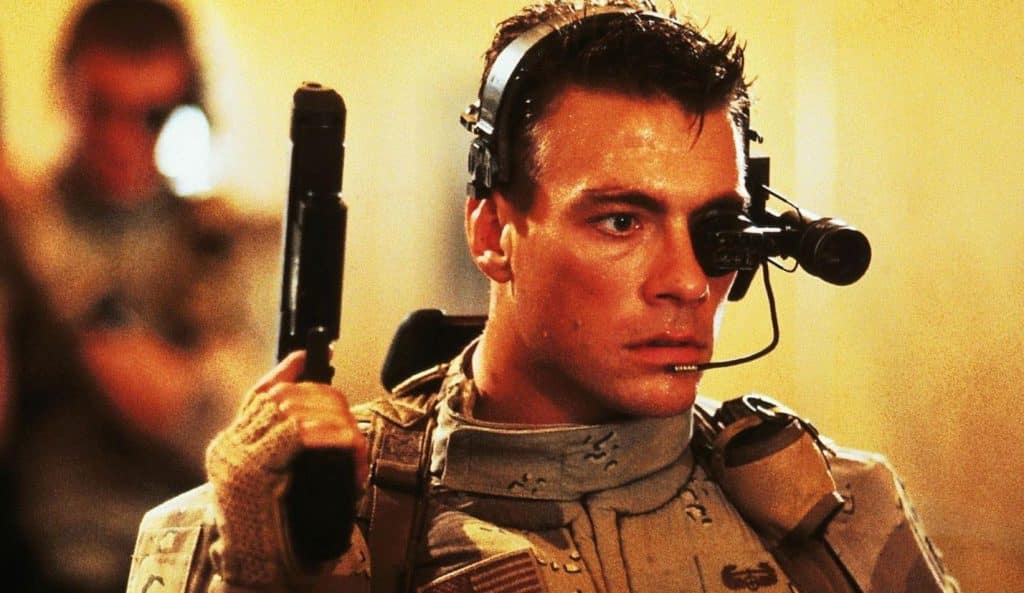 Movies of the same ilk as Universal Soldier have a tendency to press an indelible mark into the fabric of your soul, never fully managing to erase themselves from your memories and consciousness. A lot of the time, you won’t even realize whilst you’re watching them that they’re in the process of doing this. Instead, it’s many many years (and a couple of kids) down the line that you suddenly recall a classic line of Jean-Claude Van Damme dialogue, or a particularly evocative piece of imagery. Such as a scientist being killed with a massive robotic syringe to the back of his head, for example.

And at that wonderful point of sudden recall, all of the other average and mediocre offerings in the genre that have come and gone since, the ones that are rated a lot higher on IMDb and considered ‘trendy’ to talk and blog about, well they don’t matter anymore. Because you’re going to spend the next week obsessing about how you felt the first time you watched the movie that you’re remembering.

Movies like Universal Solider are usually ones that were either critical or commercial failures. That’s why people don’t write about them anymore, and they’ve dropped sharply off the cinematic landscape. But they’re every bit as good now, as they were then. Often more deserving of a remake than the continual conveyer-belt of dross that Hollywood manages to unearth to reboot or retcon.

When was the last time you watched Universal Soldier? Late night TV, maybe? And how much do you actually remember about it? I’ll bet as you’re reading this, you’re starting to realize that you remember more than you think you did. That rope assault down the side of the enormous desert dam? The very memorable ways in which the lab-coated scientists are murdered? The final answer to the great debate as to what would happen if Dolph Lundgren picked a fight with a combine harvester? 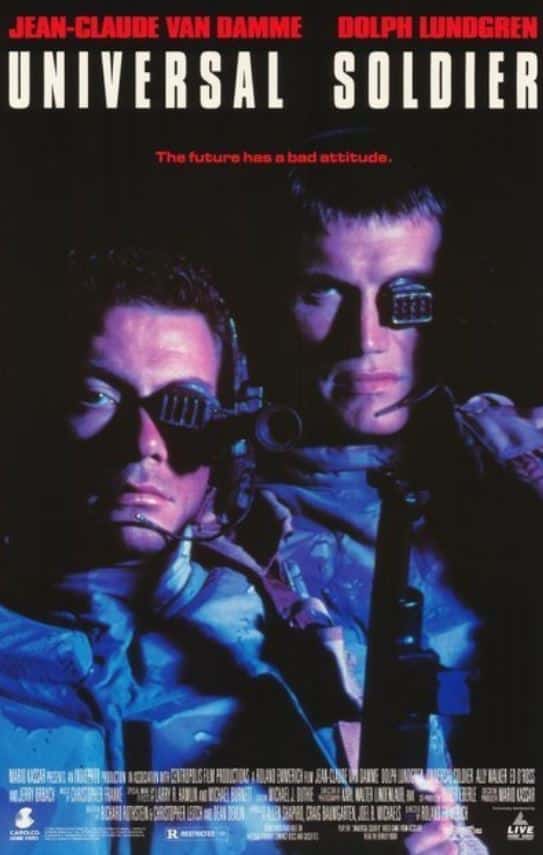 It’s a movie that couldn’t be any more 90’s if it tried. The daytime scenes are shot through a bright orange filter, the nighttime scenes through an equivalent dark blue one. It’s a noisy collage of bronzed, rippling muscle and echoingly loud gun-play, counterbalanced against a minimal script and poor acting talent. But, you know what? It’s not a dumb movie in the slightest. It’s actually one of the most Important action flicks of all time. And I’ll tell you for why…

It’s was the first significant Hollywood movie project to be directed by disaster-supremo Roland Emmerich, and the first to be scripted by his longtime collaborator Dean Devlin. A totally original idea and concept, ‘Universal Soldier’ acted as a springboard for the pair go on and create two other original ideas. Stargate, and then Independence Day. Would the Sci Fi genre be as popular as it is today without those? I think not. And just to add to the overwhelmingly 90’s feel to the film it was produced by Mario Kassar, who also produced ‘Terminator 2’ and ‘Cliffhanger’. Now, that’s some pedigree…

Alas. The success and legacies that those future movies would acquire did not lie in wait for ‘Universal Soldier’ and it was Kassar’s work on the Terminator franchise that was partly to blame. Although the movie made $36m back from a $23m budget, it was written off by critics as a cheap knock-off of the Terminator franchise. Hardly surprising given the global success that ‘Judgement Day’ had enjoyed only 12 months before. So, away it went, consigned to Jean Claude Vam Damme’s colorful back catalogue.

But, you know what? History is f*cking wrong. Universal Soldier is more than just an action movie. Underneath the poor script and the colorful set-pieces, the story is layered with the tropes and searching questions the like of which make for bloody good science-fiction. It’s a story that gets lost under the limited special effects of the day, and the smothering/ridiculous masculinity of both Van Damme and Lundgren. And you only have to look no further than what happened next with the movie to prove just how good it was.

Because once it was out there, the film industry just couldn’t leave it alone. And it would go on to spawn no less than THREE separate timelines, long before Barry Allen and DC Comics made that kind of thing popular. The late 90’s would see two TV movies produced, which immediately followed on from the events shown in the original movie.

Matt Bataglia would step in as the new Luc Deveraux, in a storyline that would see his dead brother, Eric, bought back by the government nasties to use against him. It would also see Burt Reynolds bought in as a villain. Which kind of explains why the new series of movies didn’t ultimately go on to work out.

With that alternate reality for the franchise dead and buried, Van Damme returned in 1999 as the original Deveraux, for a new movie sequel, Universal Soldier: The Return. That was a film that all involved in went on to wish had never happened. The movie was as camp as Christmas, festooned with WWE wrestlers and ridiculously large firearms, and an evil CPU as the bad guy.

Once again, this different direction for the franchise was cut short, only to be rebooted with a third new timeline recently, using MMA fighters and Eastern Europe to continue the original storyline.

Why can’t Hollywood leave Universal Soldier alone? Particularly when they treated it like shit at the time? Because at the heart of the concept is an epic tale about the loss and redemption of humanity, an idea that has never gone out of fashion in good movie making. It retains core themes that remain relevant today, from corrupt government and private security firms, to how we treat our soldiers in the aftermath of warfare, and the unregulated development of science.

Sure, it’s all well hidden. I mean, acting has never been one of Van Damme’s strongest points, which is why he performs so particularly well in this role. Portraying an emotionless, utterly confused robot/man is one of the best things he’s ever done. And in recent times he’s started to enjoy something of a renaissance by parodying these roles, and actually revisiting them, examining his performances and laying his flaws bare for all to see. Which is all very deep, and sometimes a little uncomfortable to watch.

Quite simply. Universal Soldier was a movie that was well ahead of its time, and as a result it struggled to make any kind of impact with the way in which it was presented. But history has been kind to it, kinder than you think. This is a deep and serious Sci Fi story, wrapped in a spurious and silly kickboxing movie. Oh, and Jerry Orbach makes an appearance too. I bet you’d forgotten that.

Hopefully having read this, you now have a burning desire to dig out that old VHS, blow the dust off it, and then remember you don’t own a VHS player anymore. Because life is cruel…

Are you a fan of Universal Soldier? Be sure to tell us your thoughts on the film in the comments!