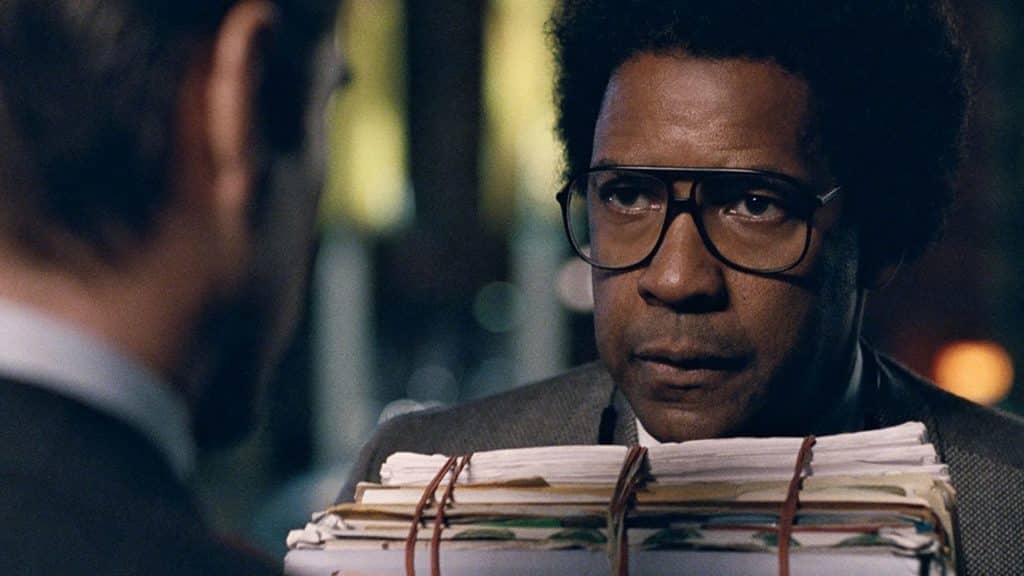 Denzel Washington is a great actor, and I while I was highly disappointed by his last outing Fences, there are few in the industry who can equal his talent. With his latest film Roman J. Israel, Esq., Washington delivers a memorable performance, one that carries its intriguing, yet often times frustrating narrative.

Named after the film’s titular character, Roman J. Israel, Esq. follows a smart and idealistic law assistant whose beliefs are put to the test when his practice is being closed down.

Like a great athlete, Washington straps this film on his back, carrying it through some of its execution errors. As Roman Israel, Washington is issued the tough task of bringing to life an eccentric character while maintaining a sense of humanity. Thankfully, he pulls it off in spades, capturing Israel’s amusing idiosyncrasies while still portraying him as a dedicated lawyer who takes his civil service role with the upmost seriousness. Once the character begins to change, Washington captures his inner-demons with emotional sincerity without overplaying it.

As a part character-study and part law drama, I credit Nightcrawler director Dan Gilroy for his assured direction. With both of his first films, Gilroy has proven himself as a skilled auteur, capturing the Los Angeles underbelly with an equal level artistry and personality. Working with Oscar-winning cinematographer Robert Elswit, the duo craft some visually profound moments. I personally love the way they are able to capture the inner-anxieties of Israel as he navigates through his dire situation. Gilroy stays one step ahead of the audience, with this two-hour plus film keeping me engaged throughout.

Gilroy’s screenplay is far from perfect, but I give his effort a lot of credit for its thoughtfulness. This film is an interesting dissection of humanity and the corruption of morales, as we find Israel beginning to doubt his mission as heartache continues to pile up on him. Can we keep our idealism forever or will circumstance and survival change them? These ideas are well-articulated through Israel’s character.

While Gilroy’s script accomplishes that goal, his narrative is a flat-out mess. News broke a few months back that Gilroy and company edited out 15 minutes from the TIFF cut, but I don’t think that was a good call. There are moments here where the narrative jumps around and it lacks flow from moment to moment. Certain events and character progressions happen suddenly, needing a scene or two to establish proper motivation. The story fails to be as compelling as its protagonist, ultimately turning into a generic thriller before its stagnant finale.

Roman J. Israel, Esq. fails to develop the characters surrounding our protagonist. Colin Farrell is stuck in one of the most underutilized roles of the year as he plays Israel’s boss, a character who lacks both personality and purpose. Carmen Ejogo on the other hand is quite good and has some strong sparks with Washington, but her character ends up feeling like an excuse to further develop Israel’s internal struggle.