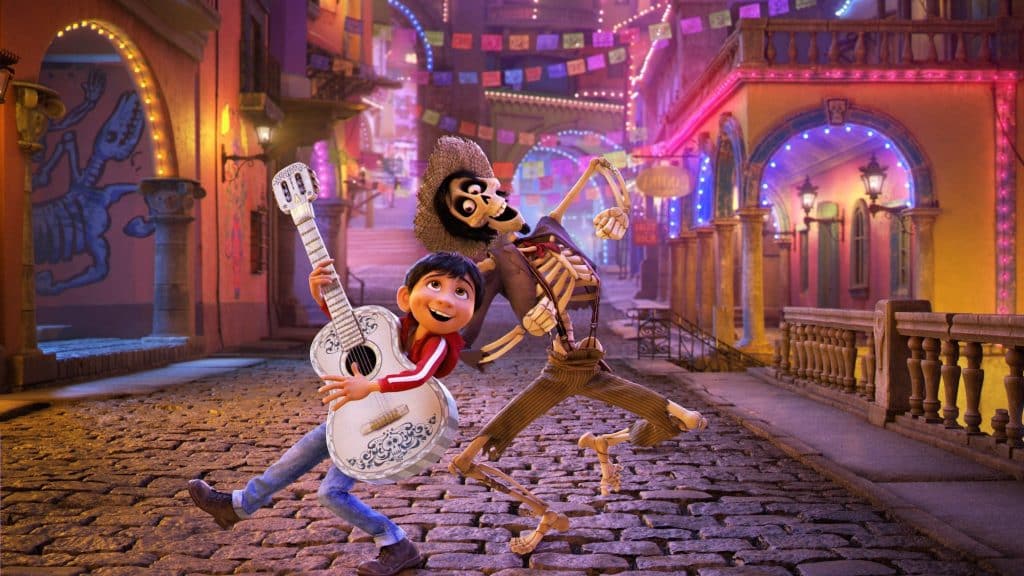 Pixar has crafted some of the greatest animated films ever, but some would say they have lost their creative spark since Toy Story 3 in 2010. While their latest animated effort Coco isn’t exactly a return to form for the animation giant, its a surprisingly resonant and impeccably crafted flick that sidesteps its narrative troubles.

Coco follows Miguel, an inspiring musician who has grown up in a family that has outlawed music. When he tries to re-connect with his ancestor on the Day of the Dead, he enters the Land of the Dead, where he must learn where his true values lie.

Like with every Pixar film, Coco is truly a feast for the eye. Every year the studio continues to one up themselves, with their grand animation staff continuing to craft worlds with vibrancy and detail. Directors Lee Unkrich and Adrian Molina deserves praise for using this beautiful landscape as a canvas for some fun inventive moments, especially some of the film’s more comedic set pieces.

Credit to the film’s talented writing staff for embracing its Mexican-inspired culture rather than using it as a simple motif. Miguel’s family and their deeply-rooted traditions are soulfully captured, and I appreciate that this film spends a proper amount of screen time to give this family some textured details. A lot of animated films try to send family-centric messages to its audience, but Coco is one of the few to truly understand and capture its family dynamics with heart. The film’s talented voice cast also deserves a lot of credit, as Anthony Gonzales, Gael Garcia Bernal, Alanna Ubach, and Benjamin Bratt add a lot of energy and personality into their roles.

What makes Coco stand out compared to Pixar’s more recent efforts is its large heart. The second half especially sneaks up on its audience, with the film addressing aspects of family, memory, and death with some surprisingly small and sincere moments. The music here is used to enhance these moments, with the use of “Remember Me” likely draw to some tears from audiences (I won’t lie, it got me).

This film still struggles from some of the script problems that have plagued other Pixar flicks. I give the writing team credit for some well-done narrative twists, but the story for the most part hits the typical beats that you would expect. It’s a shame in particular that this film feels the need to add more conflict than there really needs to be, as it shoe-horns in the typical chase scene that all animated films have today. For me at least, the film’s second half is more effective than the first, as it takes some patience before the film begins to explore its more interesting thematic concepts. While I don’t take points against the film for this, the 20 minute Frozen short before the film is painful, and I recommend older audiences just show up late to skip it.

Coco is a winning effort from Pixar, one that creates a beautifully vibrant world matched with a soulful tale of family and life itself. It’s nice to see Pixar getting back on track, because few studios can connect with such a wide array of audiences when on their A-game.

Continue Reading
You may also like...
Related Topics:Animation, Coco, Pixar