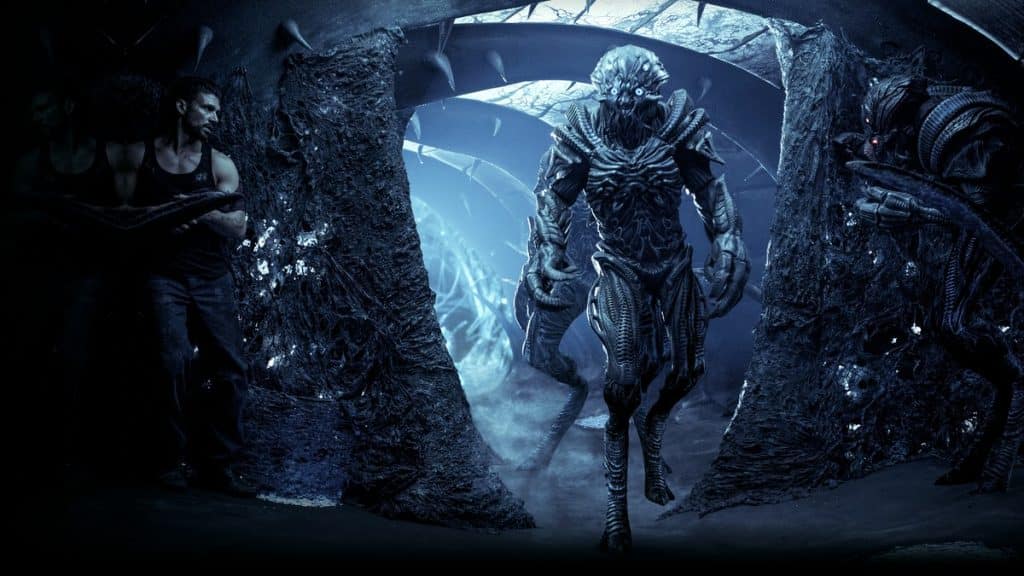 I can’t tell what is more surprising, the fact that the horrid low-budget science fiction film Skyline got a sequel or the fact that this sequel, entitled Beyond Skyline, is actually pretty decent. Snarky comments aside, this is an impressive improvement over its predecessor, with the team behind this taking notes from critics and audiences.

Beyond Skyline follows Mark, a disgruntled police officer who, along with his son, is placed in an alien warship and must fight their way out.

Producer and co-writer of Skyline Liam O’Donnell is the primary writer and director for this sequel. O’Donnell here shows his understanding of genre films, crafting a film that feels like its from a different era. For me at least, that is a positive, as I enjoyed this film’s 80’s-inspired roots.

O’Donnell and his team deserve a lot of credit for milking the most out of their small budget. The visuals aren’t perfect, but O’Donnell does a lot of great camerawork to hide their imperfections, and I think there’s an earnest charm to the film’s ability to maximize its budget.

It also helps that Beyond Skyline has a far better cast than the original. Between this and The Wheelman, Frank Grillo is starting to become the king of turning middling material into a good performance. He is always believable as an action star and everyman due to his great presence. Bojana Novakovic, Johnny Weston, and Iko Uwais (star of The Raid) all do solid work in their respective roles.

This is a film that very much embodies the “throw everything at the screen” theory, and does so with a lot of fun results. Between kung-fu combat with aliens or brains getting ripped out of people’s heads, there’s a lot of audacious moments that are undeniably fun to watch. Even through the film’s faults, I could never deny that I was entertained throughout.

I give O’Donnell a lot of credit for making the visuals work, but I think the action scenes could have been improved. The camera work apes many modern actioners with the so-called “shaky cam”, and while it works at parts, it can also be disorienting to watch. Some sequences aren’t nearly as enjoyable because its hard to tell what is exactly going on.

Like a lot of genre films, the script could use some work. O’Donnell effort at building up the Skyline universe is admirable, but the dialogue here is fairly bad. Aside from a few fun zingers, much of the attempts at humor swing and miss. The characters are formulaic and lack personality.

Beyond Skyline is an impressive improvement over its predecessor, with its new cast and director invigorating this brand with a genuine fun factor.