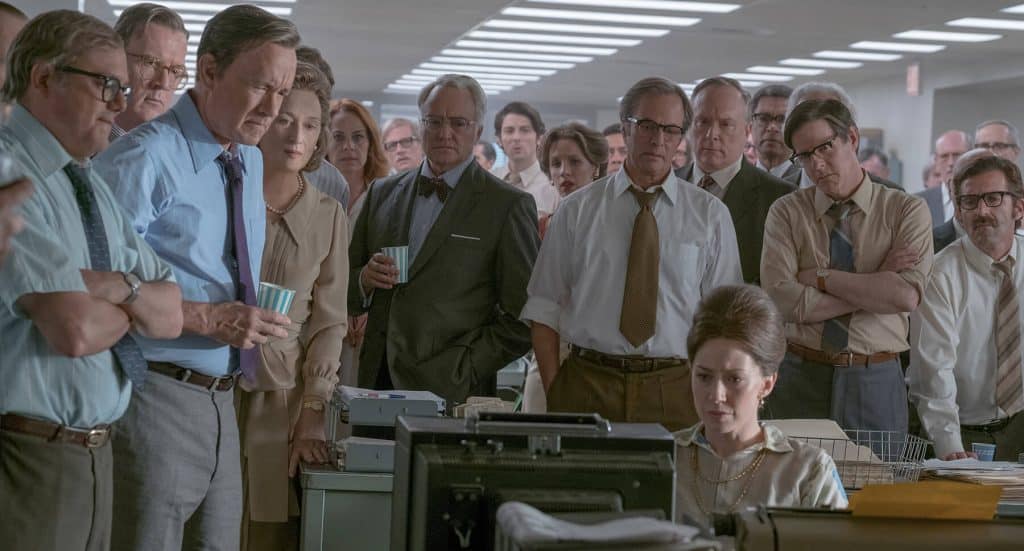 Combining the likes of Steven Spielberg, Meryl Streep, and Tom Hanks (that’s over 30 combined Oscar nominations), expectations were high for The Post to be a significant and relevant tale. Sadly, its aims to crowd-please over capturing the nuance of the subject matter.

The Post follows the true story of The Washington Post and its owner Kay Graham, who has to fight against the government and gender politics in order to reveal a shocking government conspiracy about the Vietnam War.

The Post has been praised throughout Oscar season for its relevance, but the film fails to capture that relevance in a dramatically significant way. It’s a flashy film, one that will surely please audiences, but its flashiness is overdone at every turn.

Performance-wise, everyone in the A-list cast holds their own. Meryl Streep gives one of her better performances in recent memory as Kay Graham, showing her self-doubt and fortitude with poise. It certainly helps that the cast is full of great actors, with Tom Hanks, Bob Odenkirk, Tracy Letts, and many more acclaimed actors (this cast list is ridiculous).

The problem is that the film largely wastes most of these actors time due to its overreaching scope. Liz Hannah and Josh Singer try to capture as much of this story as possible, but considering there is three different main arcs, everything ends up competing with one another. The finally product ultimately feels half-baked because of it, as I am sure this could have worked better as a mini-series.

What kills this film for me is shockingly enough Spielberg’s direction. I admire when a director tries to bring some visual sparks to ordinary material, but between the zany camera movements and laughably grand score, it becomes overkill rather quickly. This is most apparent in the film’s finale, as the audience is repeatedly hit over the head with obvious visual cues and pandering speeches. It becomes an obnoxious experience, with the film needing to spoon feed the audience every detail.

The Post has the material for a great movie, but its pandering execution drowns out any nuance or genuine moments. I am not surprised one bit this is a Best Picture nominee, as its the kind of trite Oscar bait that outdated voters typically drool over.