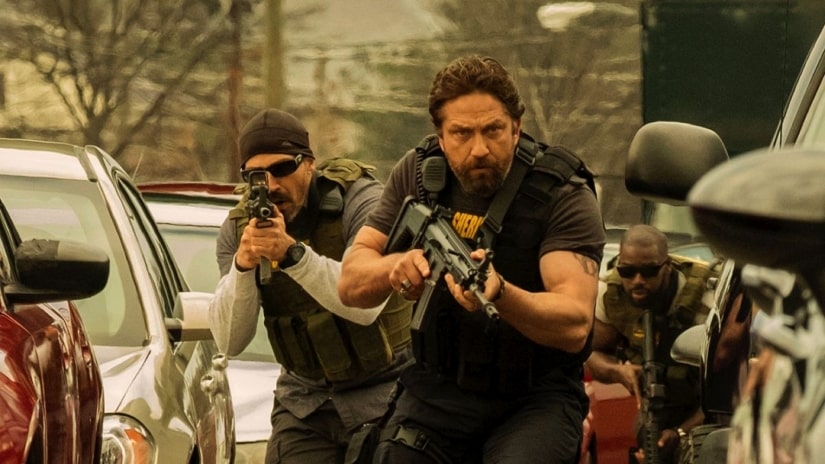 Like a Michael Mann film shot in the arm with goofy machismo energy, Den of Thieves is certainly a film that will have a love it or hate it reaction. With its taut energy and game cast, I had a lot of fun with the film, as it proved itself to be far and away one of the better January films to hit theaters.

Den of Thieves boils down to your basic cops vs robbers story, except these cops (led by Gerald Butler) are as corrupt as they come. When a heist team plans on hitting the Federal Reserve, in all out war rages between the two sides.

Director and writer Christian Gudgegast wears his Heat inspirations on his sleeve, with much of the narrative hitting the typical heist film beats. That’s not a bad quality necessarily, especially when he imbues a lot of fun into the film. Den of Thieves is honestly funnier than most comedies, with its surprising self-awareness focusing on many badass action cliches. There are goofy scenes in here that would be found on the cutting room floor for most films, but their presence here is a fun surprise.

The film is at its best when the action isn’t happening, as Gudgegast spins a tight narrative full of interesting twists. Considering its two-hour plus running time, Gudgegast does a good job of keeping the story moving at a solid pace, as the film builds up nicely to its final conclusion. More importantly, he lets his actors shine with sharp dialogue. Gerald Butler frankly has been fairly irrelevant the past few years, but he comes to alive in a wonderfully over-the-top performance here. Between his drunk rants and crass one-liners, Butler is a blast to watch, bringing a machismo flair. Pablo Schreiber, O’Shea Jackson, and 50 Cent himself also do solid work.

This is Gudgegast’s first film, and that shows at times. The action scenes in here are surprisingly tame, lacking much in terms of style or bloodshed. It’s particularly a shame because the whole film builds to its final climax, ending with more of a whimper than a bang. The film also doesn’t know what to do with its characters, with none of them before remotely likable or interesting. Striving for a film with their is bad guys on both sides is cool in concept, but the characters are too thin to draw much interest.

Den of Thieves is rugged and rough around the edges, yet its never comprised of a dull moment. It’s a blast to watch from start to finish, and I hope this film’s success leads to some more goofy heist films like this.

Continue Reading
You may also like...
Related Topics:Den of Thieves, Gerald Butler