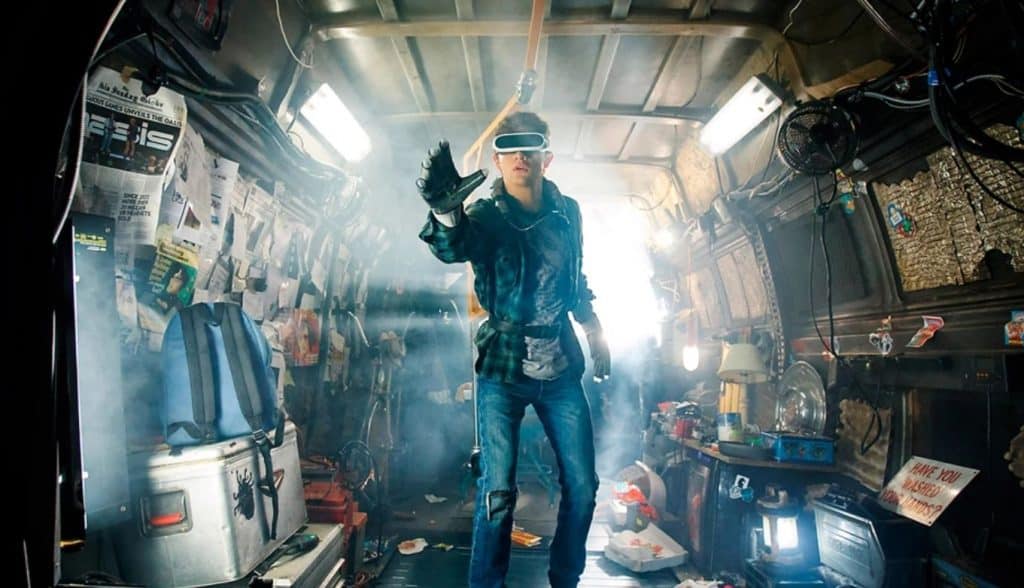 I’m going to start this review with a bit of a confession – I’ve never read Ernest Cline’s Ready Player One, the film that Steven Spielberg’s latest adaption is based on. That being said, it didn’t stop me from enjoying every moment of this film. So strap on those VR goggles, turn on that multi-directional treadmill and step into the OASIS.

The plot of Ready Player One follows the heroically named, Wade Watts (Tye Sheridan) as he and his friends navigate their way through the virtual reality world known as the OASIS (Ontologically Anthropocentric Sensory Immersive Simulation) on the hunt for the Easter Egg hidden by the world’s creator, James Halliday (Mark Rylance) which grants the finder sole control. Unfortunately he finds himself up against a sinister tech company led by Nolan Serrento (Ben Mendelssohn) who will stop at nothing to win the prize which eventually brings the entire OASIS into a war for its future.

Much like the book that it’s based on, the film features cameos and references to many different icons of pop culture, but whereas the novel primarily featured references to 80’s culture, the big screen version opts to use more current characters. This leads to cameos from characters such as Tracer from Overwatch, the Spartans from Halo, Chucky from Child’s Play, the lovable Iron Giant and more than a fair share of DC Comics characters. A reference to one particular spacecraft I never expected to see on the screen again certainly brought a smile to my face – but I won’t spoil it.

The action scenes are particularly spectacular with the race scene which features heavily in the trailer being a true feast for the eyes as all manner of vehicles race through the streets of New York, narrowly avoiding rampaging Dinosaurs and giant Apes. One aspect what really worked in the movies favor is the video game influences, which mean that the production can get away with characters looking slightly cartoony and it still fits the style. But that’s not to say the effects look bad, on the contrary, they are some of the more impressive films of recent times.

Despite the cast portraying CGI avatars for most of the film, they still manage act in an engaging and realistic manor. Tye Sheridan does a great job as both Wade and his digital alterego Parzival, managing to balance both awkward and heroic over the course of the film. Similarly Olivia Cooke does an impressive job as the badass gamer Samantha, otherwise known as Art3mis. One of the standout performances has to be Mark Rylance, a recent Spielberg mainstay, as the socially awkward creator of the OASIS a man whose regrets in life are what leads him to creating the challenge our heroes undertake.

On the opposite side of the fight is Ben Mendelssohn’s underhanded CEO Nolan Sorrento. Mendelssohn seems to be having an enjoyable time channeling his Director Krennic from Rogue One whilst adding a slight element of campiness to his portrayal in a manner similar to Gene Hackman’s Lex Luther.

All in all, Ready Player One feels like Spielberg doing what he does best – a classic tale of adventure which pits a ragtag bunch of heroes against the forces of evil. It also shows why Spielberg is one of the hardest working directors in Hollywood today, able to put out Oscar contenders such as The Post or big budget summer blockbusters such as this one. Here’s hoping that Ready Player One becomes the hit it deserves be.