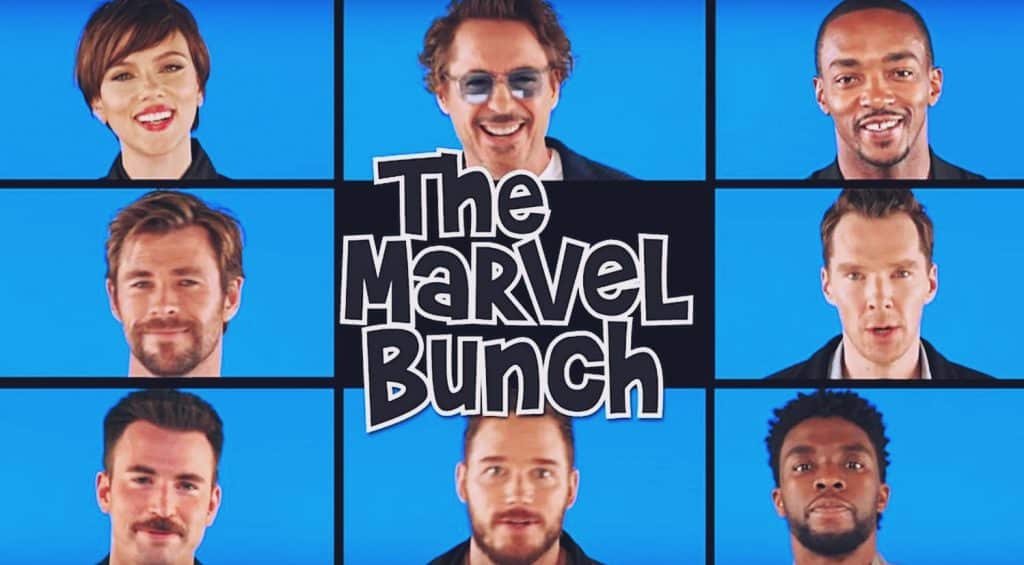 What is better than seeing all our favorite Marvel characters on the big screen taking on the mad titan Thanos in Avengers: Infinity War? Watching those same Marvel characters get together to make a parody of an old popular television show theme song. The heroes not only did a parody, they sang their hearts out explaining how they became The Marvel Bunch.

On the Tonight Show starring Jimmy Fallon, the tight nit family like cast, got together to sing their paths of how they became the Avengers. A few, probably shouldn’t sing again but some of them seem to have a knack for it. Some of the actors really got into it, including Robert Downey Jr. who seemed to be having one heck of a time filming this little promotion of their film. Others that joined him were, Scarlett Johansson, Chris Hemsworth, Chris Evans (mustache included), Chris Pratt, Anthony Mackie, Benedict Cumberbatch, and Chadwick Boseman. At the very end of the clip we also get to see a brotherly argument when Tom Hiddleston pops up and says hello to his “brother”, where he is returned with a “Shut up”.

Jimmy Fallon was the mastermind behind this parody (of course) and he is no stranger to tooting his own horn. He took to his twitter to tell his fans that this crossover was even greater than what you will see in Infinity War. The Brady.. I mean Marvel bunch, has people all over laughing which is a good thing to have when you are expecting to see a huge amount of death and emotional pain during the film. At least this is something that MCU fans can hold onto while they suffer the emotional torture of waiting until Avengers 4 untitled hits the big screen next year and clears up any left-over questions that the Russo brothers have left for us.

.@Avengers meet the Brady Bunch for an even bigger crossover:https://t.co/o89OG5xZo5 #FallonTonight #AvengersInfinityWars #Marvel

Did you enjoy the Parody? Would you have gone with a different television show? If so, which one? Be sure to let us know in the comments below!