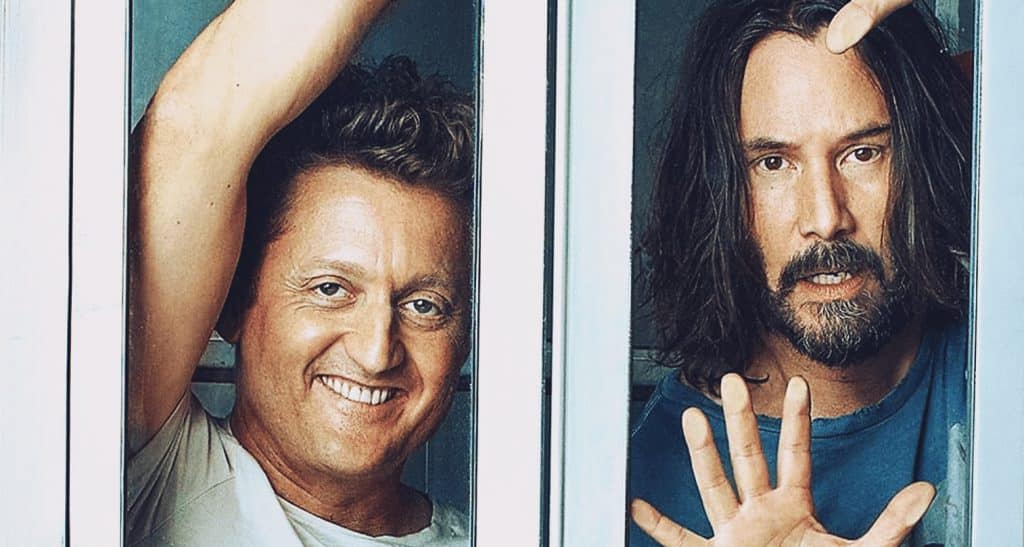 With nearly three decades worth of a hiatus, Bill & Ted 3 is finally going to happen and our iconic duo is officially ready to come back, according to Deadline.

Keanu Reeves and Alex Winter are set to reprise the roles of Ted “Theodore” Logan and Bill S. Preston Esq. respectively for the sequel, titled Bill & Ted Face the Music. Returning on hand will be the original creators Chris Matheson and Ed Solomon. Galaxy Quest and Red 2’s Dean Parisot is set for directing duties and Limitless producer Scott Kroopf to produce alongside Alex Lebovici and Steve Ponce of the Hammerstone Studios banner.

Earlier this year, William Sadler even expressed interest in returning as Death from the last film:

Have scythe, will travel.

“We couldn’t be more excited to get the whole band back together again. Chris and Ed wrote an amazing script, and with Dean at the helm we’ve got a dream team!”

The official synopsis is as follows:

“When we last met Bill and Ted they were time-traveling teenagers trying to pass history class and win the battle of the bands. Once prophesized to save the universe with their rock and roll, middle age and the responsibilities of family have caught up with these two best friends who have not yet fulfilled their destiny. They’ve written thousands of tunes, but they have yet to write a good one, much less the greatest song ever written. With the fabric of time and space tearing around them, a visitor from the future warns our heroes that only their song can save life as we know it. Out of luck and fresh out of inspiration, Bill and Ted set out on a time travel adventure to seek the song that will set their world right and bring harmony in the universe as we know it. Together with the aid of their daughters, a new crop of historical figures, and some sympathetic music legends, Bill and Ted find much, much more than just a song. The film is currently in pre-production.”

This news, for lack of better words, is most excellent.

What do you think of the news? Are you excited for Bill & Ted 3? Be sure to tell us all of your thoughts in the comments!