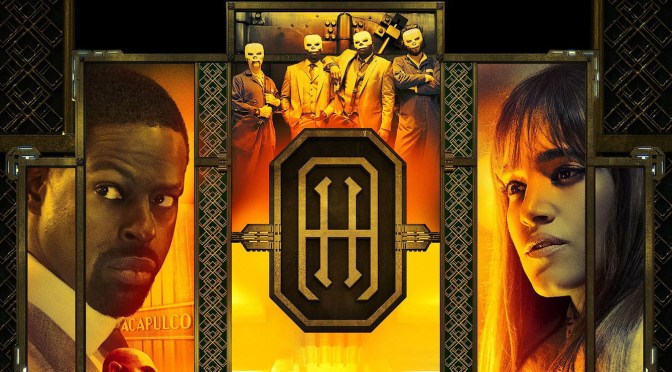 Genre movies are a rarity in mainstream cinema, let alone genre films that are low to mid-budgeted. After being treated to the fantastic Upgrade a few weeks back, we now have Hotel Artemis, a film that, while it packs numerous interesting ideas, never really comes together as it should.

Set in a not-so-distant dystopian Los Angeles where riots and crime are constant, Hotel Artemis follows an ensemble of thieves and murders who stay at Hotel Artemis, a hotel ran by “The Nurse” (Jodie Foster) for bad guys in trouble. When the rules of the Artemis begin to be broken, chaos ensues as the residents turn on one another.

More so than most genre movies, Hotel Artemis does earn some brownie points for its thoughtfulness. Iron Man 3 scribe Drew Pearce fleshes out his dystopian world with a lot of relevant social issues, as he slyly touches on gun violence among other issues (reference to flying “south of the wall”). Pearce’s dialogue for the most part is quite sharp, effectively world-building while still offering a lot of personality.

Performance-wise, everyone does a relatively solid job. Foster and Dave Bautista are the standouts as ‘The Nurse” and her loyal assistant, sharing a believable and surprisingly sweet chemistry. It’s particularly fun to get to see Foster in such a different role, embodying the persona of an anxiety-ridden woman who is continually held back by her past. Sterling K. Brown, Sofia Boutella, and Charlie Day are also quite good, rounding out this ensemble with sparks of confidence and personality.

Hotel Artemis sadly never is able to move past mildly intriguing though. I credit Pearce for trying and to develop these characters, especially “The Nurse”, but all of that development falls incredibly flat. Flashbacks interspersed throughout are too melodramatic to make a genuine impact. Pearce’s script also tries to do way too much, with a subplot involving a cop played by Jenny Slate in particular being completely superfluous.

While Pearce shows some strengths as a writer, his first effort as a director is less than stellar. There are some neat ideas for action setpieces, including getting to see Dave Bautista fight a horde of mobsters, the clumsy execution leaves a lot to be desired. The camera work is never steady enough to even see what’s going on, letting alone enjoy it.

Hotel Artemis has some admirable ambitions, but it never is as fun or impactful as it should be. The film ends up just being a middling mixed bag, but I do hope to see more films like this in mainstream cinemas.

Continue Reading
You may also like...
Related Topics:Hotel Artemis

‘Hereditary’ Review: Highbrow Horror Can’t Quite Live Up To The Hype
‘The Incredibles 2’ Review: The Sequel You’ve Been Waiting For
Advertisement
To Top