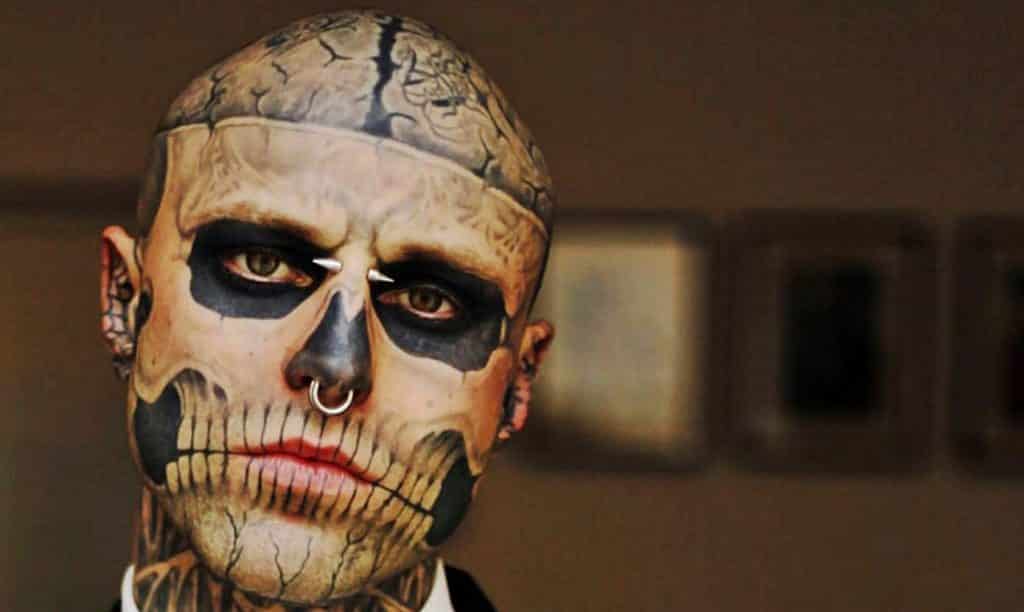 Rick Genest, a model also known as ‘Zombie Boy’ has been found dead at his home in Montreal, Canada. The model was 32 years old and sources say that it was an apparent suicide – but his family believes the death was accidental. Many people have shared messages of sadness and condolences, including his management and star Lady Gaga who had Genest appear in her Born This Way music video.

Rick Genest was known widely for this body art. He was covered head-to-toe in tattoos to look like organs and bones, and his unique body art landed him work following years spent living on the streets on Montreal. He started appearing in “freak shows” and was eventually discovered by stylist Nicola Formichetti. This lead to Genest being featured in a Thierry Mugler campaign and a Lady Gaga music video. This lead to more high profile modelling work for magazines and runway shows.

The model, who also landed some small movie roles, held a Guinness World Record for most bones tattooed on a human body – 138. He has a waxwork displayed in his hometown and a museum in London, England is scheduled to showcase a bronze statue of Zombie Boy next year.

iHeartRadio have shared that Rick Genest had surgery to treat a brain tumour when he was young, and suffered with mental health issues ever since, according to his friends.

In an interview with Wonderland, Rick Genest explained the meaning behind his body art. He said:

“The zombie concept is also often used as a metaphor for runaway consumerism. Rebelling from this notion is the very meaning of punk. The origins of the zombie creature came about from stories of people being buried alive in times of plagues and such crises; that would come out the other side transformed. Zombies, to many, represent a pervasive xenophobia. As in my life, I was often out-casted, hated or misunderstood.”

The art we made was sacred to me and I was emotional, he was an incredible artist and his art and heart will live on. Rest In Peace 🙏 You beautiful soul. pic.twitter.com/0gXTJ6cHYB

Out of respect for Rick’s family, Rick & his legacy I apologize if I spoke too soon as there was no witnesses or evidence to support any conclusion for the cause of his death. I in no way meant to draw an unjust conclusion My deepest condolences to his entire family and friends. pic.twitter.com/CJ9AdOJ22j

Absolutely heartbroken. Rest in Power, Zombie Boy. Sending all my condolences and love to Rico’s family and friends. If you ever need help, reach out. 1-800-273-8255 is the number for the National Suicide Prevention Lifeline. You’re not alone pic.twitter.com/AuapCxj2FU