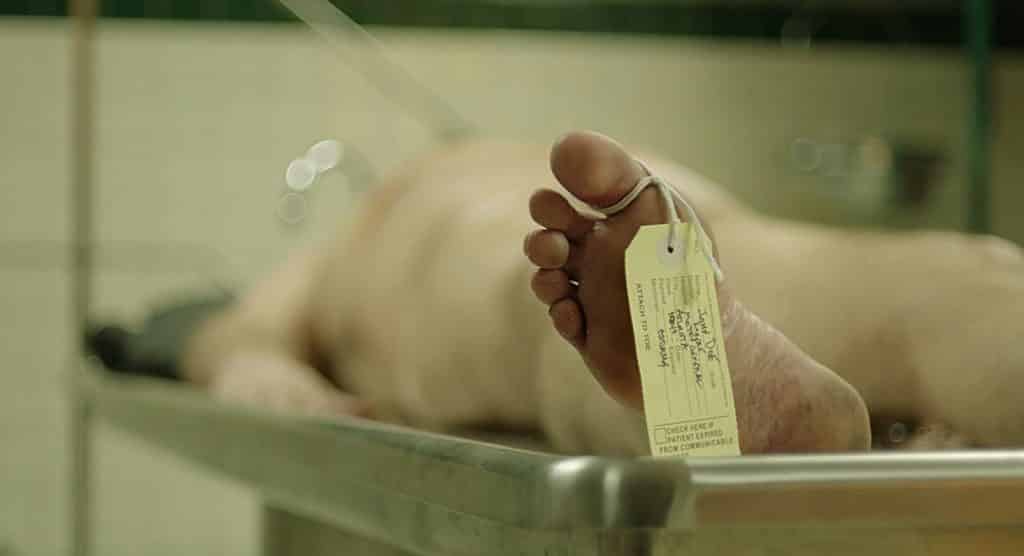 The Dead Center is part of the thriller genre, and though I generally stay away from this type of film for the huge disappointment they tend to be these days, I took a chance on this one. The summary in the “About The Film” section on the LA Film Festival website caught my attention, but it still felt like it encompassed some old thriller tropes that have been done before, and I was on the fence.

The story is about a man who wakes up in a body bag and wanders into the hospital’s psychiatric ward. No one knows his name, so he is referred to as John Doe (Jeremy Childs). He ends up in the care of a doctor (Shane Carruth) who cares more about his patients than most. His level of intrigue rises when the man claims there is a “blackness” inside of him, controlling him. While the doctor cares for the man, an investigator (Bill Feehely) looks into the disappearance of the body that came into the hospital in the body bag. Both the investigator and the doctor soon discover the truth may be darker than they could ever have dreamed.

For about the first twenty minutes, the film felt comfortable. I was getting to know the people in it and the pacing was rather slow. I became sort of complacent as I got to know these characters I’d be taking this ride with.

At some point between the first twenty minutes and the next fifteen, I realized I was in for it. I mean, really in for it. I can’t pinpoint the exact moment, but I was not comfortable any more. It’s like when someone is swimming at the beach and they only realize they’ve gone out just a little too far when they look back and see that the shore is too far for comfort, and no one is there to help them.

The film opens with a mystery, like most thrillers do. Who is this guy and why is he waking up in a body bag? Our John Doe (Jeremy Childs) wanders out of the morgue and into a random bed in the psych ward. Jeremy Childs’s performance is solid in this film, as he seems to go from catatonic to violently evil with ease. It is his performance the film uses as a weapon to wear down the audience’s defenses. He’s mostly harmless, until you realize he isn’t, but you still hold out hope that the humanity in him will persevere.

There is usually something good in a film like this to balance out the evil; a driving force to cause a struggle for the bad things that exist. Daniel Forrester (Shane Carruth) is a doctor who works in the psych ward and cares maybe a little too much about getting his patients the help they need. He immediately becomes invested in the wellbeing of John Doe. Shane Carruth delivers an unstable portrayal of the doctor, as only a doctor with heart should be portrayed. His shift from weakness to decisive action is nearly flawless.

The cinematography here is just about spot on. It takes some creativity to show evil the way it’s been done in this film. Without giving too much away, it’s difficult to see exactly what happens at the scariest moments, which only adds an extra layer of nervousness and fear to the atmosphere of this piece.

Another visual part of the equation comes in the form of gore. While this is in no way the bloodiest movie you’ll ever see, it has its moments. It shows just the right amount to get the point across and moves on. The victims are really unsettling to see as well, and once you watch it, you’ll know why.

While Childs and Carruth give us what we expect from a thriller, some of the other characters are a bit stiff. I found it slightly awkward to sit for so long in the beginning, watching people live their every day lives. It was almost depressing watching Carruth’s character make his rounds while he obviously had his own demons to struggle with. I became a little antsy with having to wait for it to pick up. In hindsight, it probably added to the comfort and subsequent unease when I realized a little too late that it’s getting scary and I’m interested now.

It has been an exceptionally long time since I have seen anything come out of the thriller genre that didn’t make me angry for wasting my time, let alone recommend to someone else. This is a refreshing break from that trend. While The Dead Center didn’t always have me on the edge of my seat, it made all of its punches count. The subtlety in the build up isn’t for everyone, but I think it has a hard-earned place as one of the better thrillers to come out this year.

Continue Reading
You may also like...
Related Topics:Horror, the dead center