New Halloween Movie Bashed For Not Being Feminist Enough

While the new Halloween movie is getting plenty of great reviews, there were a few people who didn’t enjoy the movie, which is fine, movies are obviously subjective. But if you go into a movie and review it simply based on how feminist it is, or something along those lines, you may end up being disappointed. You might find it odd that we’re saying that about this particular movie, considering Jamie Lee Curtis‘s Laurie Strode is a strong and empowered female character and also happens to be the lead in this movie, but one early review of the film was not impressed.

The “review” we’re talking about comes from Flick Filosopher, upon which reading the opening paragraph, you’ll probably see why they didn’t exactly enjoy the film:

I am not a fan of the Halloween series. No, not even John Carpenter’s 1978 original. I can appreciate, from a cinema-history perspective, how groundbreaking it was and how it changed the horror genre onscreen. But, ya know, it didn’t change movies for the better. It popularized the idea of an antagonist as pure boogeyman, a villain with no appreciable motivation beyond insanity, which is tedious from a narrative standpoint and a lazy way to draw a character even if we never get into the horrific ways in which that is a slander on the mentally ill (who are, I’m sure you’ve heard, infinitely more likely to be the victims of violence than the perpetrators). It is the source of the misogynist clichés of the genre that posit that “slutty” girls deserve to die but virginal girls are safe while simultaneously presenting the terror of girls and women — whether they are slutty or virginal — as sexualized and titillating to the presumed-hetero-male viewer. It was all about violent gore as an acceptable be-all and end-all, its own justification for its deployment. And on top of all of that, Halloween simply is not scary. Or maybe I have never found it thrilling because I am not turned on by terrified girls and buckets of blood.

Okay, so how about some critique on the writing/directing?

…director David Gordon Green (Our Brand Is Crisis, Manglehorn) has found not a single damn thing new or fresh to bring to the long-since overplayed slasher genre. Not even in how he tries to be a little bit feminist about it all. (Green wrote the script with Danny McBride and Jeff Fradley, none of whom have any demonstrated expertise or even experience with horror. Mostly, they’re all about adolescent grossout comedy [Pineapple Express, Your Highness]. How did any of them even get this gig? They might at least have brought in a female screenwriter or two to help them with their supposed feminism instead of imagining they could handle it.)

Yes, David Gordon Green has demonstrated no expertise and has only done gross-out comedy like Pineapple Express and Your Highness. I guess Stronger, Joe and George Washington don’t count as good films that aren’t gross-out comedies.

But as awesome as Curtis is — here and always, everywhere — this new Halloween doesn’t give her a role anywhere near as big or as impactful as it should be. That’s actually the most shocking thing about this movie, in fact, how small her role feels: she is reactive rather than proactive, and she doesn’t have much agency, which is what a woman who feels powerless and at the mercy of a madman, as Laurie does, needs to feel better, if we’re talking feminist revenge in a popcorn movie. (Then again, the horror genre has never been as feminist as it likes to think it is.)

Many people, male and female, throughout the franchise have felt powerless to Michael Myers. It’s Michael Myers…

Laurie here talks about how she has wished for Michael — who remains only ever just a hulking, masked figure — to escape from the maximum-security mental hospital where he has been imprisoned, so that she could kill him. And danged if she doesn’t get her wish in a way that represents a preposterous abdication of responsibility on the part of his keepers. That’s plot hole enough… but imagine if Laurie had somehow been instrumental in affecting Michael’s escape. Imagine if she had somehow helped him escape, just so that she could kill him. That would be a feminist revenge worthy of what this movie thinks it’s doing, and fails at.

So if you’re looking for Halloween to be a feminist revenge movie, apparently, it’s not. The review suggests writers should have taken feminist revenge into account when writing this movie –  although I’m not exactly sure how Laurie helping Michael escape would have made the movie more feminist, or better for that matter. If she got into the mental institution where Myers is at, wouldn’t she just want to kill him there?

One user responded to the review directly, saying:

I might have taken your review a little more serious had you not started the article off with, “I am not a fan of the Halloween series. No, not even John Carpenter’s 1978 original”. You lost me there. You definitely shouldn’t even have a right to review this.

This isn’t the first criticism involving Jamie Lee Curtis and Laurie Strode using guns, as a recent Fox News editorial pointed out in the headline: 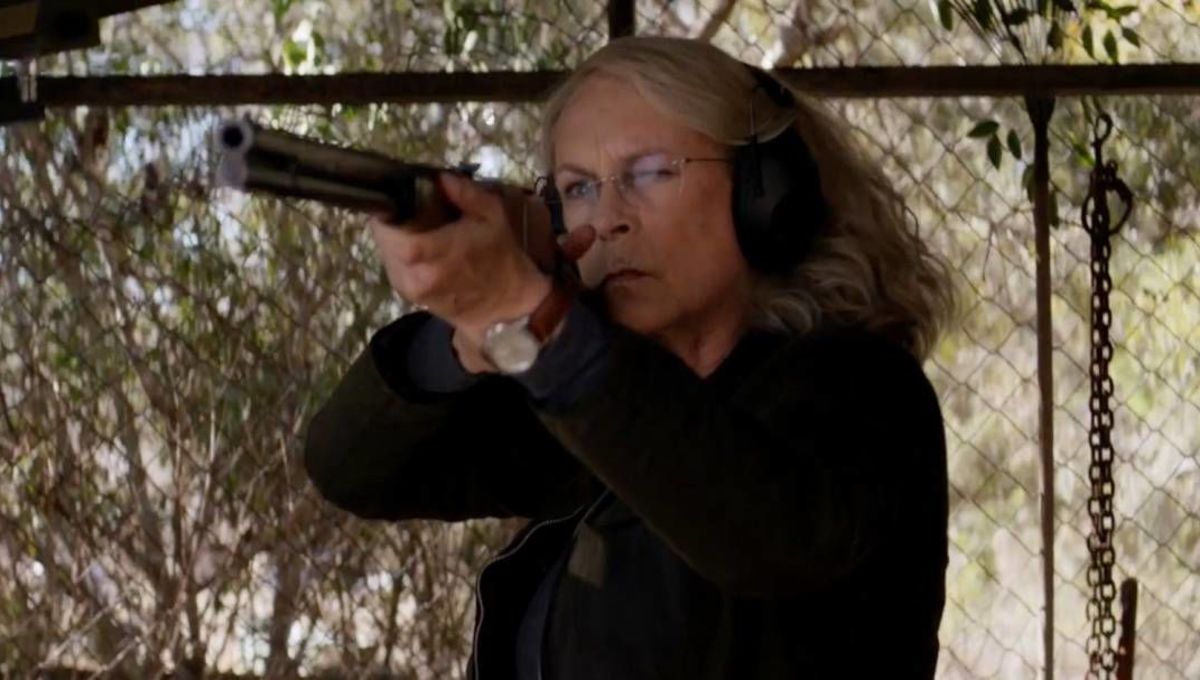 Several Twitter users responded to the headline, pointing out that Strode is in fact, a fictional character, whereas Jamie Lee Curtis is a real life person.

Breaking headline: @FoxNews doesn’t understand that acting is playing pretend, and that Laurie Strode is a fictional character.https://t.co/6OcB7fdbKq

If you were Laurie Strode wouldn’t you carry a fucking gun too. https://t.co/rWqkxdyzM3

“It was just silly, because they were trying to make a point without ever asking me what I really think. And what I think might surprise them.”

“I fully support the Bill of Rights. And fully support the Second Amendment. And have absolutely no problem with people owning firearms if they have been trained, licensed, a background check has been conducted, a pause button has been pushed to give time for that process to take place. And they have to renew their license just like we do with automobiles – which are weapons also.”

In conclusion, if you can’t separate a movie from reality, I’m not sure you’re going to enjoy Halloween. But if you can, for even just the 1 hour and 46 minute run-time of the film, we’re sure you’ll enjoy it, as the majority of the early reviews have suggested.