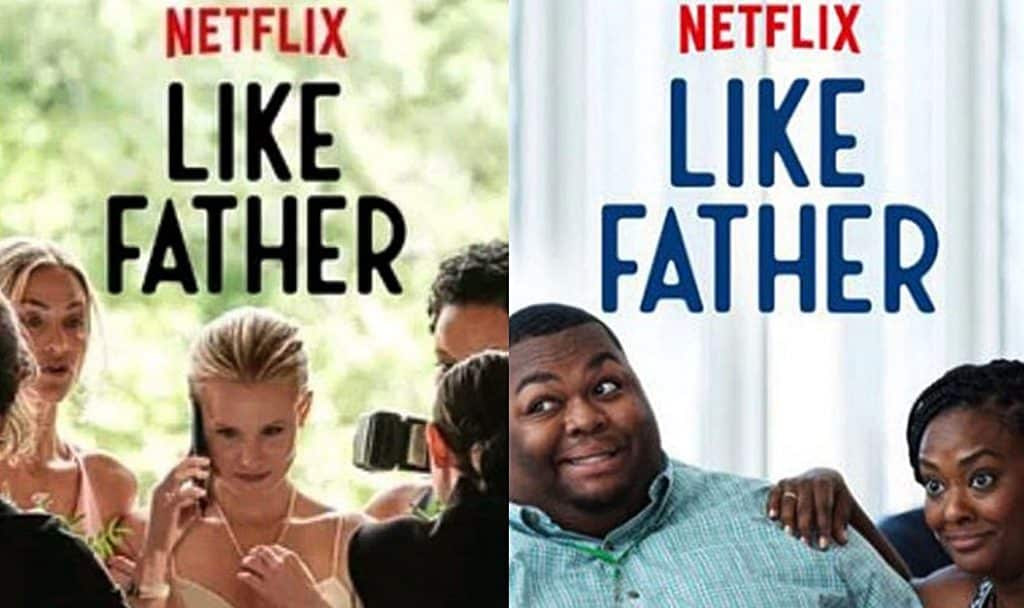 Today’s ‘WTF did I just read?’ article concerns Netflix, who have this week been accused of deceiving viewers by mocking up artwork that falsely suggests some movies contain more ethnic representation than they actually do.

In at least two identified cases, films available on the streaming platform have different photos available on the main menu, one seeming to focus on white cast members, and the other depicting black actors. The accusation leveled at the company is that their algorithm will select which picture is shown to the viewer using previous viewing choices, misrepresenting the material on offer.

The comedy film Like Father features a predominant white cast, with the main characters played by Kelsey Grammer and Kristen Bell, who feature in one of the photos for the movie. There is however a second one depicting a brief scene that only features black actors Blaire Brooks and Leonard Ouzts, which seems to misleadingly suggest they play a bigger part in the movie.

Also under scrutiny are the photos used for British RomCom Love Actually. One of the photos generated for the film focuses in on actor Chiwetel Ejiofor, suggesting that his relationship with Keira Knightley is the focus for the film. In reality, neither were big stars at the time, and their story is one of several sub plots. And whilst Love Actually has many strengths as a movie, racial representation is not one of them.

In a Sky News interview, the editor of MelanMag.com, Joy Joses had this to say about Netflix’s use of algorithms:

“In their keenness to cater to black audiences, Netflix has overstepped the mark with this issue… When I’m scrolling through, looking for what to watch, I instinctively stop when I see black characters highlighted as the lead as that’s what I want to watch.

It’s beyond deceptive to think that I am being manipulated based on my so-called algorithm choices… Why don’t they give us more of what we want instead – black leads in big budget productions? In every other sphere, clear signage is the rule. Why should it be different with film and TV promotions?”

*Update* Netflix contacted us with a statement, that reads:

“Reports that we look at demographics when personalizing artwork are untrue. We don’t ask members for their race, gender or ethnicity so we cannot use this information to personalize their individual Netflix experience. The only information we use is a member’s viewing history. In terms of thumbnails, these do differ and regularly change. This is to ensure that the images we show people are useful in deciding which shows to watch.”

Netflix have strongly denied that this is the case in the past, insisting they do not ask subscribers to provide their ethnicity when they join the service, and that their algorithms do not cater for that particular information. They argue that the differing ethnic makeups in the photos are purely coincidental.

An example of the impressive personalized marketing @Netflix executes: a romcom lover will get a different thumbnail pic for Good Will Hunting than a comedy fan. #FutureofSocial pic.twitter.com/LmzLINx0AF

It’s not the first time that the company has been accused of misleading viewers. A previous piece of artwork used to promote Good Will Hunting was criticized for focusing on the romance between Matt Damon and Minnie Driver, suggesting the movie was a feel-good romance, rather than a complex drama about mental illness.

What’s your take on this? Is this another case of a company using technology to over-exert control over consumers, or simply a slightly disturbing case of coincidence? Sound off below!