National Geographic’s ‘MARS’ Interview: The Expedition Of A Lifetime 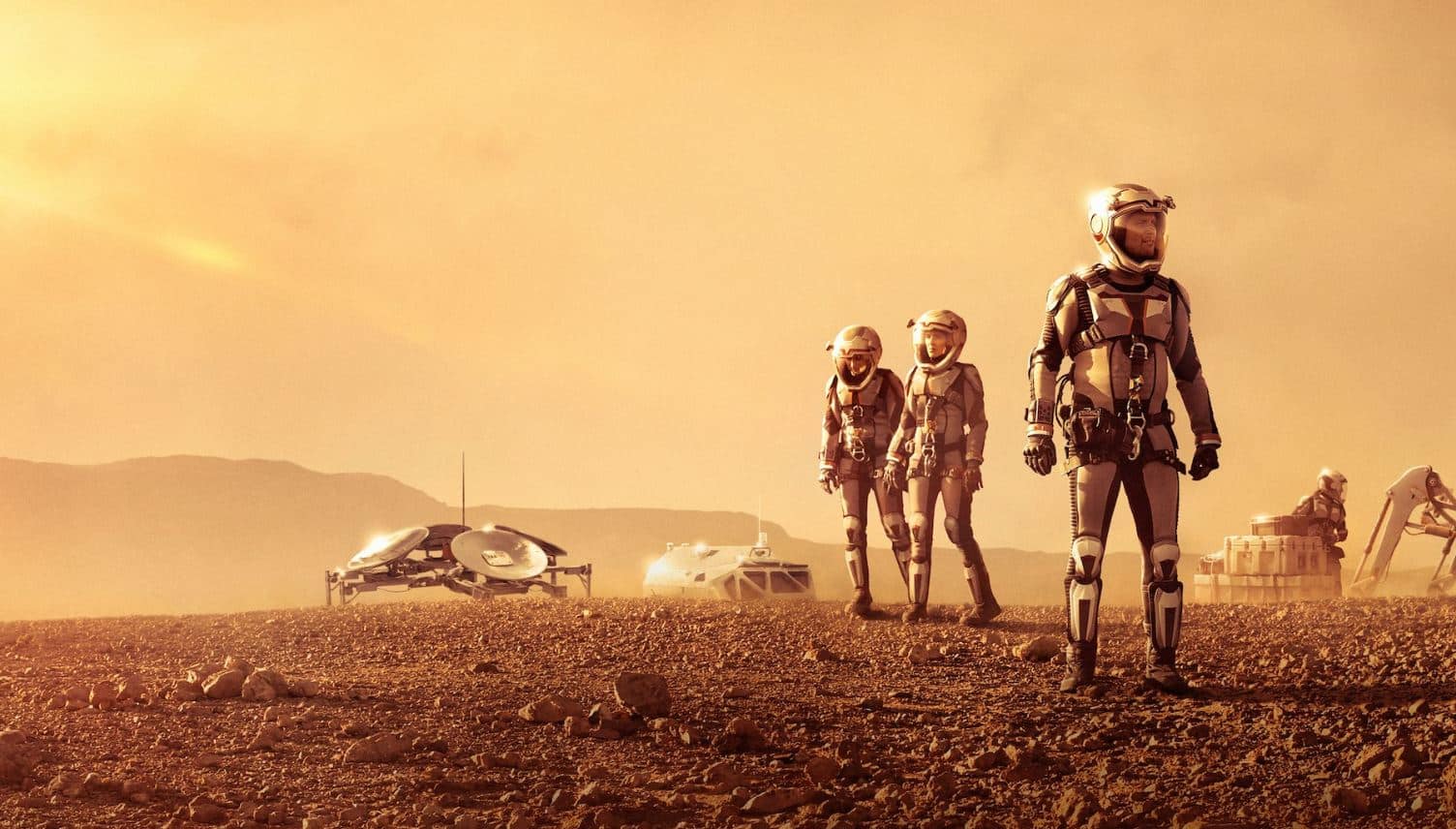 National Geographic‘s MARS docudrama returns for a second season, following closer to reality’s ambition to inhabit the red planet. The threats and opportunities stack higher for the drama story of human dilemma and environmental consequences, all while further documentary parts exhibit the down-to-earth examples of humanity that has us think twice about repeating history. It won’t be much longer until these kind of decisions make their way into the real time and MARS has done plenty research to give us a greater scale of living there this time around.

This year’s New York Comic Con 2018 gave us the opportunity to sit with the team behind the project and see what was in store for the second season. This session’s versatility with the multitude of different team members had us talking the science, human morale and economics of what further journeys we may have this time around. 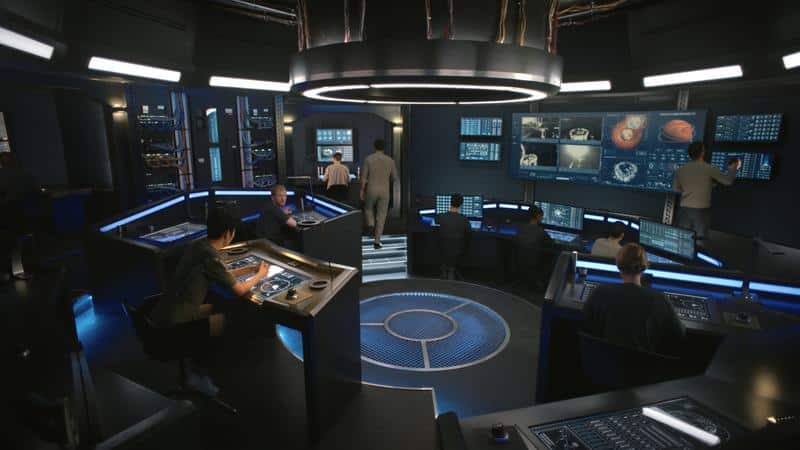 Showrunner Dee Johnson (Nashville, Boss, ER) and co-creator Justin Wilkes (My Next Guest Needs No Introduction with David Letterman, What Happened, Miss Simone?) opened up on bringing the human element with both storytelling and the reality of politics in our very own planet Earth. Both Johnson and Wilkes also serve as executive producers for the second season of Mars, mapping out the narrative to an open audience.

One of the things I found really interesting with the narrative was the mix of real-world science and the fictional story bringing the human element into it. The second season demonstrates that the movement on Mars is not only driven by economical needs but tremendously influenced by political standing. As a project of yours that delves more into social commentary, how challenging was balancing the politics, human ethics and science?

Dee Johnson: It was definitely interesting. Of course, everything was challenging, but it was of interest to us because it is a natural thing that would happen on there. We just sort of plunged right in. It’s not just one group of people that all have the same agenda. We wanted to start the season with this big rock in what was a relatively tranquil pond and how do they then wrestle with all the ethics involved with sticking a claim on this new planet. That’s what even drew me to want to jump in and do season 2. Testing human nature on a distant planet, a lot comes into play, political or otherwise.

Justin Wilkes: And I think the storytelling becomes an interesting reflection of our own planet, the challenges we’re facing, politically and environmentally. Maybe even for the audience, they can start to look at Earth a little differently if you’re seeing those images projected on a distant planet and how human nature will most likely repeat itself. Because that tends to happen overtime.

Yeah, especially with using real-world examples going on in the documentary side.

Justin Wilkes: Yeah, I mean we didn’t have to look to far to find those real-world examples. They were obviously playing on different environmental hotspots on this planet, but we wanted to do it in a way where it wasn’t beating a message over anybody’s head. It’s just sort of presenting all this evidence as to how humans are behaving here and how we might behave going somewhere else

Dee Johnson: And it was different perspectives we were sort of exploring, particularly with the documentary side. We had a green peace activist, we had a scientist, we had oil workers. We had it presented in many different points of view.

However, National Geographic’s MARS expedition could not have been where it was had it not been for the work of Dr. Stephen Petranek, award-winning author of How We’ll Live on Mars to which the series was based off. Serving as co-executive producer and even scientific adviser, we asked how much the information of Mars may have changed from his original research.

Your book [How We’ll Live on Mars] was written back in 2015 and technological advancement has expanded quickly within the few years. In between that time and the latest season of MARS, how do you feel about the changes that may have fallen in between that time? Do you feel it has changed drastically compared to how you first discovered things?

Stephen Petranek: Well, the book was pretty forward. It said based on 6 satellites flying around Mars, with one of them being for over 10 years, there seemed to be a lot of ice on the surface and water underneath there. The mystery of where this water went was almost incomprehensible, it didn’t go out into space like the atmosphere. The book tried very hard to be on the cutting edge of looking forward and still be accurate at the same time. I got lucky because so far, not much has changed. The book did not assume liquid water was on Mars, but we did assume that later as we were doing the series. We got lucky, but we made our own luck because it was based off a lot of people that know an awful lot about this.

Musician and actress Jihae also had an interesting opportunity opened for her role on MARS. Before her first upcoming film appearance in Peter Jackson‘s Mortal Engines, her first televised series already has her playing two simultaneous characters. Experiencing the duality of her characters, Jihae plays both Hana Seung, Mission Commander of International Mars Science Foundaion’s Olympus Town, and her sister Joon Seung, Former Secretary General of IMSF. With the frontier of space and mirroring herself, we asked what it was like delving into balancing the reality of writing through her characters.

You had one of the rare opportunities as an actress to play two separate characters, especially with the isolation between Mars and Earth. Making realistic relationship between the two of them what was the experience like having to tackle this interesting interaction playing by yourself?

Jihae: It was terrifying because it was my first acting role and I didn’t think I could pull it off (laughs). I went to the basics. We all have a duality, a dark side and a light side, a masculine side and a feminine side. I kind of took those basics and filled the flesh and blood of each character by creating stories about their childhood since they were babies to make it real for myself. It was a big challenge but as a new actress, it was very fun and accomplishing.

Of course, the factual side of MARS would not be without the help of real scientists. Our guests were renowned physicist Michio Kaku, author of The Future of Humanity: Terraforming Mars, Interstellar Travel, Immortality, and Our Destiny Beyond Earth, and Adler Planeterium Astronomer Lucianne Walkowicz, known for her research in stellar magnetic activity on planetary adaptation and knowing the astrobiological significance of inhabiting Mars. We crossed the Big Thinkers with a question on human activities recreating global warming on Mars.

A huge part of Mars’s entrance seems to be based upon the more industrial and entrepreneurial investments. Considering how much Earth has been risked with pollution and global warming, how much of a different tipping point would climate change have with Mars, with it having a different atmosphere, climate and environment?

Michio Kaku: Well, we are talking about a very different ecosystem on Mars. First of all, Carbon Dioxide. On Earth, we are creating too much CO2, causing the Earth to heat up. Mars’s atmosphere is almost pure CO2. In fact, it needs the greenhouse effect or it will be even colder without the CO2. However, that doesn’t say we can’t inject Methane or other greenhouse gases to help stimulate another greenhouse effect. When we started to terraform Mars, we may look at our Earth as a negative example on how we are terraforming our planet. For example, we may want to melt the north and south pole of Mars in order to get liquid water to flow on the surface on Mars once again after 3 billion years. We’re now seeing what’s happening on the Earth with the terraforming of the Arctic and Antarctic, so we’re seeing what could happen on Mars if we were already doing it on the Earth. However on Mars, we want to do it for the good purpose of trying to reestablish an ecosystem hospitable to humanity. In other words, the ecosystem of Mars is very different from that of the Earth. It is possible to begin the process terraforming Mars, but it has to be done very carefully. Just look at the mess we’ve made on planet Earth.

Lucianne Walkowicz: Yeah, one of the challenges with some of the ideas around terraforming Mars is that you have all of this CO2. It is true what’s creating a lot of the warming here on Earth, but when you look at all the CO2 available, either locked up in the form of ices or atmosphere, it is really hard to get enough of a warming effect on Mars because it is such a different place. Even if you could put all of that CO2 into the atmosphere and make that pressured enough to have liquid on the surface, it would still be incredibly dry. All that means is the water wouldn’t boil up immediately, but it would still evaporate and be lost to space. I think a lot of our ideas about turning it into a place like Earth, we underestimate Mars and what a complicated thing a planetary system really is.

Michio Kaku: Now, what I would advocate is we send solar satellites to beam solar energy to the polar ice caps to begin the process of melting the ice caps so liquid water flows on the surface of Mars once again. Now, Elon Musk has his own version: detonate hydrogen bombs on the north and south pole of Mars. Since then, he’s retracted that a bit, but I think that’s a little bit premature to think about using nuclear weapons to speed up the terraforming of Mars. (laughs)  I think solar satellites is the way to go.

You have six episodes to look forward to this trek into the unknown. Season 2 of MARS is currently airing Mondays at 9pm EST on the National Geographic Channel.