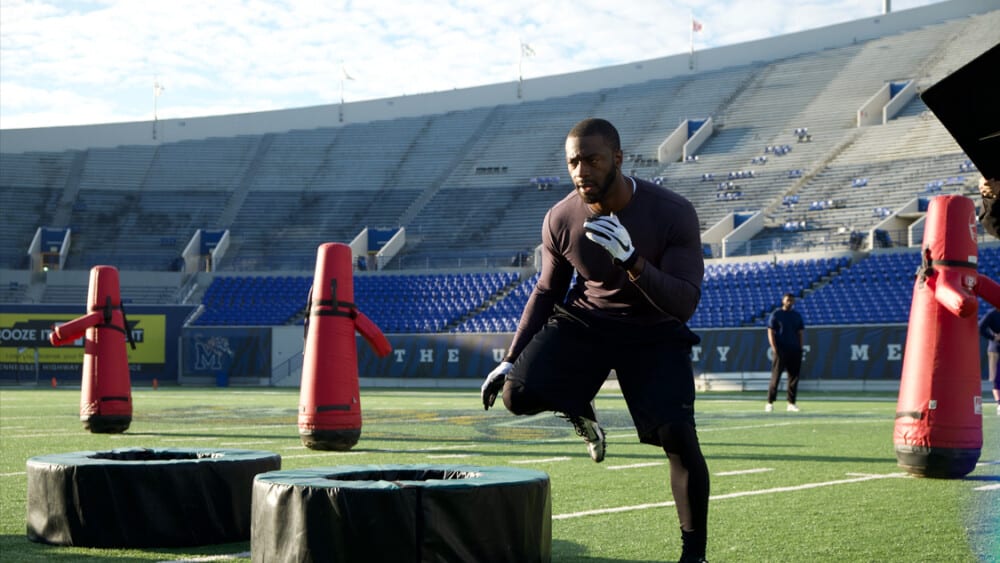 Fighting against the criminal justice system in pursuit of his dreams, Brian Banks’ battle to overturn his wrongful conviction was an inspiring story with a Hollywood ending. With such a noteworthy journey, it’s no surprise that a Banks’ biopic has come into the spotlight. While its cliched execution limits the film’s impact, Brian Banks proves to have timeless appeal with its battle against the corrupt system.

Brian Banks follows the titular football star (Aldis Hodge), who has his promising future ripped away from him after being convicted for a crime he did not commit. Now out of prison, Bank’s fights to have his name exonerated in order to be free from his crimes.

The heart and soul of Brian Banks is star Aldis Hodge, who delivers Bank’s emotional journey with conviction and vulnerability. Hodge displays the triumph of Banks, a man who fought cruel circumstances with all the passion he had in him. The actor impressively plays each emotional beat of the narrative with naturalism, with the performance creating a lived-in character that the audience can easily rally behind. Greg Kinnear and Sherri Shepard also deliver noteworthy performances, with Shepard being one of the film’s emotional anchors as Bank’s mother.

When it comes to biographical stories, this film is as earnest as it gets. Doug Atchison’s script mostly sticks to the factual details of Banks journey, using his story as a means of addressing the continuation of wrongful convictions in our justice department. With Banks himself serving as an executive producer, the timely agenda is conveyed with passion and respect for all involved, with Atchinson’s effort succeeds at capturing the significance of Banks while also crafting an engrossing narrative.

It’s a shame that the film’s good intentions are limited by its formulaic conventions. Director Tom Shadyac delivers a competent effort, but the anemic visual style and overuse of montages to advance the story restrict its dramatic impact. Even with this film giving us a rounded depiction of Banks, I felt like the narrative could have gone deeper into the nuances of his legal battle while giving audiences an objective view of all parties involved.

Limitations aside, Brian Banks is an inspiring biopic that does justice to its timely premise. Aldis Hodge is a star in the making, with this likely being the first of many standout performances.

Continue Reading
You may also like...
Related Topics:Brian Banks, NFL

‘Scary Stories to Tell in the Dark’ Review: Old School Horror Done Right
‘Ready or Not’ Review: The Best Horror Film of The Year
Advertisement
Advertisement
To Top