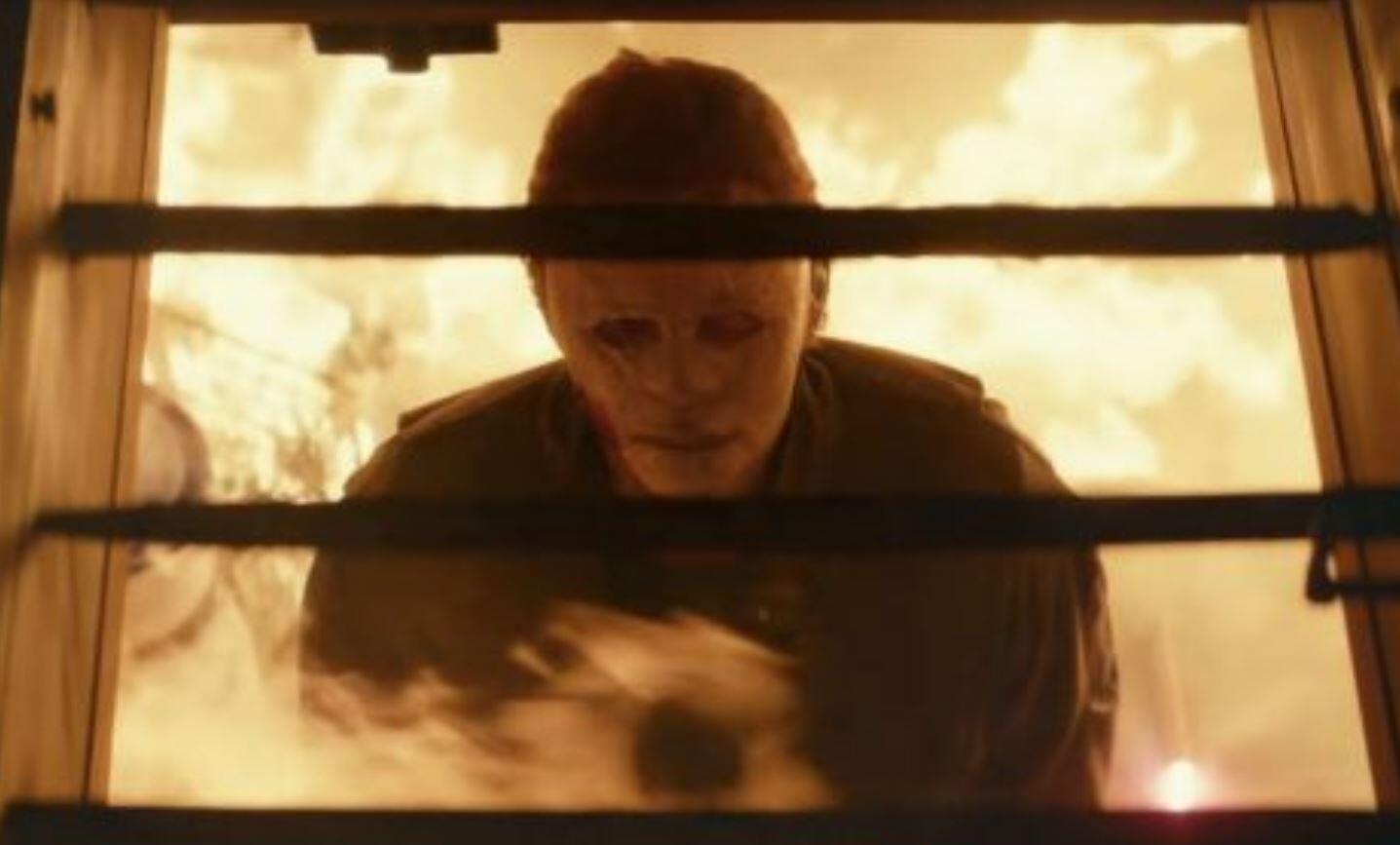 As we approach next year’s release of the all-new Halloween sequel titled Halloween Kills, horror fans have been anticipating and theorizing about how Michael Myers lives. As anyone who’s watched the 2018 film would remember, the climax finishes with Michael Myers being trapped in Laurie Strode’s basement. She sets the house on fire and allows Michael to supposedly burn away while she, her daughter, and her granddaughter escape. But the new footage released for the film seems to indicate how Michael Myers could’ve escaped his potential fiery demise and lived to continue his murder spree.

As you can see in the footage released by actress Jamie Lee Curtis, if you watch around the 14 second mark, you’ll see Michael Myers standing atop the porch of Laurie Strode’s house. The house is on fire and it appears that Michael Myers is holding some kind of tool in his hand. It’s been suggested that this tool could have aided in his escape.

‘Tis the season….. to start screaming. First look at the mayhem David has created for all of you. @halloweenmovie #halloweenkills #strodesstrong @universalpictures @miramax @blumhouse @halloweenmovie pic.twitter.com/klrpzk1Ykg

Obviously Laurie’s basement was loaded with tools and supplies of all kinds, and so it’s perfectly reasonable that Michael found something useful while the fires weakened the actual house. It’s very possible that with a little ingenuity and potentially supernatural strength, that he was able to break free of the basement and reach the outside world.

While we still don’t have the official plot synopsis yet for Halloween Kills, this footage has revealed quite a bit for what we could expect from the new sequel. It not only suggests how Michael Myers lives and could have escaped the confinement of Laurie Strode’s burning house, but also where certain characters play a part in the new story.

For example, in a nod to the original Halloween sequel Halloween II, we see that Laurie Strode is taken to a hospital for her many injuries sustained while fighting against Michael. While that could explain her arc in Halloween Kills, her daughter Karen seems to be taking some time in a police station when granddaughter Alyson makes use of a shotgun.

The footage also gives glimpses of other new and returning characters, including Anthony Michael Hall as an adult Tommy Doyle, so it will be fun seeing how the finished film pieces together storylines from both last year’s Halloween and the 1978 original classic.

What do you think of the footage? Do you think that’s how Michael Myers lives? Let us know in the comments section down below!

‘Avengers: Endgame’ Writers Reveal Secret Ingredient Behind The MCU
Colin Farrell In Talks To Play Penguin In ‘The Batman’
Advertisement
Advertisement
To Top