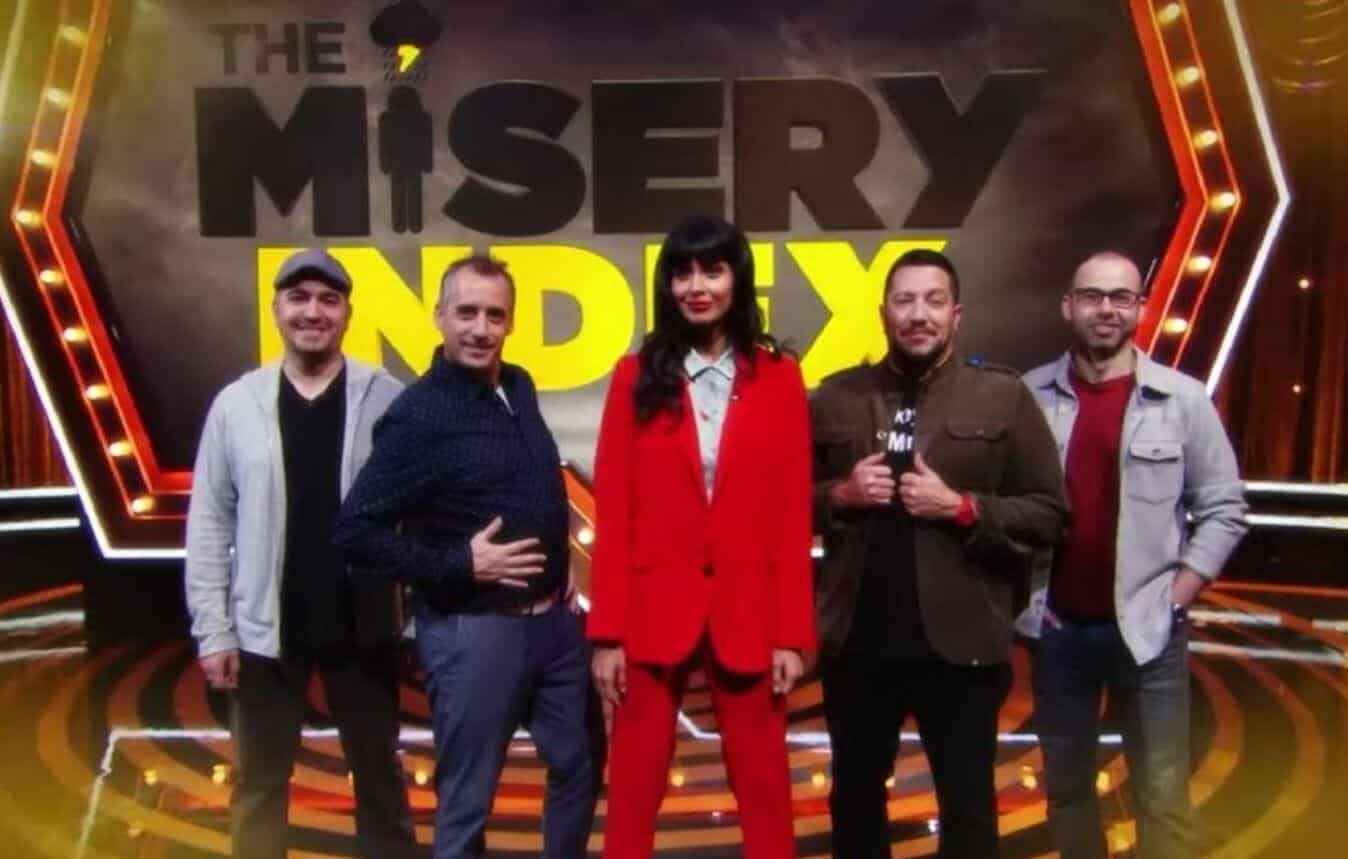 You would be hard pressed nowadays to meet anybody who hasn’t at least heard of the Impractical Jokers TV show. Four lifelong friends compete to embarrass each other, and we get to enjoy their misery. Well, it looks like they’ve taken that misery and turned it into a game show! The Misery Index brings the Tenderloins, Sal Vulcano, Joe Gatto, Brian ‘Q’ Quinn, and James ‘Murr’ Murray in to help contestants rate real life stories on the Misery Index to win a ton of cash. Hosted by Jameela Jamil, TBS proudly presents Misery Index!

Are you going to use Misery Index to inspire bits and punishments on Impractical Jokers?

Murr – What was the clip about the guy that lost all his hair?

Joe – No, they were just reading your bio.

Murr – Oh, that’s it, they were just reading my bio. I confused that. I tell you what, though, they actually used some of the punishments from ‘Jokers’ on Misery Index to screw with us.

Joe – So we had to analyze our own punishments, which was really fun.

While you guys love to relish in each other’s misery, do you see these stories on the game show and feel differently? Is there a bit of empathy for these people?

Joe – Yes. There’s an empathy for sure.

Q – Yeah, I’d like to think that the show wouldn’t work if we were like, ‘Oh, look at this jerk!’. It’s about feeling what people are going through to be able to accurately measure where they are on the Misery Index.

Jameela – It’s how you win, is through empathy.

Joe – and also dollars on the game show… a lot of schdole on stage, yeah.

Joe – And all the reasons [the contestants] needed the money were real reasons.

Jameela – Well, except for that one woman…

All – who wanted the handbag…

Joe – That was the best moment in the show, when you asked her, ‘Oh, what do you need the money for?’ and she said, ‘Handbags’. Really…

Jameela – At that point, we’re no longer really invested in you winning.

Q – Yeah, that’s the thing. When we go down, breaking from filming, we’ll talk to the contestants. You know, we’re hanging out, they’re good people. And they’ll tell you what they need the money for and it really puts the pressure on you. It’s like a surgery. Oh, well now I gotta win this for them. It feels bad, when you don’t win.

Joe – The first time that someone didn’t win the money, it was our first round of filming, and Sal makes it to the finals. And the person didn’t win all the money. And, Sal looked at me and goes, ‘Ah, I feel so bad. Should I just give them the money?’. Isaid, ‘We can’t do that’. You feel that stake, you’re that invested.

Murr – We did give them an Olive Garden gift card with $20 on it.

Q – And when you’re there, you’re family.

Now, you’re seeing these miserable moments for the very first time on the show, correct?

Do you think some of them can’t be real?

Jameela – Some of them I did, because I have to to shepherd these maniacs. And so I have to be prepared. Sometimes you have to explain it because it’s an elaborate new article. So I was definitely able to see some of them beforehand. But also, I’m so squeamish, so I need to be prepared.

Joe – Yeah, there will be times that we come back and we’re speechless. We’re just like, ‘Wow. That really happened to someone?’

“But they’re all confirmed stories, right?”

With Impractical Jokers being 8 seasons deep, and you guys are a well oiled machine, what is it like jumping to the new ‘game show’ style format?

Joe – Ready to do it again. We found a format for our show that again shows our friendship on display in a very good way. Which I think, everybody would agree that’s what they like about Jokers. It’s as much a show about friendship as anything else. On [Misery Index], it’s as much a show about five friends debating intensely on where these stories fall on the index, and people playing along. It sounded like The Price is Right in that studio. People were yelling up numbers, everyone plays along.

Murr – It was a complete natural fit from what we do on Jokers. And Jameela fit right into our chemistry. It could have not been more fun to do.

Joe – It was us being us, and I think that’s what we’re comfortable with. We’re not good at playing other people.

Where you shocked by how some of these events were categorized on the Misery Index?

Joe – Yeah! The bear smack! This dude gets smacked by a bear, and it was worse to stub your toe on the beach. I was like, ‘What?!’. Like, it didn’t compute. But, then again, we’re not psychologists. This is ranked by real psychology, there’s a real science to this. We are just mental cases, I think.

Jameela, how did you get involved in the project?

Joe & Q – How DID you get involved in the project?!

Q – Because you are slumming with us!

Jameela – I’m being kept here against my will… No, I got a phone call about this game show. I think they had seen me on [Late Night with] Seth Myers and then wondered if I’d ever be interested in hosting, not having done their research and knowing that I had been a host for 9 years back in England. So, when they called me and explain the premise of the show and told me it was with these guys, instant yes. That was it. I couldn’t get that contract signed fast enough. It was such an easy yes and I had already known at that time, as it was a year ago, that The Good Place was finishing, so I had no idea what I was going to do next and how do I follow that? And this was so left field and so ridiculous and so funny and these guys are so wonderful that this was the natural next step for Tahani.

You all seem to get along so well.

Jameela – Yeah, we genuinely get on.

Q – I actually have a hard time seeming anyone else. It was odd. And I realize that a lot of people that work together will say this in public, but how quickly we meshed and how we love her was [snaps fingers] so fast. You meet a lot of people when you’re on a TV show, but I don’t know if you bond as quickly as we did with her. She’s just amazing.

Joe – We were all brothers and now we got the sister we never knew we had.

Joe – And she keeps us in check, which is good. Like, ‘Guys, its a game show, we gotta get back on track here’.

Q – All barriers dropped within a day.

Jameela – [scoffs] About an hour.

Jameela – Yeah, they desperately need someone to tell them to shut the fuck up. Desperately. And I was it. It’s really exciting to go out in public with these guys. It’s like hanging with the Beatles. They’re so normal and down to earth, that you can’t really get a sense of just how huge they are, but they’re known all around the world. And coming in today, I felt really ‘chuffed’, which means proud and excited.

Joe – We’re world famous, is what she’s saying. Why is nobody writing this down…

Jameela – You are the Adele of comedians.

So, what’s the status on the Impractical Jokers movie?

Joe- It’s done. It’s great. We’re excited for the world to see it. What really happened was the big shake up over at Time Warner Media. You know they got bought out by AT&T. And there was a lot of things.. you know, that a big move, so a lot of things had to get into place before it could be released. I think now that they’ve settled all in, they’re ready to move forward.

Q – They forgot they made the movie.

Joe – Somebody found it on a shelf. A VHS copy.

Murr – In retrospect, we shouldn’t have shot the movie in VHS, that was our bad.

So, there you have it. If you love the Impractical Jokers, you’re going to love Misery Index. Make sure you tune in to TBS for the two episode premiere this Tuesday!

Are you excited for The Misery Index? Let us know in the comments below!

Did Tony Stark Predict The MCU’s Next Big Bad Villain In ‘Avengers: Endgame’?
‘Eternals’ Cast & Crew Reportedly Evacuated Off Set Due To Bomb
Advertisement
To Top