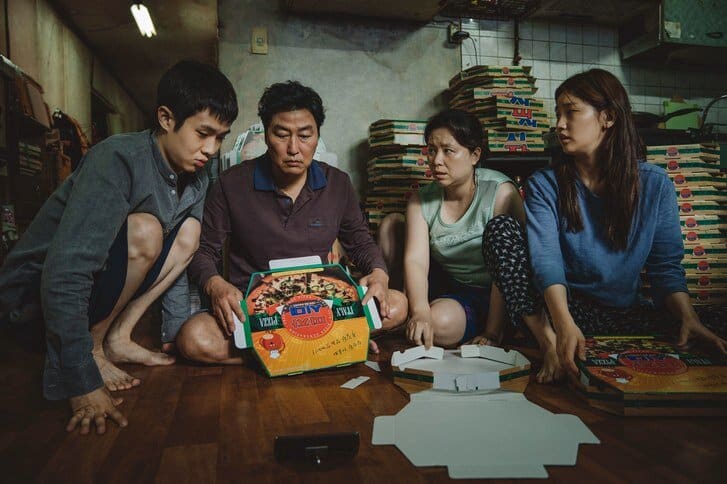 From his start in immersive South Korean genre fare like The Host to naturally transitioning with idealistic American features like Okja, director Bong Joon-ho has established himself as one of the cinema’s boldest voices. His idiosyncratic mixture of genres with deeper social ideals makes each one of his films stand out from commonplace cinema. Continuing to further his craft with his latest venture Parasite, Bong Joon-ho reaches a new height in a masterfully accomplished feature that currently stands as one of the year’s crowning achievements – if not the crowning achievement.

Parasite follows a nuclear family living in the slums of South Korea, working low-pay gigs just to make ends meet. When the son Ki-woo (Choi Woo-shik) gets an opportunity to tutor for the wealthy Parks family, they soon try to exploit this connection to find the economic prosperity that has always evaded them.

This synopsis of Parasite barely touches the surface in what this film has to offer, but this is a film best experienced going in with limited exposure. What I can ensure is that audiences are in for an experience that equals in roller coaster thrills and thought-provoking moments.

Joon-ho’s skill behind the camera is felt throughout. Visually, his mixture of impressive one-track shots and stylistic edits are on display, picking up in frequency as the story reaches its tense second half. What impressed me most is his masterful handle of pace and tone. Parasite’s slow-paced introduction is a perfect means of establishing its family dynamic, with the film effortless changing gears while handling a variety of comedic, dramatic, and action-oriented moments. It’s truly a sight to behold, as Joon-ho balances all these elements in a way few other auteurs could match.

Parasite packs one of the year’s finest ensemble casts. Song Kang-ho, Jang Hye-jin, Choi Woo-shik, and Park So-damn create a wonderfully naturalistic family bond onscreen as the Kim-taeks, creating the emotional investment that creates greater impact. The work of Choi Woo-shik and Park So-damn is especially strong, with Woo-shik portraying a man disillusioned by his intimate relationship with the girl he is tutoring and So-damn playing the charming mastermind behind the family’s endeavor.

Like any great film, Parasite deeply impacts its audience on both an emotional and thematic level. Jong-ho’s screenplay is a great canvas for depicting class warfare, weaving seamless metaphors throughout that ring true without being preachy. Perhaps my greatest takeaway from the film was just its depiction of wealth and the allure it holds over the Kim-taek family, as their humanity is slowly stripped away throughout in the pursuit of success that remains an arms-reach away.

Leading to a finale that offers thrills and a justified gut-punch, Parasite is an achievement that will stand the test of time with its bold depiction of a timely subject matter. Don’t be surprised if this movie pops up throughout awards season.

Continue Reading
You may also like...
Related Topics:Oscars, Parasite

‘Midway’ Review: Cheesy Old-School WWII Film Fails to Inspire
‘Charlie’s Angels’ Review: A TV Story On A Big Screen Budget – But Not For The Best
Advertisement
Advertisement
To Top