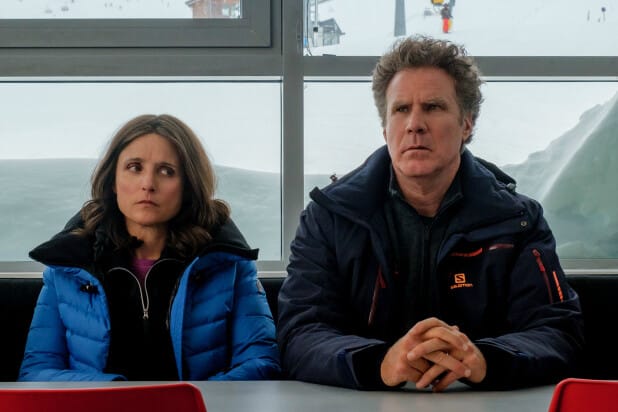 Remakes are a common occurrence in contemporary Hollywood, and while some celebrate seeing old properties come back to life, others dread the notion of retreading familiar ground. This can be especially frustrating when studios “Americanize” an international project, which is the case with the latest Will Ferrell and Julia-Louis Dreyfus vehicle Downhill. In an effort to update 2014’s critical darling Force Majeure, Downhill captures some of its predecessor’s dark nuances while also falling short of its high standards.

Downhill follows Billie (Dreyfus) and Pete (Ferrell), two parents stuck in the doldrums of family life that decide to spice things up with a trip to the Alps. When a seemingly fatal avalanche comes barreling down at them, Pete makes a rash decision that represents a growing divide between the married couple.

It’s an interesting experience seeing Downhill before catching up with Majeure, with the former offering some intriguing elements that the latter fleshes out with confidence and artistry. That being said, I do think Downhill stands on its own with a deftly awkward sensibility that builds effectively throughout.

The joy of this remake comes from watching Ferrell and Dreyfus stretch their wings with this material. Dreyfus plays a germane role as the narrative’s emotional anchor, exploring the uncomfortable reality of a matriarch who is at a loss with her husband’s changing identity, while also mining some strong humorous moments with her signature dry-wit. What’s truly refreshing is seeing Ferrell, synonymous with playing an affable manchild, grounding his persona into a downright selfish character who longs for his free spirit days after dealing with a midlife crisis. The comedic star dedicates himself to Pete’s most detestable qualities, crafting a well-realized character who is constantly interesting to follow.

Downhill works when it stays true to its source material roots. Writer/directors Nat Faxon and Jim Rash admirably try to ape the thematic ideals of Majeure, exploring the complications of marriage while further analyzing the desire to find one’s identity outside of that dynamic. Their success lies in the depiction of painfully real family moments, such as an argument that takes place between Billie and Pete as they try to quickly gather the family for an expensive tour. I appreciate that Faxon and Rush stay dedicated to murky truths that the narrative unpacks, something that is refreshing to see for a mainstream release.

That being said, Downhill still features a bevy of issues. The third act feels rushed and oddly clean considering what came before it, playing it safe instead of furthering the complicated dynamics that intrigued throughout (it’s slick 86 minute runtime certainly could have been extended). There’s also a tonal clash that occurs throughout, with the desire to stay true to the original’s dry sensibility matched with broader additions. Whether its Miranda Otto’s over-the-top performance as a promiscuous hotel guest or comedic bits that rely on pratfall humor, these elements feel out of touch and aren’t clever enough to fix that feeling.

Downhill has been destroyed by critics (40% on Rotten Tomatoes) and audiences (a dreadful D CinemaScore) alike. While I can understand critics’ ambivalence towards another remake and audiences’ bewilderment towards a seemingly-broad comedy that morphs into something darker, I couldn’t help but be engaged by Downhill’s modest effort to bring its complicated source material to American audiences. If you’re willing to acknowledge the movie outside of its predecessor, there are some refreshing splendors to be explored.