The Tomorrow War. That title alone opens the door to many issues mainly because of the subject it leads to: time travel. It’s very hard to create a cohesive story with little to no plot holes – you might see those words used a lot in this review – when it comes to tackling the subgenre.  Director Chris McKay and writer Zach Dean thought maybe they could have a crack at it and slap on some impressive action scenes that would show the acting/leading man range of Chris Pratt. What was created, though, was another dumb action movie that forced me to check my brain at the door for the 2-hour and 20-minute journey – and I’m fine with that.

The Tomorrow War stars Pratt alongside seasoned actor J.K. Simmons with Yvonne Strahovski, Betty Gilpin, and Sam Richardson to round out the bunch. The title of the movie makes a case for being a strong contender for an obvious plot. There’s a war happening in the future and people in the past are recruited to stop it. The huge plot holes don’t stop from there – but I won’t go into detail because of spoilers. 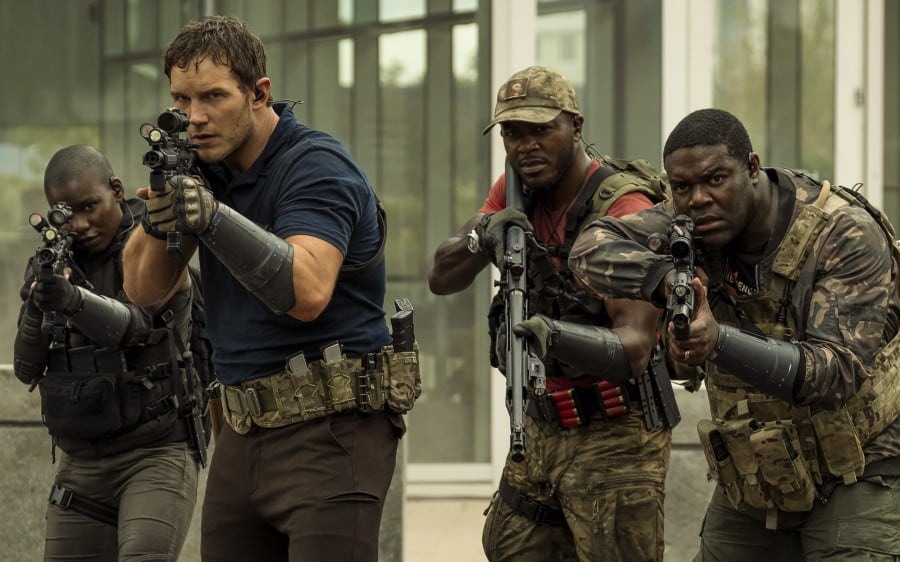 The story’s foundation is weak – but was strong enough to keep my attention. I found myself questioning the logic and motivations of some of the main characters because the writing was desperately trying to evoke some level of feeling towards them. Unfortunately, the story relegates Gilpin’s character to nothing more than the manifestation of a shoulder to cry on. Gilpin deserves so much more than that.

And I’m not done.

The plot and story beats of The Tomorrow War fall apart quickly if you just think about it for five minutes. It’s like Zach Dean wrote himself into a room full of plot holes and lazily tried to explain away those errors with throwaway dialogue that could’ve been avoided if more time was given. This is funny because there is so much going on at a breakneck speed that shows the movie’s unintentional shallowness. One thing that the movie did do was force me to put down my notepad and just watch it and enjoy the battle scenes.

McKay does a great job when it comes to some of the action set pieces and keeping the tension up. There are plenty of them to go around in The Tomorrow War and never come off as tedious. Even though I got a sense that some of the characters were well protected with a thick layer of plot armor. There’s one scene that stuck out to me that would’ve been perfect for a third-act action scene but was instead placed at the tail-end of the second act. It almost makes the final battle borderline lackluster.

Let’s talk about Chris Pratt. I didn’t jump on the Chris Pratt train until Guardians of the Galaxy, and I usually enjoy seeing his character in other Marvel movies. His role in the Jurassic World movies was subpar but at the time I believe it was just a poorly written script.

I get Hollywood is pushing this guy as a leading man but it’s all for naught if Pratt doesn’t have someone he can bounce off or a good script to work it. His scenes with Simmons display two separate acting schools as Simmons acts circles around Pratt. The chemistry between Pratt and Richardson is well put together when the two share a scene and I wished it had happened more often.  Hell, even Strahovski flexes her acting chops and made me care more about this world than Pratt.

This brings the heart of the movie to fall squarely on Richardson and Strahovski. It was like Dean or McKay gave the best comedy and emotional beats to these two, respectably. For fuck’s sake, I even felt more of a connection with Edwin Hodge’s role. 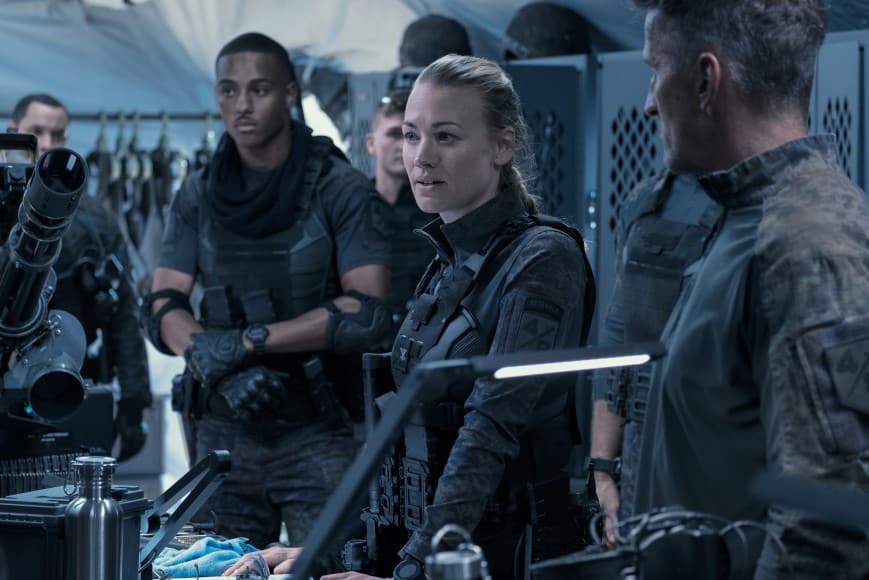 The Tomorrow War is a big summer action film that might’ve done okay at the box office. Time-traveling movies can be interesting – and when they’re combined with action, it’s possible for some fun that doesn’t insult one’s intelligence. The Tomorrow War is a big dumb shoot-em-up movie that looks great – but don’t expect a whole lot from it. Now, whether or not that’s something you’re looking for is entirely up to you.

‘F9: The Fast Saga’ Review: Family-Physics = A Lot Of Fun
‘Jungle Cruise’ Review: An Exhausting Ride That Could’ve Been Better
Advertisement
To Top