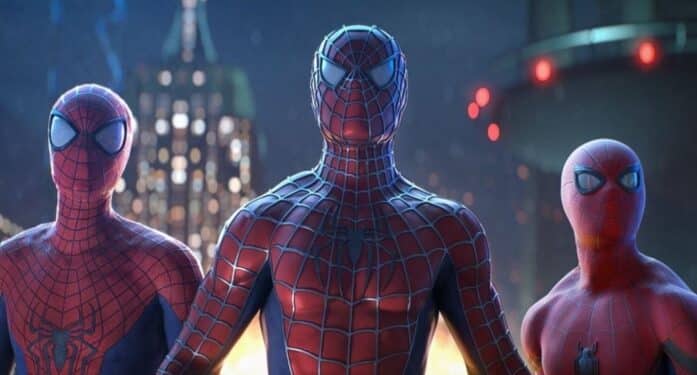 The Marvel Cinematic Universe will be expanding one way or another with Spider-Man: No Way Home. The upcoming film is confirmed to be bringing several multiverse villains into the MCU, including Doc Ock from Spider-Man 2. But what’s remained unconfirmed is whether or not earlier interpretations of Peter Parker, played by Tobey Maguire and Andrew Garfield, could also be appearing. There have been rumors and reported leaks to suggest that they will. Of course, there have also been denials and debunks. Now a new leaked image seems to suggest that there will indeed be multiple Spider-Men in Spider-Man: No Way Home.

The leaked images have come from the set of Spider-Man: No Way Home, and were taken at a time during the film’s production. As you can see in them, it appears that there are several Spider-Man suits being used in the film. While you can clearly note Tom Holland’s Spider-Man suit, there also appears to be the inclusion of both the suits worn by Tobey Maguire and Andrew Garfield as well. Clearly this lends to the theory that multiple Spider-Men from the growing multiverse will be appearing in Spider-Man: No Way Home.

What’s more, there also appears to be battle-damaged armor of some sort for the Green Goblin. It’s been teased that Willem Dafoe would be reprising his role for the new movie, and this certainly lends to that suggestion.

As you can see:

Every #SpiderManNoWayHome Leak we got Tonight!

Leaked photos are circulating from the Spider-Man: No Way Home set of all three suits hanging up side by side! 🕷

Indeed, it looks like this new outing is shaping up to be quite a massive Spider-Man film. It’s not just continuing the story of the MCU’s Peter Parker, but of several Peter Parkers – even if just by catching up with their old villains like Doc Ock or Electro. There’s clearly a lot going on here.