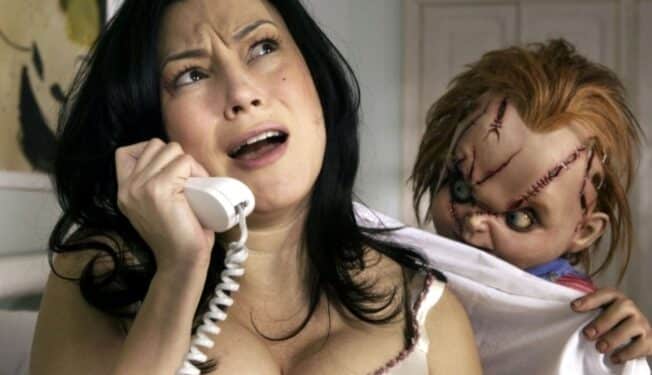 The Child’s Play franchise took an interesting turn when Jennifer Tilly played Tiffany Valentine in Bride of Chucky. The character has become just as iconic as Chucky, and Jennifer Tilly even got to play herself as a result in Seed of Chucky. Of course, the 2004 film Seed of Chucky was notoriously criticized and rather divisive amidst fans and critics alike. It seems that the studio also had issues with the film, according to Jennifer Tilly.

Specifically, they claimed Seed of Chucky was “too gay.”

Jennifer Tilly discussed the matter in an interview with ComicBook:

“I sort of understood that I couldn’t play Tiffany forever,” Tilly stated. “And after Seed of Chucky, the studio was like, ‘That was too gay, it was too funny, and there was too much Jennifer Tilly;’ because Seed of Chucky was sort of the apex of gayness that we had John Waters and the genderfluid kid and me walking around making wisecracks and I was a doll and Jennifer Tilly. So they sort of like, ‘Okay, you’ve had your fun. Let’s put that to rest.’ So I understood it was going to be a whole new situation.”

Indeed, Seed of Chucky seemed like an end to the franchise for quite some time. It wasn’t long after that every slasher icon was simply rebooted or remade in some way. Halloween, Friday the 13th, A Nightmare on Elm Street were all remade after the release of Seed of Chucky. And that’s just the tip of the iceberg. Nevertheless, by 2013, a true sequel was released with Curse of Chucky. And Jennifer Tilly, despite her beliefs that she wouldn’t be allowed to return, did come back as Tiffany for the exciting ending.

She further reprised her role as Tiffany for the sequel Cult of Chucky, and also the newly released TV series Chucky. She explained how fun it was to return in Chucky without having to adhere to tropes associated with most people her age.

“I have to say, it’s so fabulous to get on the set and put on my push up bra and my high heels and strut around and do all this stuff that I haven’t done for a long time. Because you know, you get to certain age, all of a sudden you don’t have any more sex scenes or kissing scenes and they don’t really want to see you in the sexy dresses anymore. So it’s just like, Tiffany is such a fun, campy delight. Like I always love playing her and he wrote so much stuff for me to do.”

She also noted what fans can expect for the rest of Chucky this season.

“It just gets crazier and crazier. The last episode is absolutely bonkers. I think the fans are going to be thrilled, but every time I have, when I was watching this and especially with the backstory, I had no idea that Tiffany was so evil. I always thought she was just a really sweet girl that had been led astray. But I think I’m a little delusional; as an actress, you find the good in somebody. I was like, ‘Oh, she’s a mother and she’s got a complicated kid and she likes Martha Stewart. She loves her man. And you know, once in a while she has a little slip and she accidentally kills somebody, but then she feels really bad.'”

It’s nice to know that times have changed since Seed of Chucky was first released. It definitely feels like the franchise is at a high point, and it’s nice to know Jennifer Tilly is still being a part of it.