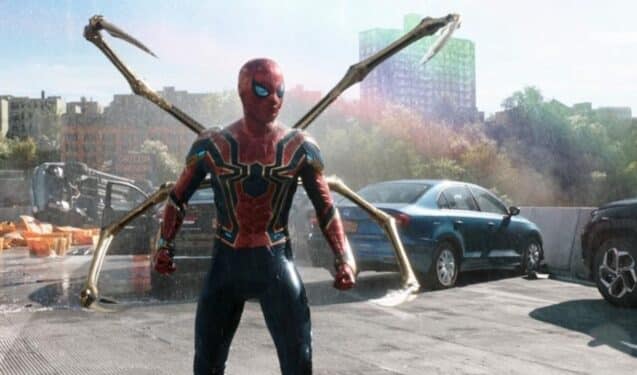 There are so many differences between the three Spider-Man movie franchises we’ve gotten over the last twenty years. One of those differences has been the costume. Tobey Maguire had the same costume for three films. Andrew Garfield had two costumes. Tom Holland, however, has had a multitude of costumes over his three solo films and his three Marvel Cinematic Universe appearances. One such costume came during Avengers: Infinity War and has sporadically been a part of Spidey’s life ever since: The Iron Spider Suit. However, Tom Holland isn’t exactly fond of that costume.

He then shared that the Iron Spider Suit was his least favorite, mainly for one reason – the wrist gauntlets. Holland joked about how the prevents wrist bending and were ‘unrealistic’:

“Tom Holland: Do you want to know what annoys me about it? Those stupid gauntlets, right? You can’t do that with his wrists?

Zendaya: That’s where you draw the line, in reality, dude?

Tom Holland: Yes! That’s why people love these movies, because albeit, it’s fantastical, logistically it makes sense! Mate, imagine the bruises he must have on his poor hands!… There’s cool aspects to it, it’s just the hand thing irritates me. That’s why when I shoot webs in the suit, I don’t do this, I do this!”

Tom went on to show that in that suit he couldn’t do the iconic bent wrist style of web shooting, but instead has to keep his wrist straight. It may seem trivial to some, as Zendaya laughed at his reasoning, but he actually makes a solid point. Those gauntlets are not practical, especially for a character like Spider-Man. A character who relies on his wrist mobility for web swinging and his fighting style. It was significant enough that Holland had to adapt his web shooting style.

Fortunately for Holland, it looks like the Iron Spider Suit is retired. The nanotech was partially taken my Doc Ock, and then returned whilst Holland was wearing another suit. And, as the movie came to an end, we saw that Holland’s Peter Parker had made himself a new suit, sans any real Stark tech. And, more importantly, sans the massive wrist gauntlets.

Do you agree with Holland’s assessment of the Iron Spider Suit? Let us know in the comments below!