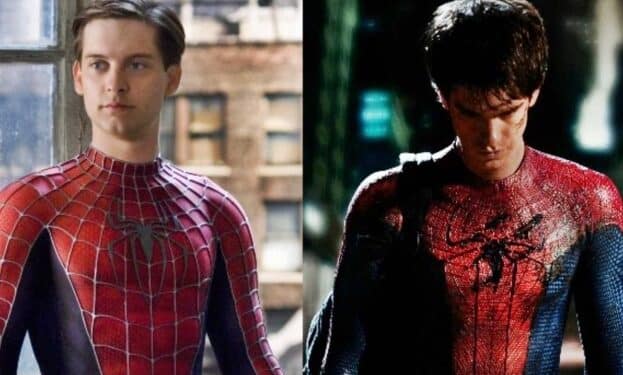 Specifically, the image shows the three cast members standing atop a golden-lit Statue of Liberty. The statue is illustrated holding Captain America’s shield. Furthermore, each of the different Spider-Men stand on one of the crown’s spikes. While there was a similar moment in the film, it wasn’t quite depicted in this way.

As you can see below, it really is a stunning piece of artwork:

One of many frames I worked on for Spiderman: No Way Home together with my buddy @okon_marek who built this amazing set (iterated for purpose of each concept art). pic.twitter.com/TaTfi5rGIz

Maciej Kuciara included the following caption with the image while sharing on Twitter:

“One of many frames I worked on for Spiderman: No Way Home together with my buddy @okon_marek who built this amazing set (iterated for purpose of each concept art).”

It’s definitely been a pleasant surprise to finally have Tom Holland, Tobey Maguire, and Andrew Garfield together for Spider-Man: No Way Home. This new concept art only emphasizes how great it is to see the three in the same film. With that in mind, it also seems likely that we’ll be getting to see more official concept art from Spider-Man: No Way Home in the near future. As such, fans can stay tuned to ScreenGeek for updates on those as we have them. We’ve already seen one No Way Home concept artist share his unofficial image of Tom Holland wearing a Venom-infected suit. So there’s no telling what surprises will be in store for fans.