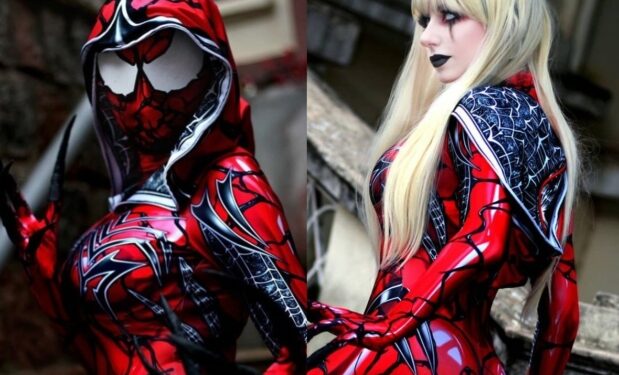 With the Marvel Cinematic Universe and its many associated comic books becoming more popular than ever, there’s been a similar popularity increase for cosplaying. As a result, some comic book fans have been coming up with incredibly breathtaking or accurate costumes in an effort to portray their favorite characters. While many of these tend to be more well-known characters, others are surprising to see and often obscure. This is more or less the case with the below cosplay, which features an attempt to recreate Gwen Carnage, a symbiote-infected version of Gwen Stacy.

While the superpowered version of Gwen Stacy we most often see happens to be Spider-Gwen, there are some rather interesting variants. This includes a version of Gwen Stacy that’s become contaminated with the aforementioned Carnage symbiote. It’s certainly a unique combination of characters, and it’s that type of innovation that keeps the comic book storytelling fresh. Similarly, there’s something refreshing about seeing these characters brought to life via cosplay. After all, while it’s always possible – it doesn’t seem likely at this point that we’ll be seeing Gwen Carnage in live-action any time soon. As such, this is probably the next best thing.

Here’s the Gwen Carnage cosplay featuring @GiuHellsing, which you can see below courtesy of @BellasCosplay:

It’s obvious that the image is rather eye-catching, for a variety of reasons. But the costume itself is rather beautifully designed – with some lovely shades of red and black that contrast incredibly well. There’s also something said about the glossy coating, which gives her a rather ethereal appearance. Likewise, this ethereal appearance can be seen with her eyes – which are an eerie milky white. She’s certainly not the type of Gwen Stacy that fans are used to seeing.

As of this writing, fans can see the Marvel Cinematic Universe film Spider-Man: No Way Home which is currently out now.