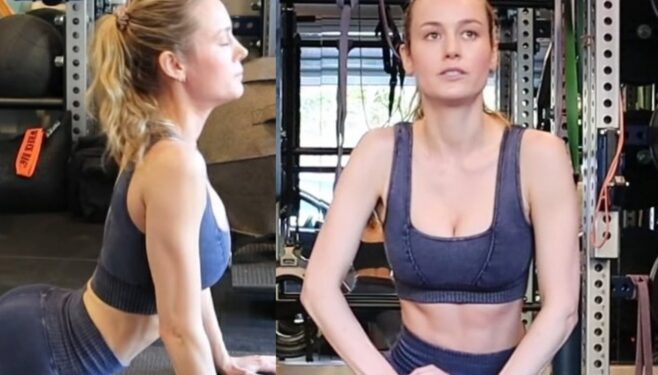 Actress Brie Larson has regularly updated her fans with the progress of her various workouts and exercise routines. The Captain Marvel actress does her best to stay in shape and maintain her physique for her popular superhero role. And, as those who’ve followed along with her various social media updates, know that the actress does a great job. Now Brie Larson has shared her 2022 workout goals in a new video along with several photos.

It’s clear that she’s very passionate about her work and doing what she can to keep up with it physically. This is emphasized in an inspirational caption she added to her photos on Twitter, adding the following quote:

You can see Brie Larson explain her 2022 goals in the workout video below, along with the photos that were shared with her inspirational quote from the video. Here they are:

It’s worth noting that she doesn’t want to focus solely on herself in these posts either. She wants to include her followers and keep them motivated to workout and exercise as well. This is clarified in the description for her YouTube video:

“It’s 2022, and we’re off to a great start… right?! If you clicked on this video and you haven’t started on your 2022 goals yet, know that’s ok, because I haven’t either! So let’s start them together and get our bodies movin’! What are some of your goals for this year? Let me know in the comments! And remember, a little bit often is all it takes.”

Luckily, fans will have much more Brie Larson to look forward to in the near future than just these exercise updates. The actress will be reprising her role as Captain Marvel for the upcoming MCU film The Marvels, and it’s expected that she’ll have further appearances as well.