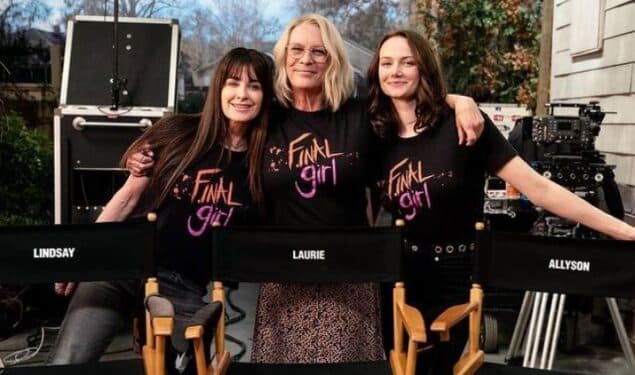 With the upcoming horror film sequel Halloween Ends currently in production, there have been a variety of exciting glimpses released so far. One newly released image includes a set photo with Jamie Lee Curtis, Andi Matichak, and Kyle Richards. The three cast members are reprising their roles as Laurie Strode, Allyson Strode, and Lindsey Wallace. And, appropriate for the Halloween Ends occasion, they’re all three wearing shirts with “Final Girl” on the front.

The image, which was released via Jamie Lee Curtis’s Instagram account, was followed by another image with a book titled “The Final Girl Support Group.” It’s equally appropriate, considering that all three actresses have been considered final girls throughout the Halloween franchise. Of course, it remains to be seen whether or not they will manage to survive this outing. As such, these Halloween Ends stars might not remain members of the Final Girl Support Group after all. Fans will have to wait for the release of the upcoming film just to be sure.

The photos also included the below caption:

“Well IT’S OFFICIAL! We must have all read this book because at this moment…we are still HERE and FINAL but come OCTOBER all bets are OFF!”

Meanwhile, fans still have Halloween Ends to look forward to. David Gordon Green will once again return to direct Halloween Ends, the upcoming sequel to its predecessors Halloween and Halloween Kills.

Fans will be able to see Halloween Ends this year on October 14, 2022. With production on the highly anticipated horror film still underway, fans can stay tuned to ScreenGeek for updates on the project as we have them.