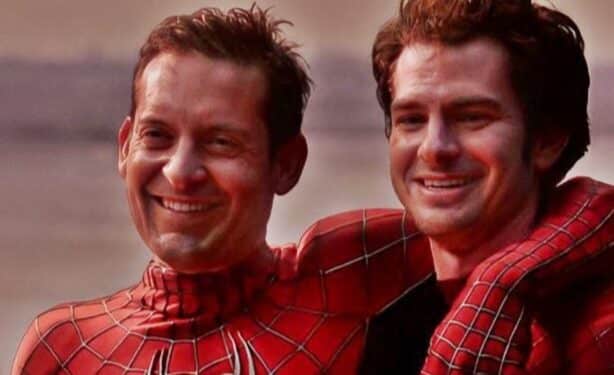 Spider-Man: No Way Home was packed with surprises throughout its runtime, and this included bringing together Tom Holland, Andrew Garfield, and Tobey Maguire as their respective versions of Spider-Man. It marked the first time that such a crossover got to occur in live-action for the Spider-Man franchise, and by the time the film was over, fans were already begging for more. While it’s unconfirmed if Andrew Garfield or Tobey Maguire will ever return to their roles, it seems like a deleted scene did tease such a reunion.

The scene was revealed in the many Spider-Man: No Way Home bonus features, via The Direct, and comes off as more of an alternate take. Specifically, it’s an alternate exchange of dialogue towards the end of the film that teases the possible return of Andrew Maguire and Tobey Maguire. As fans know in the final film, there’s a line from Tom Holland where he says, “I guess I’ll see you,” before his fellow Peter Parkers leave.

While it leaves the door open, it’s still a very ambiguous line. In the alternate take, however, it seems like Andrew Garfield gave a more definitive response to tease his and Tobey Maguire’s return. Of course, it’s possible the actor was just improvising in the moment.

Here’s how the exchange of dialogue goes in that deleted scene:

Garfield’s Spider-Man: “You know where to find us.”

Indeed, Tom Holland’s Spider-Man does indeed know where to find his other two counterparts. As such, it seems likely that there could be another possible crossover at some point in the future. Of course, fans will have to just wait and see what happens. In the meantime, No Way Home is already a surprise that fans once thought would never be possible.

Fans will be able to view Spider-Man: No Way Home digitally on March 22, 2022. The physical release which includes 4K UHD, Blu-ray, and DVD copies of the film, will be released on April 12, 2022.