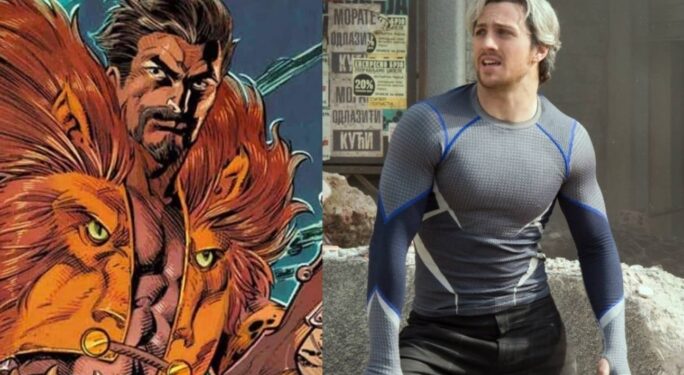 With the success of so many Spider-Man films and related spin-offs like Spider-Man: No Way Home, Venom, Venom: Let There Be Carnage, Sony is hard at work with further expanding their franchise. They not only have Morbius on the way in April, but they’re currently in production on Kraven the Hunter – a solo-film based on the titular Spider-Man villain of the same name. The project has been in development for several years now, but it’s finally getting underway and fans are excited. Now there’s a new reason to get excited, as the possible first look at star Aaron Taylor-Johnson as Kraven has been revealed.

It’s worth noting that the image was taken on the set of the film, and as such it’s not of the highest quality. However, it is still exciting to even get a potential glimpse of Aaron Taylor-Johnson on the set of the film, especially since we haven’t seen what his interpretation of Kraven will look like as of yet. This should give fans somewhat of an idea, and at this rate, we’ll likely have better looks at Aaron Taylor-Johnson in the role soon.

Furthermore, a set video and production sheet were also revealed from the shoot in London.

Production sheet for Kraven the Hunter (under the name Spiral)

While Sony is often great at keeping secrets, it seems like Kraven the Hunter might not be one of them. In which case, fans can stay tuned to ScreenGeek for more updates on Kraven the Hunter as we have them. It’s definitely going to be a great time to be a fan of the character.

J.C. Chandor is directing the film from a screenplay by Art Marcum & Matt Holloway and Richard Wenk. The film will be produced by Avi Arad and Matt Tolmach.

Audiences will be able to see Kraven the Hunter when it hits theaters early next year, on January 13, 2023.