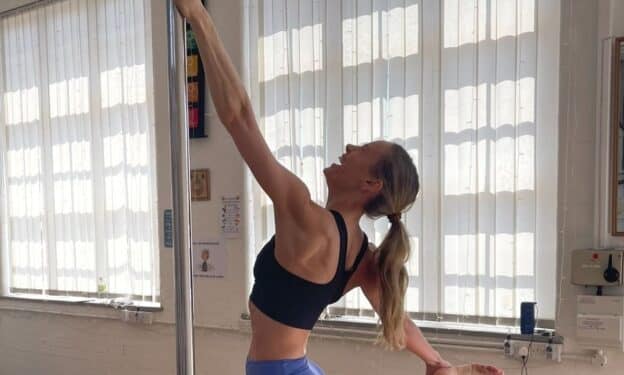 With a career that’s constantly growing, Brie Larson has been doing a great job at keeping fans up to date on social media. This includes new photos and videos of her various exercise routines. Now Larson has shown fans her newest workout of choice – pole dancing.

She also revealed the photos with a rather appropriate albeit cheesy pun. The caption that Brie Larson chose to write for the occasion reads as the following:

Obviously, this workout class is designed to teach Brie Larson pole dancing. And, if the below photos are any indication, she’s done a great job so far:

Made an im-POLE-sive decision to try a new workout class pic.twitter.com/JueKEEhITp

There isn’t much else to share, though it does a great job at showing how diverse Brie Larson’s various workout routines are. The actress was previously sharing her different exercises while staying in shape for her role as Captain Marvel in the upcoming film The Marvels. But with different projects like the Fast & Furious sequel Fast 10 on the way, she’ll have plenty of other projects worth staying in shape for. As such, fans can likely expect plenty of other surprising and exciting workout updates from Brie Larson in the near future.

If you’re more interested in her big screen appearances, however, then you won’t have much longer to wait. The Marvel Cinematic Universe film The Marvels will be released next year on July 28, 2023. This particular film will act as a continuation to both Brie Larson’s film Captain Marvel as well as the upcoming Disney Plus series Ms. Marvel starring Iman Vellani as Kamala Khan. The two characters will be coming together for The Marvels which should be an exciting new addition to the MCU. Hopefully we’ll have more details on those upcoming Marvel Cinematic Universe projects in the near future as well.