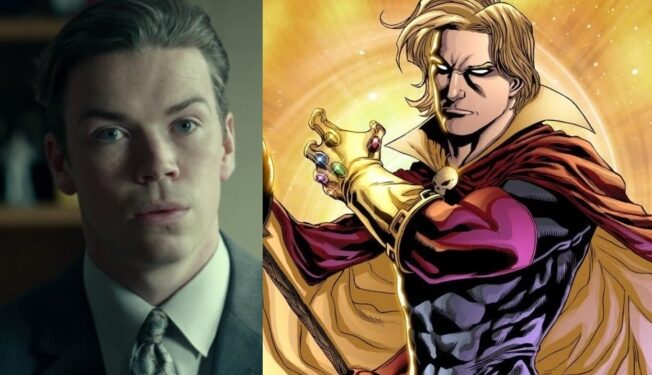 Fans have plenty of reasons to be excited for Guardians of the Galaxy Vol 3. It’s been quite a few years since the last Guardians film was released, and although we’ve seen the group return for the Avengers films, it’ll definitely be nice to see them in a proper third outing. As such, we’ll also be seeing plenty of new characters introduced, including a new Guardian – Adam Warlock. The fan-favorite comic book character Adam Warlock will be brought to life on the big screen by actor Will Poulter.

Now, as you can see below, Will Poulter has shared a new look at his Adam Warlock physique. It’s obviously not easy adapting such an iconic character for live-action. But with an actor like Will Poulter attached to the role, he’ll no doubt bring something exciting to the character that fans will love. As for now, we can see his dedication to building muscle for the role as he mimics the pose of a nearby statue.

Check it out in the images below:

Guardians of the Galaxy Volume 3 star, Will Poulter via Instagram. pic.twitter.com/SEOUkQSmvE

📸 Will Poulter in Ibiza via IG pic.twitter.com/TXKaEXr2sm

While it isn’t an official look at his character, it is great to see he’s dedicated to looking the part. With the film scheduled to be released next year, we’ll hopefully have additional glimpses at the project in the near future. As such, fans can stay tuned to ScreenGeek for updates as we have them. In the meantime, we’ll be seeing the Guardians of the Galaxy return first in Thor: Love and Thunder for what’s presumably a small appearance on July 8, 2022.

Original Guardians of the Galaxy and Guardians of the Galaxy Vol 2 director James Gunn returned to direct this third installment. The cast for the upcoming film features Chris Pratt, Zoe Saldana, Dave Bautista, Karen Gillan, Pom Klementieff, and the voice talents of Bradley Cooper and Vin Diesel. Will Poulter is joining the cast as Adam Warlock.