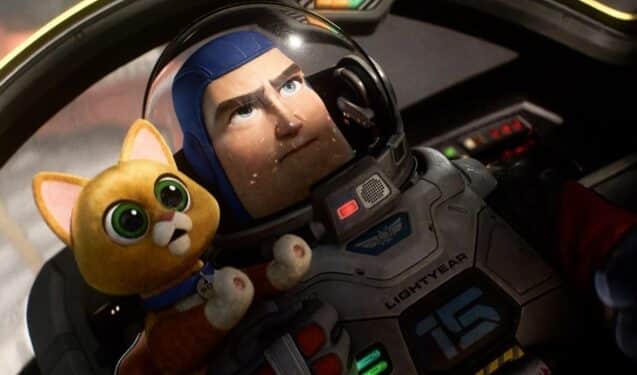 The newly-released Pixar film Lightyear was distributed to theaters with a same-sex kiss scene intact. The film was banned from certain countries as a result. With that in mind, it looks like there are still some individuals in the United States that are similarly upset.

In particular, an Oklahoma theater has issued a warning regarding the kiss scene in Lightyear. They also revealed that they planned to fast-forward the scene throughout their showings.

The sign regarding Lightyear, which was brought to the attention of the public via NBC, was issued by the 89er Theatre located in Kingfisher, Oklahoma. 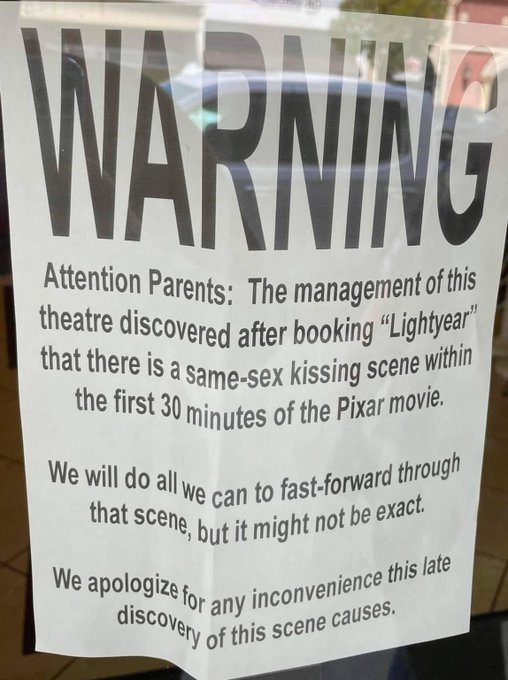 Here’s what was written on part of the sign:

“Attention Parents: The management of this theatre discovered after booking ‘Lightyear’ that there is a same-sex kissing scene within the first 30 minutes of the Pixar movie. We will do all we can to fast-forward through that scene, but it might not be exact.”

According to CNN, the theater has responded, saying:

“The management of this theatre discovered after booking ‘Lightyear’ that there is a same-sex kissing scene within the first 30 minutes of the Pixar movie,” the sign read. “We will do all we can to fast forward through that scene, but it might not be exact.”

“It was an internal mistake and it’s been corrected. It won’t happen again.”

One resident was upset by the sign after realizing it wasn’t a joke. Here’s what she, Patricia Kasbek, 42, had to say:

“I told them that it was completely insulting for them to censor a same-gender kiss when they’ve never done this to an opposite-gender kiss,” Kasbek said, calling the sign “cruel” and “bigoted.” “I will never see a movie at this theater while under this ownership.”

Similarly, other members of the LGBTQ+ community in Oklahoma have expressed their disappointment with the theater. For example, gay former 89er Theatre employee Eric Ogilvie, had his own thoughts on the matter.

“I just knew growing up in Kingfisher that it wasn’t really OK to be gay and that you’re going to be treated differently,” he said. “I loved my job at the theater, but for them to come out and put a sign on their door … why not just send the movie back or rescind the contract and not post something for everyone to see?”

“Don’t let other people define you. You know, it’s tough at the moment, but things will get better. You’ll find people who accept and love you for who you are.”

The new movie was directed by Angus MacLane. Chris Evans voices the character Buzz Lightyear, the toy version of which was voiced by Tim Allen in the original Toy Story films.