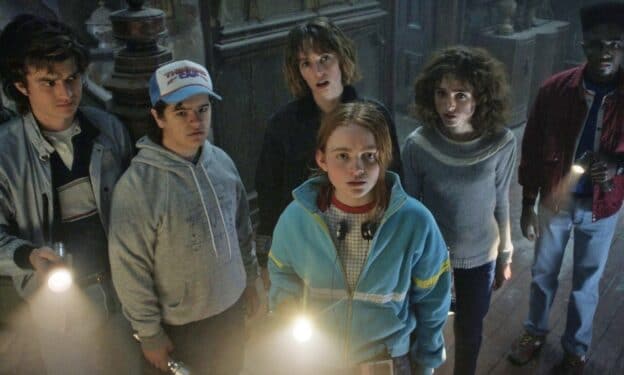 It’s no surprise at this point that the newest season of Stranger Things has been the darkest yet. Many of our main characters are harmed in ways they haven’t been before, and one even died temporarily. With that said, it looks like things could have been much darker, as the Duffer Brothers have revealed they originally intended to kill off a major character. Now they’ve opened up about the alternate ending for Stranger Things 4.

As discussed in a new interview with Netflix Geeked, Ross Duffer explained Max was originally going to have died completely. This alternate ending for Stranger Things 4 would have no doubt been a much more devastating outcome by the end of the season.

Ultimately, however, they decided it would be best to go the route they chose.

Here’s how he explained it:

“[Max’s death] was discussed as a possibility. For a while that is what was gonna happen,” Ross began. “We wanted to end it in a little bit more of a question mark at the end of the season where it’s still really dark and we don’t know if Max is going to be OK… We don’t really know. We wanted to leave it up in the air moving forward into Season 5.”

Meanwhile, Matt Duffer explained that this season was always intended to be much darker than previous entries. They really wanted it to feel like our main characters lost by the end.

“This season, we always wanted our [Star Wars] Empire Strikes Back season,” Matt Duffer explained. “We tried it a little bit with 3, but this is really doubling down on that idea of — at least 3 has a sad note, there’s a sacrifice, but they’ve defeated the evil, or at least pushed it back for a while. Whereas with this, we wanted them to actually lose. We wanted our characters to experience what that felt like.”

It all leads into the fifth and final season of the series where our characters head into the last confrontation with Vecna and the Upside Down.

“That was the big idea coming into 4, that they were gonna lose and we’re gonna introduce Vecna, and they’re gonna lose to him. That would be setting our characters up for what is gonna be the ultimate final confrontation with Vecna, with the Upside Down, which is going to be Season 5.”

As such, it makes sense that they originally wanted Max to die completely like Vecna’s other three victims. Either way, even with her survival, the season still ends on an incredibly dark note. Max is still in a near-death state, the Upside Down seems to have merged with the normal world, and we did see the death of beloved character Eddie Munson. It really will be interesting to see where the fifth season of the series goes next. As such, fans can stay tuned to ScreenGeek for updates on Stranger Things 5 as we have them – and any other tidbits regarding the latest season to be released on Netflix.

All four seasons of Stranger Things are currently available to stream on Netflix.