‘Madame Web’ Plot Is Reportedly Similar To ‘The Terminator’ 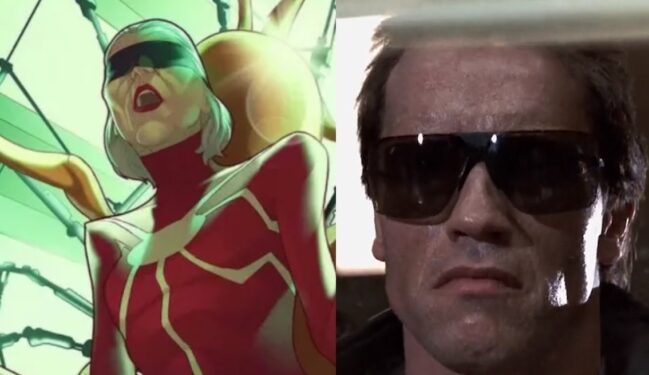 Fans have been anxiously waiting to figure out which direction Sony’s Madame Web film is going to take. After all, the titular psychic character allows for any number of exciting plot possibilities. As it turns out, however, Madame Web will mostly be resembling a little film from 1984 called The Terminator. The film’s low budget was balanced with an incredibly simple yet compelling story. Sarah Connor, a woman destined to give birth to humanity’s savior, needs to be protected from a cyborg assassin sent from the future.

Interestingly enough, it looks like Madame Web will be following a much similar plot. Instead of Sarah Connor, however, the pregnant woman in need of protection is none other than Mary Parker. This woman must survive in order to give birth to Peter Parker, otherwise he’ll never have the chance to become Spider-Man. Of course, this is still just a rumor, so be sure to take it with a grain of salt.

As further noted by the rumor, however, Mary Parker will be played by none other than Emma Roberts. We’ve already seen set photos which appear to show Emma Roberts playing a pregnant character. So, as of this writing, it certainly all adds up that Madame Web will be similar to The Terminator.

Hopefully we’ll have more concrete details soon as production continues. Until then, however, we’ll have to wait and see what happens. Stay tuned to ScreenGeek for updates as we have them.
The film is being directed by S.J. Clarkson from a screenplay by Matt Sazama and Burk Sharpless. Kerem Sanga wrote an earlier draft of the script.
The surprisingly massive cast of Madame Web includes Dakota Johnson, Sydney Sweeney, Celeste O’Connor, Isabela Merced, Emma Roberts, Adam Scott, and Tahar Rahim. Fans can stay tuned to ScreenGeek for additional cast updates as we have them. At this rate, it’ll be exciting to see who else could be added to the growing ensemble.
Fans will be able to see Madame Web when it hits theaters next year on July 7, 2023.