‘The Black Phone’ Was Changed To Be Less Like ‘IT’ 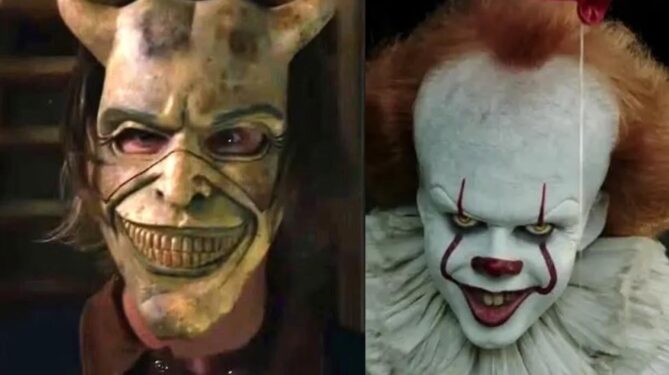 Many horror fans recently went out of their way to see Scott Derrickson’s new horror feature The Black Phone. The coming-of-age supernatural horror film was based on a 2004 short story from author Joe Hill. As it so happens, Joe Hill is the son of fellow author Stephen King, and had to make a few changes to make The Black Phone less like his father’s iconic novel IT.

This was revealed by Joe Hill himself while speaking with ScreenRant. He explained that Ethan Hawke’s character, The Grabber, was originally a clown in the 2004 short story. Furthermore, The Grabber continued to consider himself a part-time clown in the film’s first screenplay. But on the cusp of Stephen King’s IT getting a brand-new adaptation in 2017, Joe Hill finally recognized the similarities, and chose to alter the screenplay as a result.

As such, The Grabber was made into a magician instead.

Here’s what Joe Hill had to say on the matter:

“I had one big creative contribution, which is — I don’t know if we want to get down in the weeds. I had one big creative contribution, which was when I read the first draft, it was very, very faithful to the story and, in the short story, when Finney is kidnapped by The Grabber, the guy introduces himself as a part-time clown. He still was a part-time clown in the film, in the screenplay, which was kind of a natural evolution, because the character somewhat echoes the crimes of John Wayne Gacy. But I read the script and, I can’t remember if IT had come out at that point or was just about to come out, and I said, ‘Guys, I don’t think he can be a part-time clown, not with Pennywise about to explode on the American consciousness. I just think there’s room for only one deadly clown. So what if we made him a part-time magician instead?’ I sort of had some stuff to share with them about a whole bunch of magician acts in the 1920s and ’30s that featured the magician fighting the devil, and the magician would actually play both parts. He would come out wearing a devil mask and do evil sorcery and then he’d come out as the heroic magician to fight back. I said, ‘We could do something based on that and what a devil could, if we’ve got some devil imagery that could be pretty scary, as scary as a frightening clown.’ That said, I couldn’t have, in my wildest dreams, anticipated how iconic Tom Savini and Jason Baker’s mask for The Grabber would be. That is a really extraordinary image and I think is a big part of why the film was such an instant hit. People look at that mask and it’s iconic the way Freddy Krueger’s glove is iconic, the way that Michael Myers’ mask is iconic. That thing was crafted to haunt your sleep at 2 a.m.”

Indeed, this evolution for The Grabber helped create an iconic look for the character. It also allowed The Grabber to stand on his own as opposed to being yet another murderous clown. With the way the film has been considered a success among audiences and horror fans, it’s safe to say that their decision worked for the best. Furthermore, it’s interesting to know the behind-the-scenes details that went into making the film how it ultimately turned out. It goes to show that sometimes straying away from the source material can be a good thing. Especially when translating something to the big screen or modernizing it for moviegoers.

The newly-released horror film The Black Phone is now available on digital platforms and to own on Blu-ray and DVD.