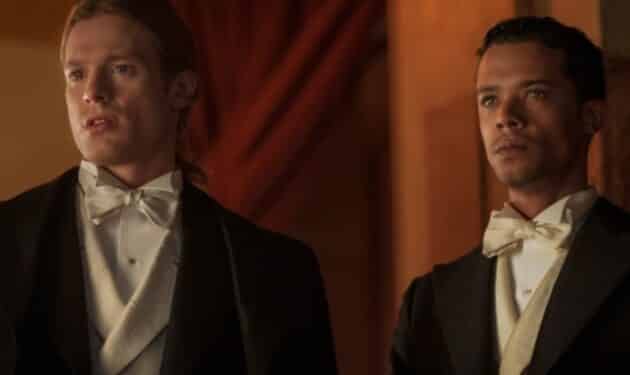 Anne Rice‘s Interview with the Vampire has been a cultural phenomenon for decades. The 1994 film starring Brad Pitt, Christian Slater, Tom Cruise, and Kirsten Dunst widened the acknowledgment of Anne Rice’s work and cemented The Vampire Chronicles‘ legacy. Though some would argue that the ’94 film didn’t do the books justice, a level of fandom still washes over Neil Jordan’s classic movie. I would watch the film when it appeared on cable or whatever local channel where my view eyes were hungry for entertainment.

The story of Louis, Lestat, and Claudia resonates with many people today. Finally, AMC Studios has seen an opportunity to bring these characters back to the screen. The show Interview with the Vampire will premiere on October 2nd on AMC, and fans have eagerly awaited this new adaptation. At this year’s San Diego Comic-Con, the cast and creative minds behind the show were present at this year’s event.

Fortunately for you readers, ScreenGeek was there to speak with Jacob Anderson, Sam Reid, Kalyne Coleman, and Eric Bogosian.

The book is widely popular and has a strong fanbase. However, many are more familiar with the 1994 movie, starring Brad Pitt, Tom Cruise, and Kirsten Dunst. Have you watched the movie before filming and learned ways to make your characters unique?

Jacob Anderson: No, and I’m not saying that in a shady way. But, no, it’s a great movie I saw as a teenager. I was kind of tempted to watch it before we started shooting if I’m honest, but I didn’t want it to be a response to that. I feel like we had so much already there to look at and get nutrients from.

Sam Reid: I love the movie and did love it when it came out. I did see it again recently before I auditioned, not just by chance. I think it exists in its own world and should exist in its own world. Cause it’s a great adaptation of, of the first book. We’re entirely different. We’re our own film as well. I think the source material is so rich and has so much potential that there should be adaptations. There are multiple adaptations of what we get to do.

The original film—firstly—was queer coded, and we’re not that in any way, shape or form. And secondly, we bring in the whole universe. We bring in all of the books. We’re talking about stuff that they didn’t really get to touch on.  They’re very separate. I love what they did, and I love what the actors did in it as well. I try not to think about it too much cause it’s very, very daunting.

Kalyne Coleman: I watched movies when I was auditioning cause it’s the fastest way I can understand what Interview with the Vampire was and is. I just love seeing how awesome Claudia is, and it made me more excited to play this role. Then when I looked at it, and it really is a dream role, we get to expand on how many emotions she actually feels. She’s stuck in this younger body, and her brain never develops. We say that the prefrontal cortex doesn’t set until you are 25, which makes decisions. She doesn’t have that. It’s never going to develop fully. So she’s always going to act on feeling first, and we really, because it’s a show, get to expand on that more because she feels so deeply.

Rolin Jones: I’m pretty sure there’s going to be a drinking game based on taking Molloy his classes on and off for our series.

Check out AMC’s Interview with the Vampire when it premieres Friday, October 2nd.