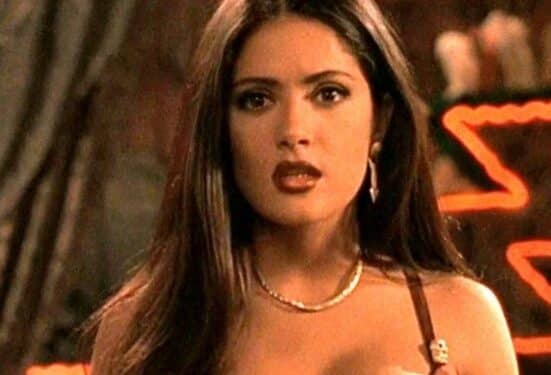 With a number of iconic appearances over the decades, it goes without saying that Salma Hayek is a fan-favorite Hollywood star. Of course, even now in 2022, she remains as beautiful as ever. And, naturally, Salma Hayek is well-aware of this – often posting gorgeous photos of herself on social media and the occasional video where fans can see she still has her From Dusk till Dawn-level dancing skills. Now, as shared below, Salma Hayek has taken the opportunity to show off her black see-through top that’s been getting plenty of traction on the social media platform.

As revealed in the tags of the post, it appears that the outfit Salma Hayek chose to wear comes from none other than Spanish high fashion house Balenciaga SA. Furthermore, her makeup seems to have been done by Angloma with hair styled by Jennifer Yepez.

Regarding the location of where the photos were taken, it appears to be a dressing room although details beyond that are unknown. Still, though, Hayek makes the best of the space – looking stunning in a number of different poses and certain photos where she’s pictured with sunglasses and without.

Here are the photos where Salma Hayek shows off her black see-through top:

With these photos in mind, of course, Salma Hayek could probably look great in any kind of outfit. Nevertheless, with clothing from Balenciaga SA, she seems just as cool as ever before. One can’t help but joke that perhaps she’s a vampire just like her character from the aforementioned hit From Dusk till Dawn. Then again, she also played an ageless muse in Dogma and one of the titular characters in Eternals. Perhaps it’s fitting, then, that she seems to have a knack for playing immortal and beautiful characters.

Fans can stay tuned to ScreenGeek for any additional updates on Salma Hayek as we have them. As for now, fans will soon be able to see her voice iconic character Kitty Softpaws alongside Antonio Banderas’ Puss in Boots in the upcoming film Puss in Boots: The Last Wish.