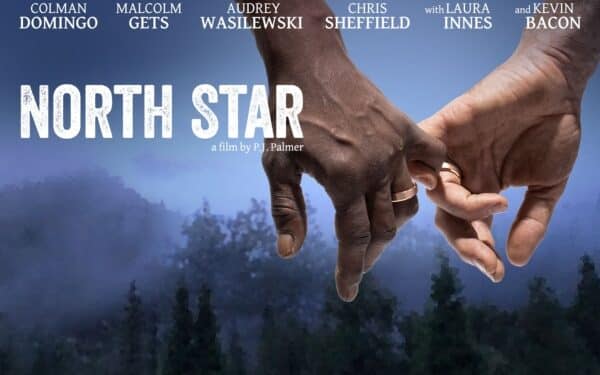 With every big blockbuster film, sci-fi epic, or laugh-out-loud comedy, there are a ton of emotionally charged movies out there that are buzzing around Hollywood. But, more interestingly enough, many short films have tapped into the poignant market that screams potential from future prominent named filmmakers. One such film called North Star, spearheaded by upcoming director P.J Palmer has been making waves in the film festival market.

His story of a loving couple going through harsh times is easily relatable. Starring Colman Domingo and Malcolm Gets ripe for interest among audiences regarding caring for sick loved ones, making sacrifices, and doing what’s right by your life partner. In this part one of a two-part article, we got to talk to Palmer about his filmmaking process, working with legendary award actors, and what jump-started his idea for North Star.

Where did the idea for the North Star come from?

P.J. Palmer: For North Star, the initial idea came from knowing some people who had a similar situation. A couple was — she had a really bad stroke, and she never walked again. She never talked again. Her husband, who was the rancher, took care of her. The part that really got me was they had the resources to move to town. We lived in a very rural area in the mountains where his ranch was. He could’ve sold the house or not.

He probably could’ve just kept the house and moved her to town and stuff. But he didn’t. He kept her home, where they raised her children, and where he knew she would want to be, and he didn’t even hire help. He could’ve, but he didn’t. So he sort of had to give up his outdoor life to become this domestic person.

Do all the laundry, the dishes, her bathing, and the ironing. All the things that happened inside of the house; were completely her domain up until that happened. I always just thought that he was her north star. She knew her husband had her back in a way I hadn’t seen before. So that’s what started it. I was just really moved and inspired by their story. I know them.

They’re friends of mine. So I think it was a way of me processing what was happening with them, was write a story about it. But then I put it away for many years. It got put away for five or six years, and I didn’t do anything with it.

After the 2016 election, I felt — well, I knew that the Supreme Court would change dramatically. Rights would be stripped away. I knew that because in the world I grew up in–this sort of evangelical Pentecostal world. That was the mission for 40 years of overturning Roe versus Wade and everything. They’d been trying this for years, and I saw it a little bit when Sarah Palin was the nominee for vice president in 2008.

Then in 2016, when it went the way it went, I just knew we’d lose the Supreme Court. Our lives would change, and here we are. So I knew that going into it. I felt like I needed to add myself to the story. So I added my partner and me as characters reflected as we’re saying gendered and we’re multicultural.

He’s black; I’m white. So I told our story. I added our story to my friend’s story. I mean, my partner’s not ill; I’m not ill. But all the other issues in the film besides health came from our story. The things that the sister says, or the things that are said on the television, or things we’ve both been told to our faces. We’ve heard these things from family, and mostly.

So, this was my way of sort of processing all that; adding myself into the story in a way that felt very vulnerable to me. I was really afraid to do it. It’s weird to be vulnerable in public.

I had the same mindset during the 2016 election when Trump was elected. Unfortunately, I’m screaming from the hilltop that things will go downhill in the next four years.

P.J. Palmer: It’s funny; I ended up in the hospital. Isn’t that crazy? It’s so overdramatic. After the election, I didn’t realize that people very close to me voted for him. And when I heard that, I was so broken-hearted that they would’ve done that. Cause it felt like a weird betrayal. It felt like, “I know these people very well, and he’s everything they are against.”

It felt so hypocritical. “I know who you are, and I know what you stand for.” I know everything you’ve said, even politically and about politicians. He’s a monster.” I just couldn’t believe it. It threw me so hard. I ended up in the hospital. I had a panic attack, or I didn’t know if I was having a heart attack. It was just the stress of it.

Not that I was afraid for a country and like, “Oh, I’m having a heart attack because I think the constitution’s under attack.” That just makes me angry. It makes me wanna fight, which is why I wrote the story. That’s how I’ll fight. I’ll write stories. It was the betrayal of people I love having gone down that road. I just couldn’t “square that circle.” It turned the world upside down. My entire world got, you know?

Yeah. Many people started showing their true colors about that kind of stuff, even within my family. My mom’s side of the family is predominantly black. Yet, I’m hearing family members say, “Trump’s gonna clean this country up of the Mexicans,” and all that stuff. So some fights did happen between myself and them.

P.J. Palmer: Yeah. I think true colors did come out. That’s the other thing. They came out pretty quickly; after that, I started hearing. A lot of what Erin says in the movie — the sister — was said over the few years I was writing it and trying to make the movie. I kept having these conversations with family, and weird shit would be said. I’m like, “Oh, that’s going into the script. I gotta put that in the script.”

I think people understand when you hear how she speaks like that — you can’t make that shit up. You just can’t make it up. But, also, I think it’s this cognitive dissonance where they can’t see the forest for the trees. I don’t think that they think they’re being hypocritical. I don’t think they think that, but it’s so blatant. “Just look at yourselves; look at what you’re supporting. This man’s all monster.”

North Star is close to 30 minutes. Was North Star always intended to be a short film, or did you try to make it into a feature at one point?

*PJ and I share a good laugh at time frame details*

P.J. Palmer: So it’s six frames under 30 minutes. No, I never intended it to be a long movie. When I first wrote the script, even before I put my kind of story into it, it was also sort of a writing exercise. I was trying to see how many stories I could pack into 20 pages. It was just almost a game I played with myself as an exercise on how to write. So I was really trying to figure out how to tell a really good story in only 20 pages.

But my first movie cut was 45 minutes, which is ridiculous. So we cut a lot of scenes out that I shot. So there’s a bunch of stuff we shot that you didn’t see — scenes and sequences. I had always intended to be a short film — long-ish short. I didn’t know where it would land, but it landed at 30.

Yeah. And it hits this mark within the time we get from North Star. There’s a lot of character history just with the interaction between Colman Domingo’s character and Malcolm Gets’s character.

P.J. Palmer: Yeah, they definitely played it really well. I think together, that feeling of they’ve been through it, and the script doesn’t say that. The movie doesn’t say why they live out in those mountains. I’ve always thought they went there to get away from something. And look, people can go live in the mountains not to get away.

They can just go there to live. But in my mind, these two characters probably had enough of whatever was happening in their lives and got away. I think it’s reflected in the way that Erin talks about them being up here in this “Godforsaken mountain” and him running away from things. So yeah. I guess I do imply it in the script by what she says.

Please come back later for part two of our chat with director P.J. Palmer about North Star. Also, check out the short film whenever it becomes available for general audiences.