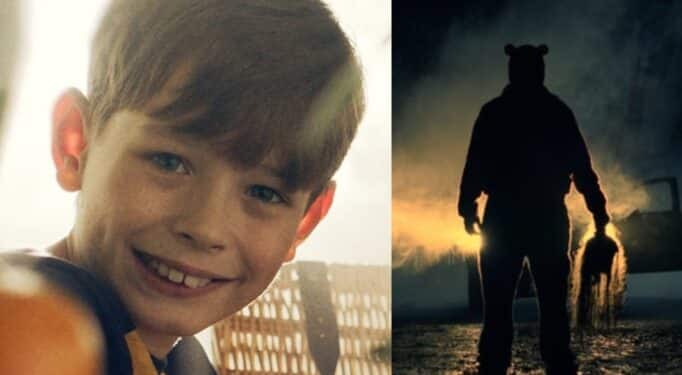 As shared via IGN, in addition to Christopher Robin, the new Winnie the Pooh: Blood and Honey images also reveal some fantastic looks at the film’s villains. This includes a shot of Pooh standing in front of a fiery blaze that should give certain shots from Halloween Kills a run for their money.

Here are the images including the new look at Christopher Robin:

New images for the ‘Winnie The Pooh’ horror film ‘WINNIE THE POOH: BLOOD AND HONEY’.

crop=16%3A9&width=888″ alt=”Exclusive new images from Winnie-the-Pooh: Blood and Honey. The horrific take on the classic children’s story will be out February 15 in theaters in the U.S., U.K., Canada, and Mexico.” />

EXCLUSIVE: We have four brand-new images from Winnie the Pooh: Blood and Honey, the upcoming slasher film set in the Hundred Acre Wood, including the first reveal of Christopher Robin! https://t.co/VcS9Tgse5T pic.twitter.com/fjioVsBR7y

It’s certainly interesting getting to see our first look at Christopher Robin in the film. It appears that the film’s “story is a sort of twisted version of Toy Story 3,” and that both Pooh and Piglet end up “going feral in the Hundred Acre Wood after Christopher Robin goes to college.” As such, the image with Christopher Robin we see here appears to be a flashback sequence. It’ll certainly be exciting seeing what will happen regarding the rest of the film’s narrative. These absolutely are not the friendly stuffed pals that fans will remember from the original storybook.

Rhys Frake-Waterfield both wrote and directed the horror film from a screenplay inspired from the public domain characters created by A.A. Milne.

Fans can look forward to seeing Winnie the Pooh: Blood and Honey in theaters for a special one-day event on February 15, 2023. Stay tuned to ScreenGeek for any additional updates on the highly-anticipated horror film as we have them.