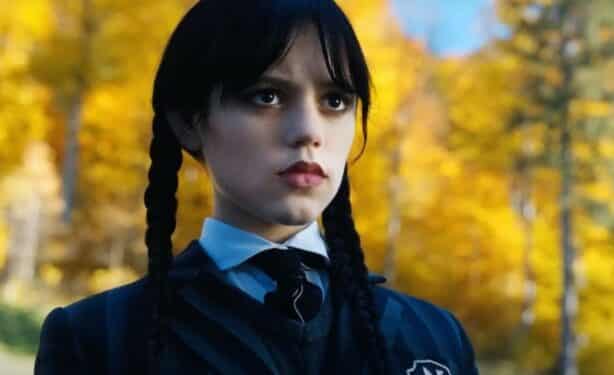 The new Netflix series Wednesday was created by Alfred Gough and Miles Millar, with filmmaker Tim Burton directing four of its eight episodes. Now Tim Burton is facing backlash for what some viewers feel is a clear case of racism.

In particular, users are disappointed that two of the black characters in the series happen to be depicted as bullies.

Here’s what some users have been saying on the matter:

WEDNESDAY: I really wanted to like it but I think it’s unforgivable that all the black characters are either bullies or morally compromised. And why is Wednesday hostile towards them? Wtf. What kind of ridiculous writing is this?

Anyone else bothered that the token black kids in #Wednesday are basically king and queen bully?

Tim, this is not how you do inclusivity. #TimBurtonIsARacist

Wednesday On Netflix I have a question. Ep 1

1. Black girl is the bully of the school.

Interestingly, another user made references to Tim Burton’s use of a black villain in Miss Peregrine’s Home for Peculiar Children.

Ohhh! I forgot! Wednesday is directed by Tim Burton! He’s admitted to believing black people don’t “fit his vision” or some shit. He’s known for making evil or unlikable characters black. He is admittedly racist. That explains a lot!

This came up when he did miss peregrine. I believe he white washed the entire cast of the original book & then inserted an evil black character that didn’t originally exist. This is a quote from Tim Burton on diversity. https://t.co/siZrdCwfCK pic.twitter.com/Nqk7MCxDdS

Oof, I see he is doing the classic white supremacist tactic of using an adjective as a noun when he chooses not to say “a Black child” but “a black”. It’s saying “black” like it’s a two syllable n-word.

I see it all the time for other minorities, too, all with a similar intent.

Tim Burton seen us call him racist and said “Here nigga, damn” by putting ONE black girl on “Wednesday” then he made her the villain 😭😭😭

Wait the Wednesday show is directed by that racist weirdo who thinks he’s an outcast because he likes everything black except for black people?

Me trying to badly to push pass the racist and anti-Black undertones in the Wednesday Addams Netflix show. Like whoever thought making the Black man as the owner of a pilgrim amusement park is literally going to HELL. 😶🙃😬😒💁🏾‍♀️

Don’t get me wrong…I love Jenna Ortega and that she’s playing Wednesday but one thing I hate about this show is that why did they make ALL the black people in this show terrible people? Like how did Netflix see nothing wrong with this? I hate Tim Burton’s racist self.

Boycott Wednesday. watch Wendell and Wild. Make Tim Burton reflect on his dumbass racist “aesthetics”.
That is all 🙂

This specific character didn’t actually exist in the source material that was adapted for the film. As such, users feel like Tim Burton has been creating black characters for the sole purpose of villainizing their race. With that in mind, however, it’s worth noting that he didn’t actually write any of the episodes for Wednesday. While he undoubtedly had a creative hand in the series, it seems like the addition of black bullies likely came elsewhere. It’s also worth mentioning that these black characters also developed throughout the season, with one of them even assisting in stopping the main villain.

Furthermore, Wednesday has done an otherwise positive job of maintaining inclusivity. This includes emphasizing the Hispanic roots of Wednesday Addams and her family. Other users have felt similar, and even provided defenses for Tim Burton amidst the backlash.

While I do typically agree with this, i actually watched the whole season Bianca is a good person who was dealt a shitty hand in life and even helps in the fight against the colonisers. The Addams are Hispanic and Wednesday constantly calls out racism/discrimination.

Overall, though, fans seem to be happy with Wednesday as the series continues to do well on Netflix. As such, it’ll be interesting to see if these concerns might be more officially addressed in the future.

Fans can currently view the first season of Wednesday on Netflix. Stay tuned to ScreenGeek for additional updates on the series as we have them.