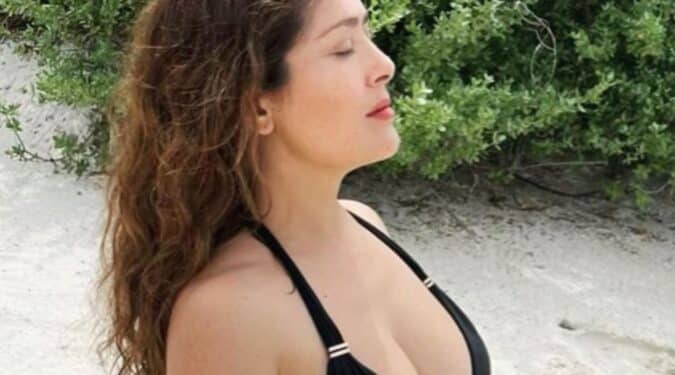 Fans love seeing beloved Hollywood star Salma Hayek on the big screen. Of course, it’s also been a pleasure seeing her real-life shared on social media. Now a new pair of photos have shown Salma Hayek enter a state of meditation while wearing nothing more than a bikini.

As for where the photos were taken, that remains unclear. But they certainly show off the scenic view that surrounds Hayek on all sides. With that in mind, it certainly isn’t difficult to imagine how easy it is for Salma Hayek to slip into her meditation.

At age 56, it appears that her meditation techniques must be doing wonders. Hayek has remained in gorgeous shape for decades and it’s only one reason why fans keep coming back to her social media posts. It’s almost enough to draw comparisons with her vampire character in the hit film From Dusk till Dawn. A few of her other iconic film roles include Serendipity in Dogma, Frida Kahlo in Frida, and an appearance as Ajak in Marvel’s Eternals.

Here are the photos:

Salma Hayek is quite active on social media. She’s shared more than her own fair share of bikini photos and videos from her day-to-day life.

As for recent projects, she starred as the voice Kitty Softpaws in the newly-released film Puss in Boots: The Last Wish. She also plays a role in the upcoming film Magic Mike’s Last Dance. Additionally, she’s attached to portray the main protagonist in an upcoming film adaptation of Seesaw Monster.

Fans can stay tuned to ScreenGeek for additional Salma Hayek updates as we have them. For now, however, these newly-surfaced photos are a stunning look at Hayek’s meditation techniques.