5 Reasons Why ‘Agent Carter’ Is Worth Your Time

Being based in the UK, I’ve only just finished watching the first season of Marvel’s ‘Agent Carter’, and I’m pleased to report that it managed to fulfill expectations.

Having voiced unwelcome displeasure with the show’s older cousin, ‘Agents of SHIELD’ in a previous article, I approached Carter with mild anxiety, a little concerned that it might be more ‘superfluous’ than ‘superhero’.

The results though, are satisfying enough, and the material gels comfortably with the preceding output from the studio. So here’s why if you haven’t bothered with a bit of Peggy Carter, you might well want to: It’s not without flaws, don’t get me wrong. The first couple of episodes are particularly slow-burners, with the SSR organisation and it’s staff portrayed as little more than a collection of misogynistic buffoons. The resultant temptation is to cash in and walk away, but ultimately it’s the format that keeps the show accessible.

Avoiding a ‘villain of the week’ cliche, the show chooses instead to pursue a much more focused individual storyline, which it is comfortably able to spread across the 8 episode run. This makes it more palatable than Agents of SHIELD, with less plot lines for the writers to try and juggle or squeeze in, and incentivising the audience to push through the weaker episodes to the end of the series. 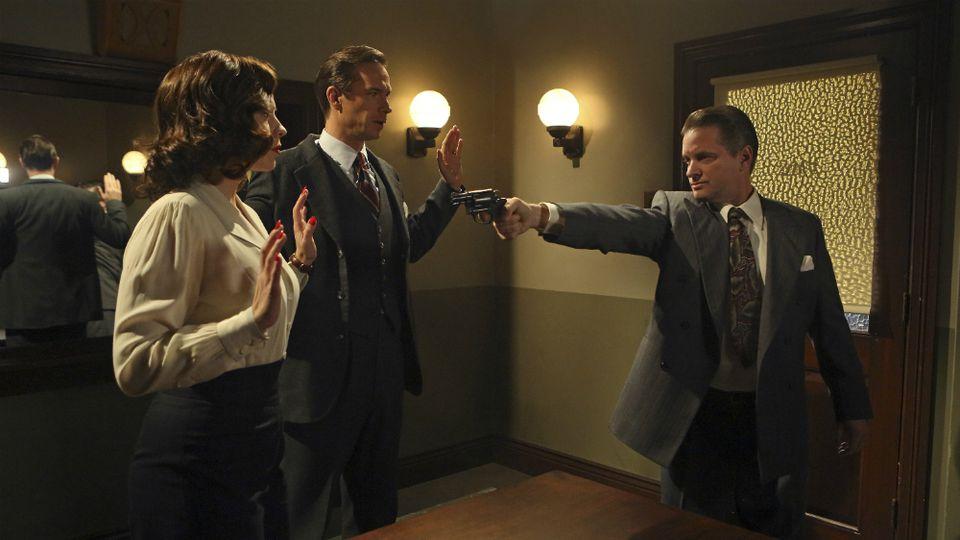 Whilst the supporting cast are initially presented as quite disposable, by the time the show gets round to disposing of them viewers are invested to the point where they actually care. The sudden and relatively unexpected execution of the first SSR Agent in Episode 3 marks a tonal shift for the series.These characters aren’t indestructible, there’s no magic alien DNA to bring anybody back. And the death of a key character in Episode 7 in quite brutal and dispassionate circumstances is quite heartfelt. Particularly as we’re just starting to warm to him. (Pardon the pun…)

The introduction of Jarvis is a clever move, tying the series to the Iron Man material we’re already familiar with. James D’Arcy’s portrayal of the character is well handled, channelling an undercurrent of vulnerability the writers have provided him with. Also of note are Enver Giokaj’s damaged Agent Souza, and a familiar grumpy turn from the dependable Shea Wigham as their Station Chief.

One of my main bugbears with SHIELD was the fact that lot of the characters had been made up from scratch, when comic material could have been retconned and used. There was also a distinct absence of cameos from existing Marvel Studio properties, barring the occasional drop-in from Lady Sif or Nick Fury.

Carter sets out its stall in Episode 1 by bringing the brilliant Dominic Cooper back for a recurring role as Howard Stark. Cooper not only provides the required level of textbook Stark charm, that SHIELD was sadly missing, but also adds genuine emotional weight to the closing stages, as Howard’s role as the architect for the circumstances becomes clear.

We also get appearances from fan favourites Dum Dum Dugan, and Arnim Zola, both of which not only strongly tie the series to the preceding Captain America film, but also into the future developments within the film universe, making the material relevant, rather than superfluous. 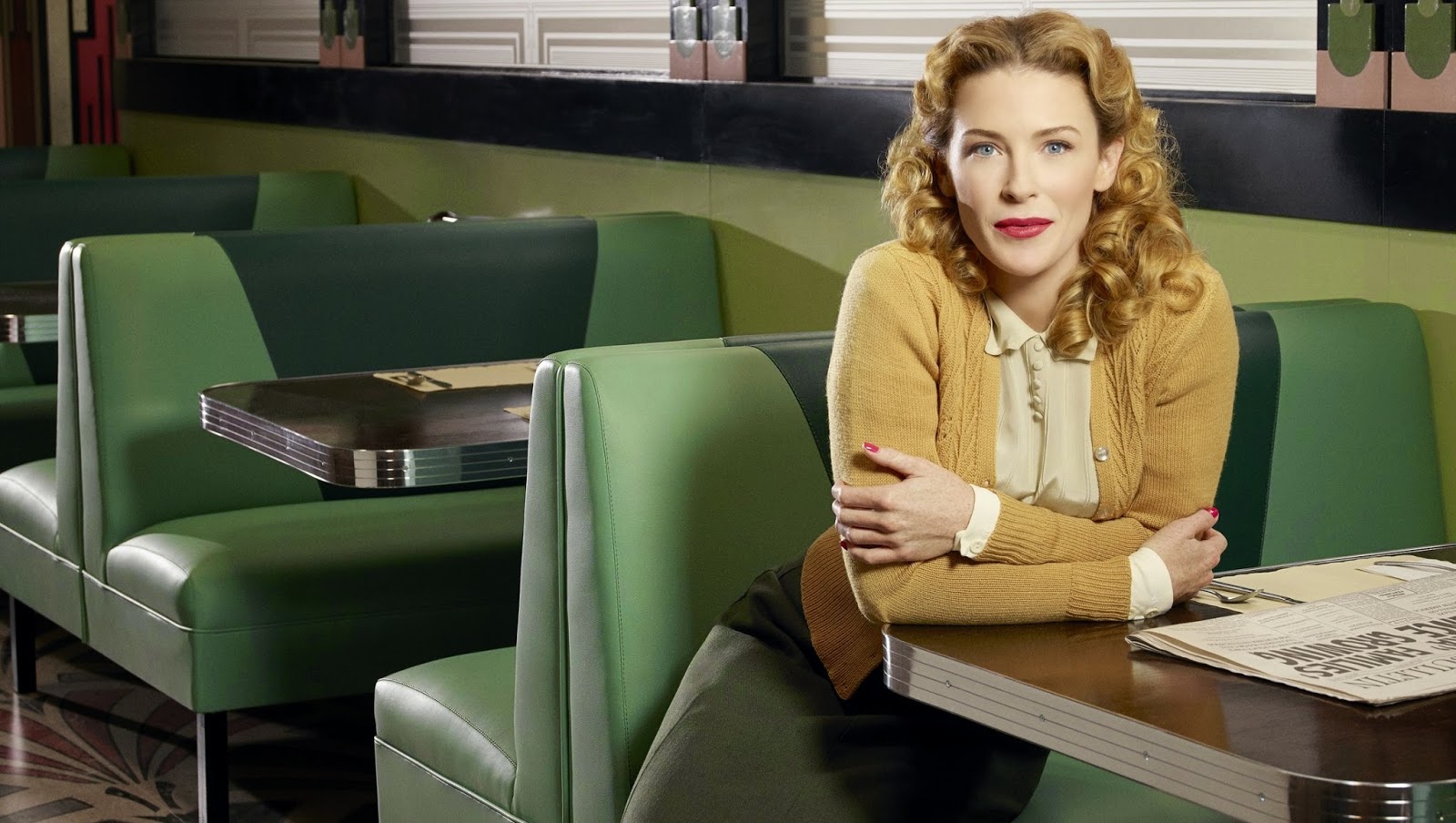 It’s refreshing to see that for once, Marvel have moved away from the humdrum and ham of Hydra. Hugo Weaving’s shouty and starey performance as the Red Skull was fine for an initial introduction to the genre, but is best left consigned to the constraints of the Cosmic Cube. And the subsequent repeated introduction of shadowy men in suits whispering ‘Hail Hydra’ to each other was neither particularly menacing or engaging.

The introduction of ‘Leviathan’ as the big bad in this series is a canny choice. It’s existing material from the comics, and is tactfully handled. The central villains are suitably teased in earlier episodes, but not overplayed. In fact, their actual identifies aren’t even uncovered until towards the end of the run, and seemingly come out of nowhere. Both are suitably menacing, with Dr Faustus a particular divisive and abhorrent introduction, his victims seemingly helpless to combat his gentle and reassuring methods. His assistant Dotty is portrayed with a cold detachment that makes her particularly repellant, in sharp contrast to the warmth that Hayley Attwell brings to the titular Carter. Female heroes have tended to struggle in the comic book genre to avoid stereotyping, and becoming judged on their physicality alone. One way in which the series combats this is to dispense with a love interest, which would have been an easy misstep. Whilst the heartbreak and loss Carter feels for Steve is referenced and built into the narrative, it’s not overplayed, with her character given room to develop and expand, rather than being tied in to her cinematic portrayal.

It’s also nice to see an attempt to keep the integration of technology at a grounded and believable level. There are no flying cars or ice guns for people to fall back on here. Business is settled with pistols, bombs, and the occasional chemical compound.

Flashbacks to the World War backdrop are also well managed. The Howling Commandos aren’t wheeled out merely for sentimental reasons, what they are in fact doing is setting up the whole concluding part of the series, and showing an insight into the background of the program that will form the Black Widow.

So what do you guys think? Has Agent Carter earned her second series, or am I way off the mark? Sound off Below!