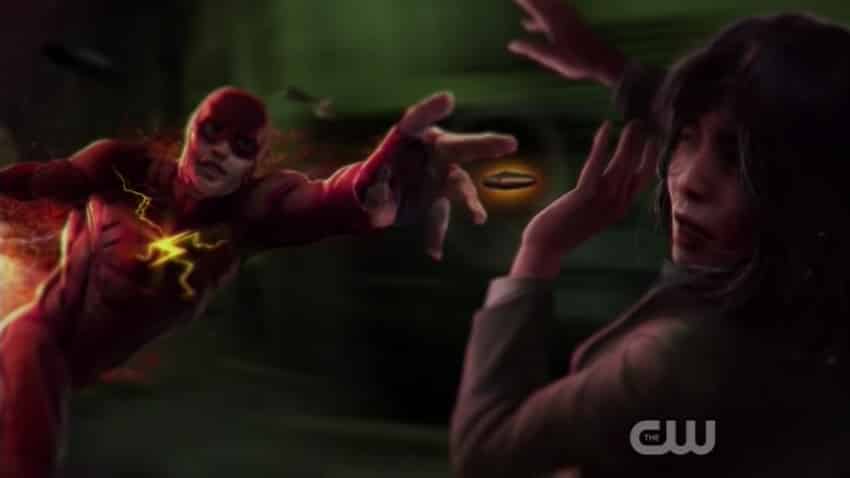 Hello my good people. Like many of you, I spent last night rejoicing in all the glorious news, revelations, and images of the upcoming content of DC’s films from the Dawn of the Justice League TV Special on the CW. One major revelation of the night was the first look at the costume to be worn by Ezra Miller as he plays his own version of Barry Allen. Right here is the best picture we have that covers most of the body ( I apologize in advance for the low quality, at the moment I am writing this there is no official high resolution release of this yet).

The costume is clearly identifiable as a Flash costume but it is very distinguishable from the costume in the comics as well as the one used by Grant Gustin in the current Flash TV Series (pictured below for reference).

Even though it is early and there is only a few pieces of concept art out at the moment,  I am going to be making an analysis of the costume based on parts and elements of the suit, looking at similarities and differences to the comics and the current TV show, as well as applying logic ( where it makes sense, keeping in mind this is still fiction ) and from there make notes and draw conclusions where I may.

The Flash Chest Insignia: Now between the pieces of concept art that have been presented, the Flash symbol on Miller consists solely as a lightning bolt, without a white circle encompassing it like traditionally seen on the costume of Barry Allen ( though in the first season of The Flash TV series and in recent Flash comics the circle was red instead ).

It actually bears more similarities to Jay Garrick’s lightning bolt in fact, as it is just a yellow lightning bolt surrounded by the red of the rest of the suit, albeit with the normal size of Barry’s bolt.

This might have been a design choice made in order to differentiate specifically between the movie version and the TV version of the Flash, but then again it might just have been the preference of the costume designer, who after all did make changes from the traditional look of Aquaman as well.

Chest and shoulders: The movie suit is bulkier than the suit Gustin uses on TV due to the fact Miller’s costume incorporates armor. This is a good idea, for well… reasons.

However, the armor itself does not appear too heavy or restrictive. You can see various points where there are joints and open gaps that allow free movement so as to not impede the Flash’s running.

Hands: In this next piece of concept art you can see is that the gloves appear to be fingerless. This is a bold choice, and one that confuses me. I can understand wanting to use fingerless gloves as when I wear gloves I do have trouble picking up small objects as easily for instance, but this concerns me particularly because of the danger of leaving fingerprints behind at a crime scene, something that Barry Allen as a forensic scientist should know.

However, there might be an element to this that has not been revealed yet or a specific reason for why the gloves are fingerless or how he can get away with it. Either way, we will have to wait and see, it will just bother me a bit in the meantime.

Head: A classic element of the Flash costume from the comics are the “earbolts”.

They have become a widely recognizable feature identifiable with the Flash, and have even been given practical uses in the comics, such as modifications designed by Barry Allen himself in order to be able to hear sound at supersonic speeds.

This is an element that is present on the suit of Gustin (pictured here ) in a much less developed sense in that they are flatter and do not appear to be specially modified.

Miller’s suit appears to have them even flatter still to the point where they might be painted on the helmet. If you can zoom in really closely, on both concept art photos above, you can just barely make out yellow streaks on the sides of the head. Barely but they do in fact appear to be there.

However, it is still interesting to note that for some reason the recent live action versions seem to be following a trend of becoming flatter as also observed with Gustin’s earbolts. This does make a certain amount of sense possibly thanks to aerodynamics and to try to make the suit sleeker, however the speed force has been established to create an aura around speed force users, one that typically frees physical problems like intense friction from being an issue to start with.

Suit Color: The suit is largely red, but you can tell from the concept art that there is yellow in a few locations including the chest, head, and arms. However, it still comes out almost completely red. The red in fact just hits you in the face practically. It is not really that big of a deal, it’s more of a nitpick on my part, but the lack of the typical white symbol on the chest means the color balance of the costume is off, like something is different. Because the Flash costume is always mostly red, however red wasn’t all you could see. Yeah I see the yellow but the red just sticks out even more. Again, a nitpick really, but still.

Then we finally come to the man behind the mask himself. We see Miller in this concept art above at a crime scene with his lab coat analyzing a piece of evidence, so in other words what you would expect a forensic scientist to be doing. I honestly can’t find much to be said here. Miller looks OK, however his hair is not blonde like his typical comics incarnation ( as seen below ), which is not a bad thing it’s just an observation really, since after all the hair does not make the hero (unless you are Medusa).

Conclusion: All in all, though we have yet to see it in live action and in use I think it is a pretty solid design. Adding some armoring makes a certain amount of sense especially with some of the ordeals superheroes tend to go through, and if I personally was designing and building a superhero costume, that would be a major priority. The lightning bolt symbol, while non-traditional, is acceptable and I honestly see nothing wrong with it, as it isn’t particularly out of place or unnecessarily distracting or anything of that nature. Miller himself, looking at that concept art of him in the forensic coat, if it is a solid portrayal then I can see myself believing that he is Barry Allen ( however of course that is highly dependent on the script, production, and Miller’s own acting in this role, which have all yet to be seen. ).

The color again is a small issue for me, but again it isn’t that big of a deal it’s just a matter of preference in terms of color balancing really.

The finger less gloves I hope at least is explained somewhere down the line, because again I don’t see why a forensic scientist would think exposing his finger prints is a good idea, and that is the main issue I have with this costume at the moment, especially since the concept art of Barry in his forensics lab coat also shows him wearing a rubber glove then. So I wonder why he would not wear gloves to cover his fingers in the field.

Besides that though, I would give it a 3.75 out of 5, at least for now, until we get to see more of it and get a better idea of what the suit will be like in live action.

What do you think of this analysis? Sound off below!

Sequel To TERMINATOR: GENISYS Has Been Cancelled
Bryan Singer Teases The Future Of The X-MEN Films
Advertisement
Advertisement
To Top