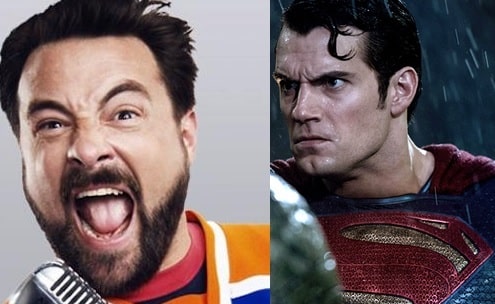 As I’m sure you all remember, Kevin Smith had a quite a bit to say about Batman v Superman: Dawn of Justice. It sparked controversy when he seemed to backtrack on his statements after a second viewing of the film, but then again, what doesn’t cause controversy these days?

While appearing on The Rizzuto Show, here’s what Smith had to say about the matter:

“I do a show called Hollywood Babble-on every week, where all we do is talk about entertainment, and we make jokes too so we’re like “ooh, these are great pull quotes”, particularly in the case of Batman V Superman, which I liked, but I read all over the internet about how much I hated it. Kevin Smith hates Batman V Superman.”

‘Isn’t that weird that you know like, that I even saw it, let alone how I felt about it twice? And that shows you like that we live in a click bait world where somebody is like look, it counts as news. Why? Because one guy who makes movies saw another movie?”

“Then I got fried on the internet for changing my opinion, saying like “he’s a lackey that belongs to Warner Bros! They got to him!” There was one tweet that made me laugh that was like “Did they get you? Blink if you’re hurt.” But it was like can’t I just change my opinion? Like I saw the movie twice, and the first time I saw it, like here, I didn’t really change my opinion. I liked it both times, but one thing I said about the first viewing was like “I didn’t see where the heart was. It didn’t seem to have much heart. It had a lot of spectacle but no humor and heart, and then when I saw it the second time with Mewes, I was like oh, the heart is in the viewer because like I had a moment with Mewes where we’re like parademons, and so there was heart, heart enough for me, and then people were like he’s got a heart-on and stuff like that, and starting tearing me apart for flipping the script and for changing my opinion. There was one internet story I was reading where they’re like “of course people are entitled to change their opinion upon a second viewing, except him” like you know, essentially I couldn’t or whatever, but again I didn’t change my opinion, I liked the movie both times.”

You can read what Kevin Smith initially said by going here and here. You can also check out the latest interview below.

What do you think about this? Sound off in the comment section below!